Four season tent – check. Skis, boots, skins – check. Beacon, shovel, probe – check. Harness, rope, ice screws, crampons, axe – check. Beer, whiskey – check. Reindeer sausage – check. “You sure all of this will fit?” Camera gear, radios, stove – check. We sat in Sage’s basement meticulously packing all of our gear into the sled and respective packs. Preceding this was a full day of frantic running around Anchorage ensuring that nothing was forgotten for five days of camping and skiing. By mid-afternoon, we set off along the Seward Highway en route to our destination.

I was taken aback by the surrounding scenery as we drove along the Turnagain Arm. This was the first time that I have ever witnessed such dramatic peaks arise immediately from the ocean. Sales informed me that this body of water has some of the most dramatic tidal ranges in the world. As the tide ebbs and flows during the colder months of the year, car-sized blocks of ice will be traveling along the inlet as if they were another vehicle on the highway. No such frozen cars today, but there was a fair share (read: more than one) bald eagles flying overhead – perhaps an omen of good things to come.

A short ninety minute drive had us at the turn-off where we would embark. The route we selected was a fairly mellow skin that would have us at the planned campsite well before sundown. In hindsight, we should have left in the morning allowing easier transport of our sled, which at this point weighed well over a hundred pounds. Our timing was largely centered on Sage returning to Anchorage in a few days to board a flight to Chicago for the start of med school, leaving us with no choice but to depart this afternoon. Sage bravely volunteered as the first sled mule and we set off at a less-than blistering pace along half-frozen, half-cream corn snow. Less than five hundred yards from the start, the sled had already tipped over, requiring two of us to assist in getting it back upright. This was going to take a lot more effort than we had originally hoped. 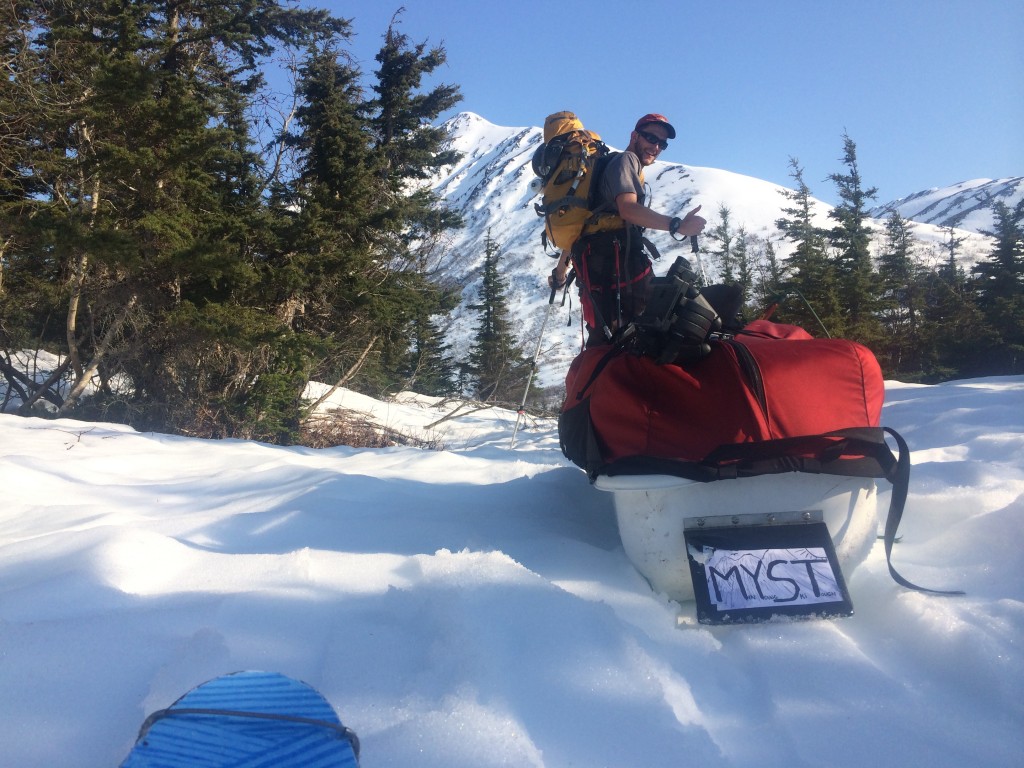 Spirits were high despite the slog. Smiles visible, jokes aplenty, even as we lifted the sled upright time and time again. Two hours in, after some bushwhacking and a change of course, I hopped in the saddle despite knowledge of some inclines ahead. This wasn’t so bad. Aside from a few tip-overs here and there, it was relatively smooth sailing complete with a hundred pounds strapped to my hips. We approached our first sustained climb for about a half mile, maybe a fifteen to twenty degree slope at its steepest point. This climb might as well have been vertical. In the two hours it took us to get to this point, it required another two hours to ascend a quarter of that distance. At its worst, Lange was carrying Sage’s skis as Sage pushed the sled from behind because I could no longer get the thing to move under my own power. The smile was gone from my face. By the time we crested the ridge, it had been five hours since we left the car. Exhausted from two hours reminiscent of power sled workouts for soccer, I handed sled duty over to Lange for the final push as I basked in my new found fleet-footedness.

Still short of our intended campsite, we settled on a level plot of land sheltered by tall trees on all sides. As the other three began to dig a solar well and pit for our fire, I set off on a brief recon mission to see where we ended up. Fifteen minutes above camp, I first got eyes on Kickstep and the surrounding zone. It was just as it was described to me, except for the fact that the spine face to the north was all but melted out and wet slide debris was visible on just about every aspect of the compass. Changing over, a smile came back to my face as I linked some downhill turns through the trees back to camp. Finally! I made my first turns in Alaska.