Jan. 3rd: I left a few days ago to embark on a spontaneous journey to Japan to experience the deepest powder on Earth, at least that’s what I have been hearing about my whole life. I am here now. It has been an incredible week so far, and the landscape and energy of this place have already moved my spirit.

Like all my travels, the trip started out with no place to stay, sleep, or eat and the rental car shop was closed upon our arrival to Sapporo Airport. Searching through my backpack to see what would work for a pillow and a nice spot on the airport floor, we just so happened to stumble upon a 24 hour Onsen – a spa type atmosphere with hot pools for ultimate relaxation, which in this case, also happened to accommodate travelers IN the airport. Was this real life? Our tired, sore bodies were presented with robes at the door, slippers, ramen and a room full of recline-able chairs to sleep. We awoke rejuvenated and strolled around the Sapporo airport which resembled a course from Mario Cart, lots of flashing lights and animated features. After exploring, we hopped into the rented van, crammed six ski bags, 6 duffle bags, camera equipment and our bodies into limited space and headed off to Hokkaido, the northern island of Japan.

Driving to Niseko, I felt as if I was a five year old driving to Disney Land for my first time. My heart was pounding heavily and my eyes were bulging out of their sockets. There were massive snowbanks, fluffy pillows on every house and building, glowing arrows to keep the driver aware of where he was going, and a plethora of ski-able terrain with every turn of the head. We all took turns pointing, drooling and yelling, “that line looks DOOOOOPE!”. 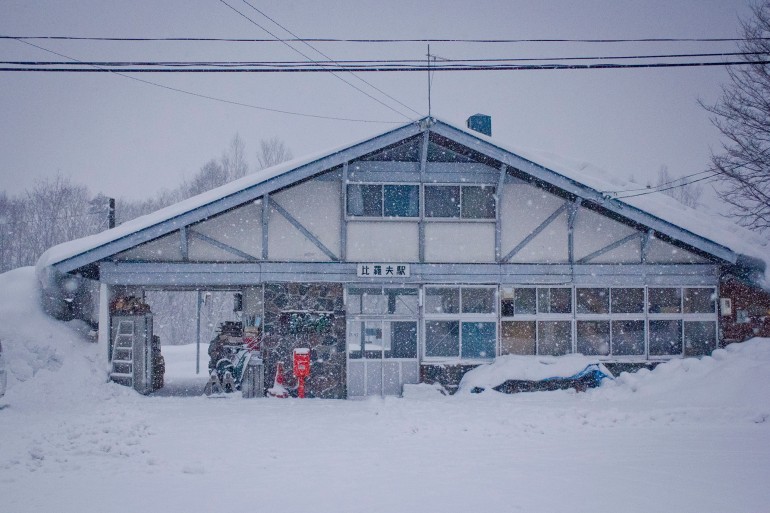 When we finally arrived in the village of Niseko, we hastily put on our ski gear and hit the slopes for some evening riding. No time for warm up runs! We hit the trees where we remained until it was too dark out. It was the first time I had my Mini-Gun skis from DirtyBird Skis in the deep and oh man did they charge. With a 109mm footprint and set for touring  – they were my only pair of skis I had brought on the trip which were more than perfect for all conditions.

With a taste of Japan’s finest snow, our giddy selves enjoyed a nice ramen dinner and started to experiment with the different libations that Japan had to offer… we are after all thirsty pow stuffed ski bums. 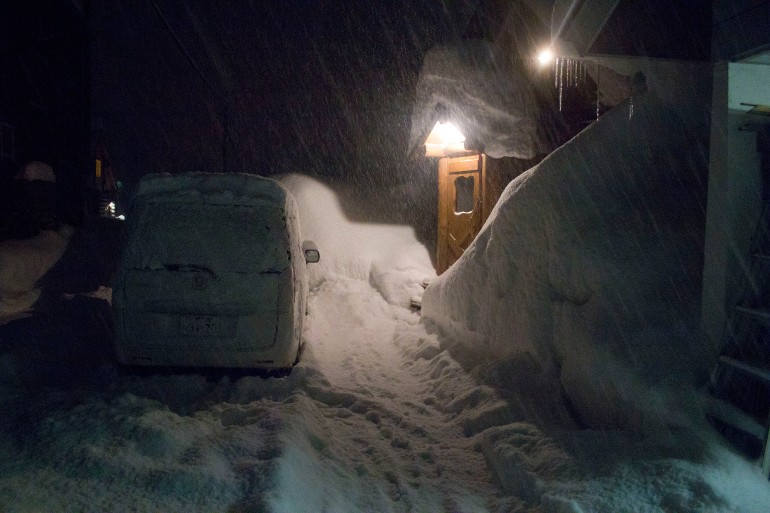 Our tiny abode next to our van in lots, and lots of snow! Photo: Kade Krichko

Some few days later: We are staying in a cabin next to the Hirafu train station, a quaint spot outside of the Niseko village. The Kiri Krew (Kiri is Japanese for MYST, the name associated with our crew) and I have been extremely grateful for this small, yet cozy spot. It is outside of Niseko’s proper village, which is refreshing because it allows us to escape the alarming amount of tourists and party animals. The curator of the property is a man named Yoshi, who has spent 10 plus years managing the small cabins surrounding the train station, which he operates as a hostel and notably built himself. The 6 members of the Kiri Krew make our own parties. Just give us a couple bottles of sake and the upstairs of our small abode turns to the Sake Lounge.

Waking up in Japan is better than waking up on Christmas morning, better than waking up to breakfast in bed, and damn if I say it, even better than waking up next to Brad Pitt. When your eyes open and you look out the window, you see nothing but a white mist, snowflakes elegantly falling and stacking on top of one another, forming huge mushroom-tops on every single object . Your hangover, from too much Sake and Sochu, instantly vanishes, because you know you are about to have the best day of skiing of your life. Again. and again. And again.

Japanese bakery – something to hold us over until after pow sesh. Photo: Kade Krichko

Outside of Niseko is a resort called Rusutsu. While here at first, you may experience feelings of nostalgia, because of the giant roller coasters next to the chairlifts. Other times, you feel like you have entered the twilight zone. Rolling into the lodge, your typical hot coco machines and chili galore are completely MIA. Instead, there is a giant talking tree, carousel, and Japanese arcade games with beer vending machines and churros for sale. 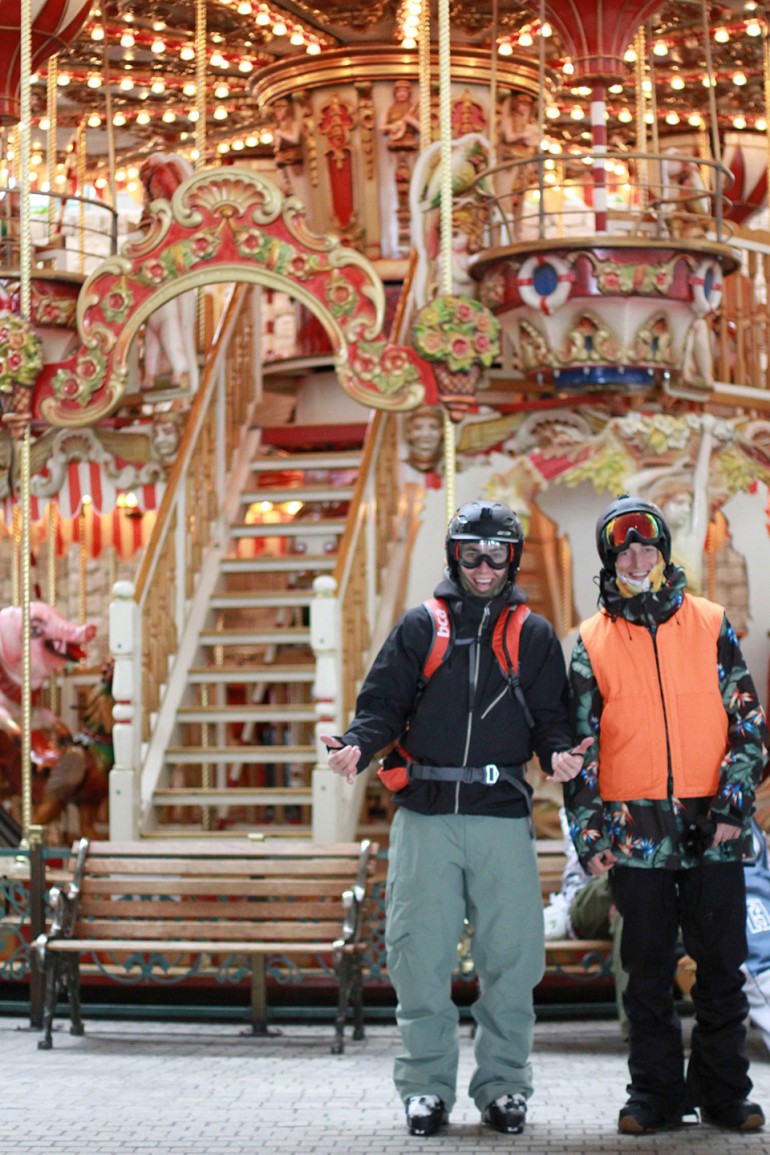 Rusustu Lodge, another day in the life. Photo: Kade Krichko 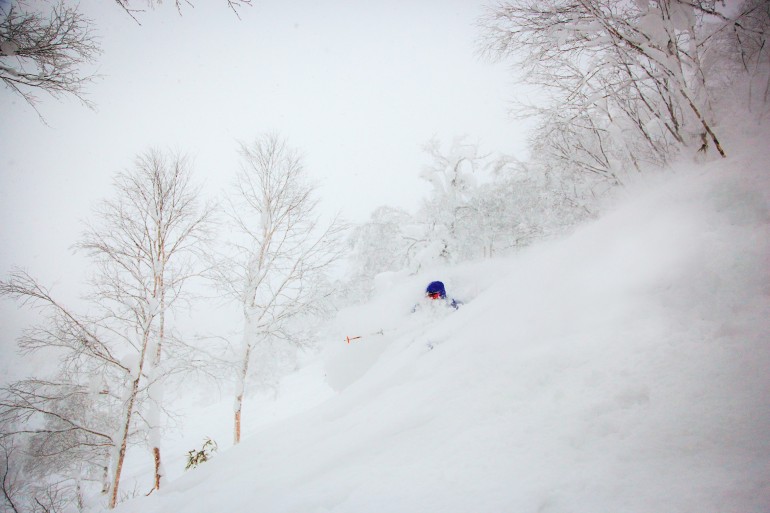 Once on the mountain, you let go of this bizarre reality and enter Japan’s infamous white room. During my first turn, I sunk 6 feet into Japan’s heavenly depths and immediately popped up to only be finding myself diving into another six feet of fresh pow. At one point, I had to ask myself, do I know how to ski snow THIIIIS DEEP… and instantly found out that 1.) YES I DO, and 2.) it’s the shit. Rusutsu may not offer the steepest of terrain, but the thought doesn’t even cross your mind when you are skiing untracked all day. There are plenty of pillows to smash, trees to jump through, and rocks to huck your meat off of. The trees are perfectly spaced and capture the vibrant and mystical energy Japan is known for. Our time at Rusutsu has been astounding, yet comical. Leaving Rusutsu, one has to stop at many of the 7-Eleven. Yes, 7-Eleven, the convenience store. Not your typical après scene, but when ‘sevs’ are serving Strong Zeros, seaweed triangles, mini pancakes and hot meat buns, it’s undeniably satisfying. 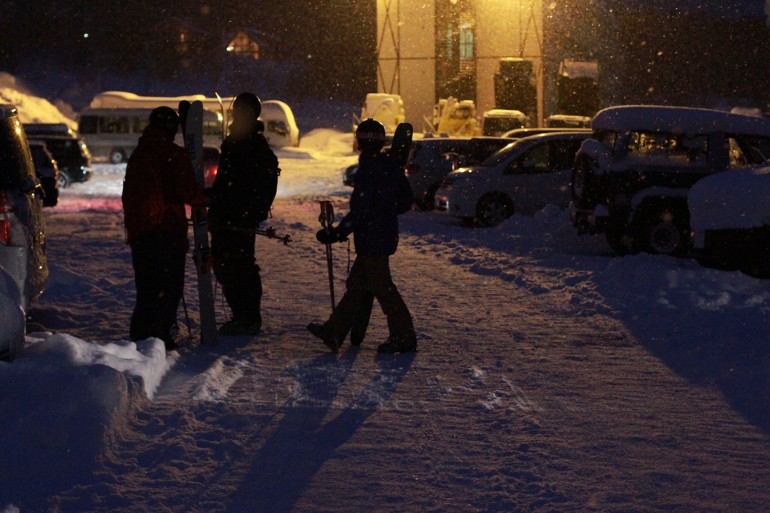 Packing up after an awesome day at Rusutsu. Photo: Kade Krichko 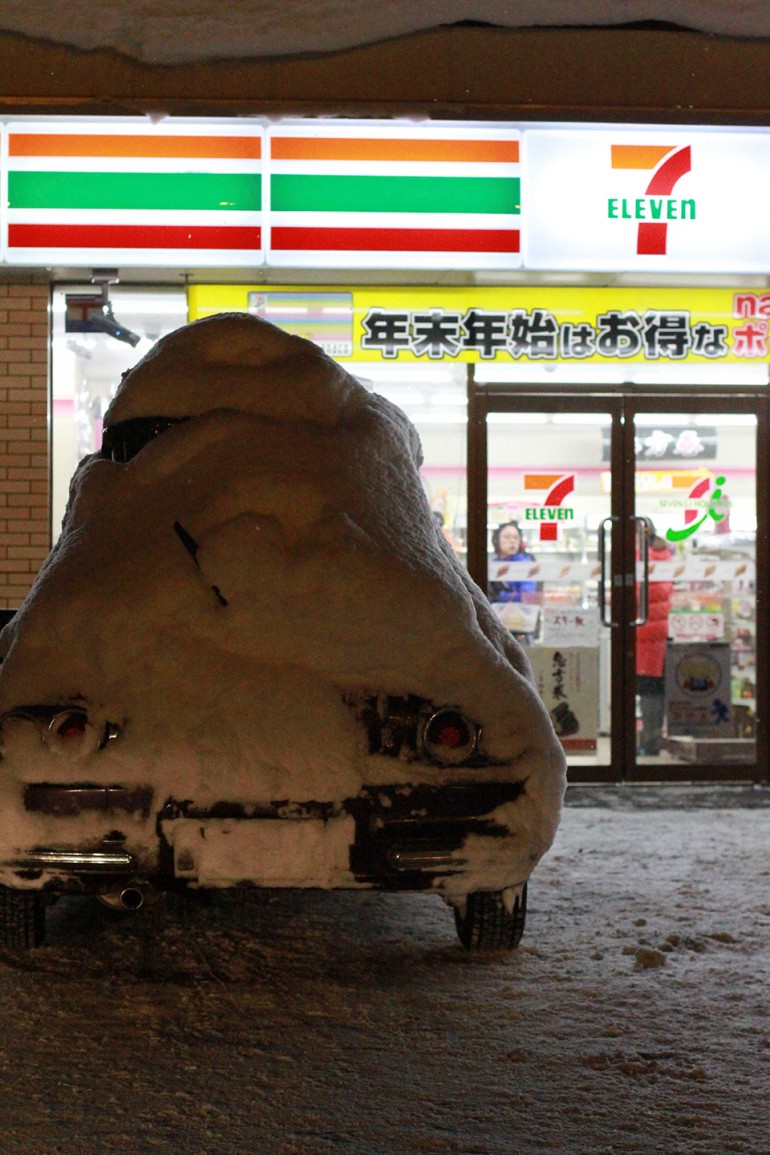