Sometime in January: It continues to snow, and I continue to change. Being fully immersed in blower pow is where I want to be all day every day, and Japan is turning it into a reality. There is an absence of thought and a taste of bliss when one is gliding through bottomless pow, it truly nourishes the soul. The Kiri Krew has gotten a taste of several of the local resorts including Grand Hirafu, Annapori and Rusustu, all being awesome in their unique way.

The best turns of this trip, however, has been at a smaller and more low key resort called Moiwa. The pow fields at Moiwa were closed for four days due to chairlift maintenance, and we made sure we were at the opening gate when it was ready to open. At first I was nervous, because the lift line was starting to resemble the tram line at the Bird, we were surrounded with pow-hungry locals and stoked-overloaded tourists from all around the world. But worry not, we  somehow skied untracked for the first ten runs and then still found stashes until last bell. 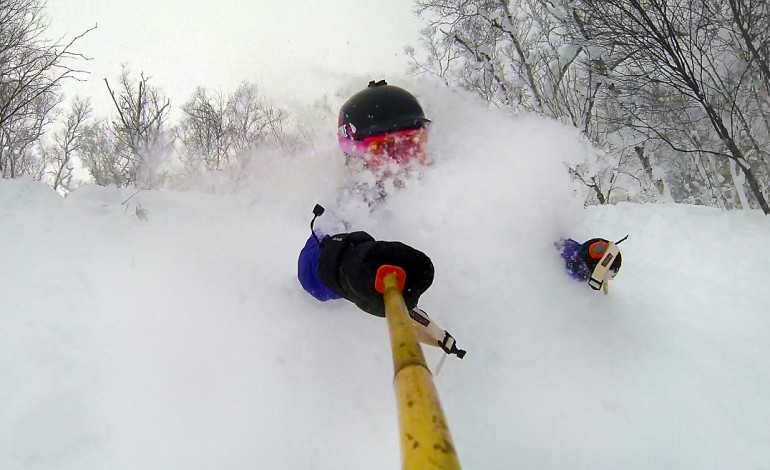 When you are skiing in Japan, there is no time for lunch, bathroom breaks or any kind of stopping for that matter. You have legs cramps? Ski through it. Your stomach is eating itself? Ski through it. Goggles fog? Welp, your skiing blind anyway, so who needs good vis. It isn’t until you are in the parking lot loading your gear into the van when you realize your limbs have become ramen.  But it’s OK for your joints to want to burst, that is what the Onsens are for.

After skiing, we have been revitalizing in the Onsens at Goshiki, a very small village (more of a zone) with an abundance of terrain to tour. Onsens are hot pools that are naturally heated from the volcanic surroundings. Men and women are segregated and can only enter naked. The Japanese believe entering naked is a way to break societal barriers, however you have to enter clean as a fermented bean and wash yourself in the bathing areas provided. I have been fortunate enough to have these gems to myself, it’s where I reflect and pay homage to Japan’s mountains. I’m truly thankful to be here. 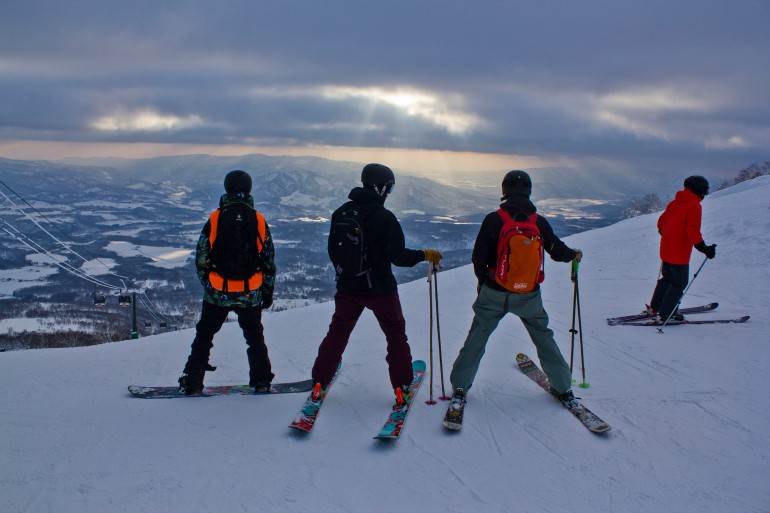 Sun peaking through the clouds at Annupuri. Photo: Kade Krichko 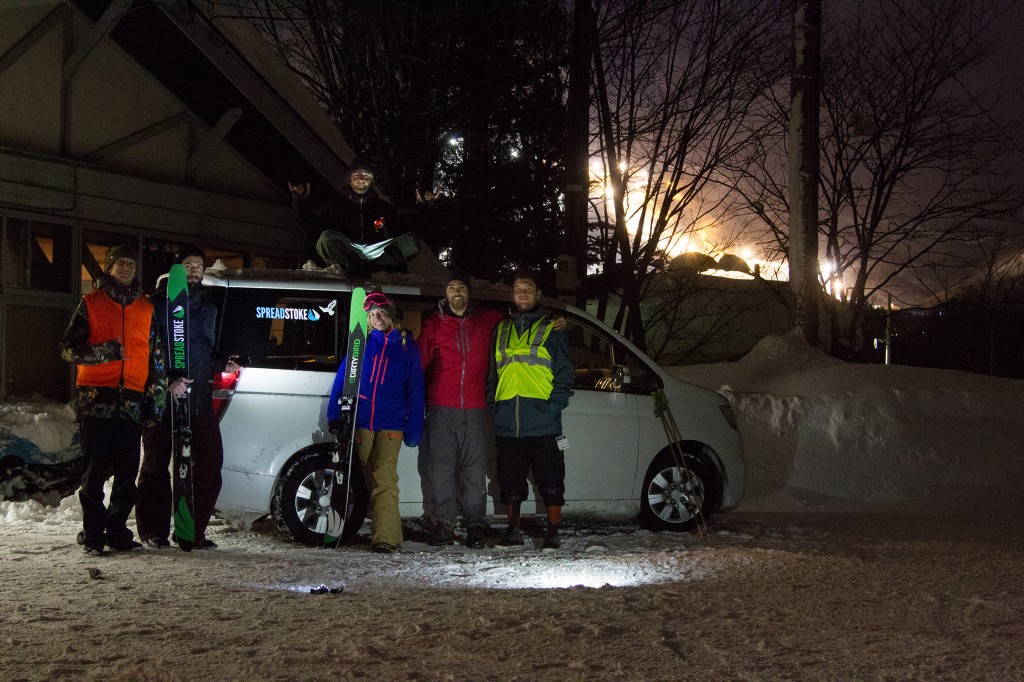 The Kiri Krew in Japan posing with some primo custom Dirtybird boards.

The Kiri Krew has a new addition to the team, a free-spirit from Nova Scotia that is residing at the Hirafu Train Station. Matt, also known as Lordly, met us while making breakfast in the common kitchen while laughing over GoPro footage from the night before. After accessing to see we weren’t totally out of our minds, he decided to tag-a-long on some of our adventures to find the deep! Lordly brought a lot of stoke to the trip with his photos from Nelson, BC and a serious passion for snowboarding. His warm presence reminds me why I love to travel so much, the people you meet are always as good as the places you go.

These resort’s in-bound terrain have exceeded our expectations of japow. However, we have also be fortunate enough to tour Goshiki, an area outside of Niseko, sprinkled with trees and untouched powder snow. Just lapping under the tree line, we ascended and descended until the sky grew dark and our legs were ready for the Onsen. It is usually this time of evening where I  spend a good portion of the night dedicated to getting the massive dreads that have formed in my hair. 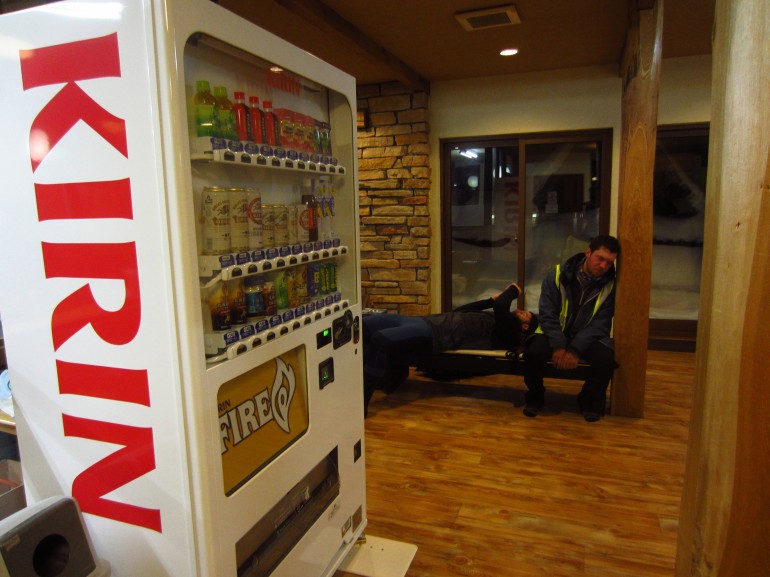 Snoozin after a long day shredding and marinating in the Onsen. Photo: Matt Lordly –

When people have asked me “Who are you traveling with?” and I respond with “5 guys”, the consistent raise of eyebrows and unfiltered expressions have been quite funny.  If you know me, I’m quite use to being the ‘only’ girl.  Don’t get me wrong, I have an incredibly close knit group of girls I hang with that all shred as hard as they dance, but for some reason, I have always found myself able to really connect and bro-down with the dudes.  That said, I was still slightly nervous to go on the trip knowing I would be immersed in smelly farts, mildewy socks and non-stop ‘your mom’ jokes.  I have to say, I have loved every bit of it and I wouldn’t change the dynamic of it if I could.  These guys are the brothers I never had. They push me to hit cliffs, keep charging, and take that next whisky shot.  My abs hurt from laughing so hard at their ridiculous banter and my heart melts when they offer to carry my heavy luggage.  The Kiri Krew is not gender specific, all it requires is being stoked (albeit not ODing on stoke), and loving every minute of the pow-filled life we are experiencing. 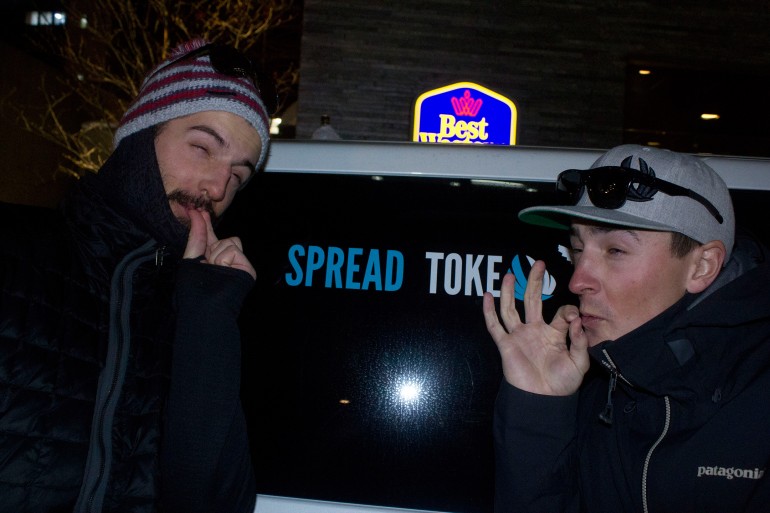 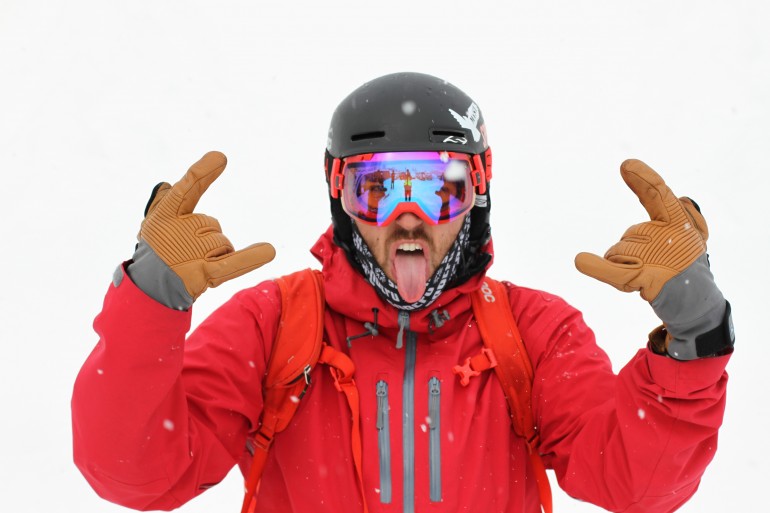 Eric Sales in front of the camera instead of behind it for once. Photo: Kade Krichko

Found an awesome ‘quilt’ map of Niseko while enjoying drinks trying to figure out where the hell we are! Photo: Kade Krichko 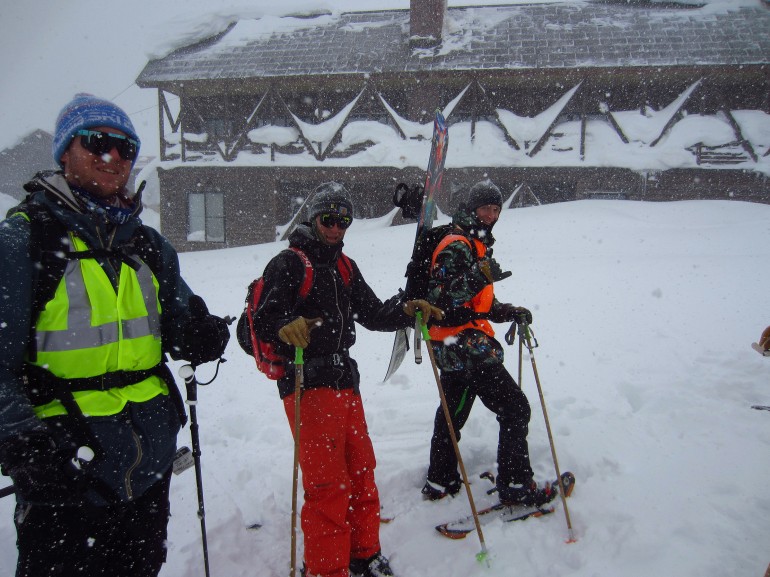 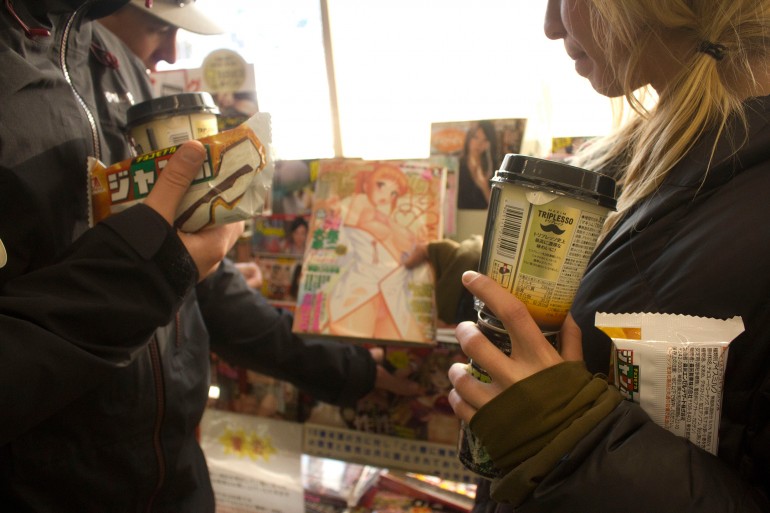 The ‘Japanangeletti’ getting after it, pillows for days! Photo: Eric Sales

One thought on “Japanuary Chronicles – Part 3: Is This Real Life?”