The air is becoming crisper and the wind is transitioning from welcomed relief to the bringer of chills and goose bumps. Winter is upon us and if I have learned one thing from my time in Utah is that winter can sneak up on you like a gangster doing a drive-by in a Prius. These coming signs of winter combined with a recently announced contest by Go Pro gave me enough motivation to make the trek down south to Green River.

This trip would mark my 9th trip down to the River of Green but I’ve always stuck close to the car and if I ventured out far, it was only to ride a line with enough time to head back. I’ve always wanted to pack out, set up camp and spend the night out which would allow me more time to explore and travel out further than previously possible. Recently, I acquired a legitimate backpack for long backpacking excursions and decided to give it a whirl. 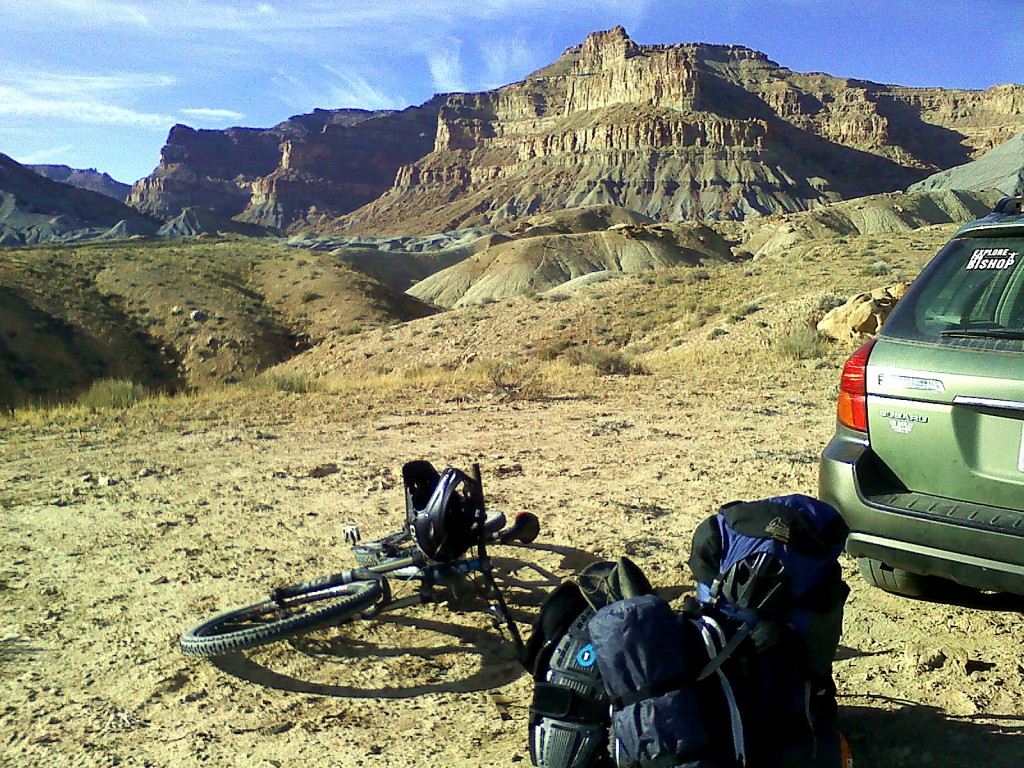 Between my normal job and doing the odd job for my landlord, I was able to sneak away for two days. After completing some early morning work, I packed up and ventured south. Driving as far as the BLM roads would allow, I ended up parking my Subaru into the general area where I wanted to explore and packing in from there. This was a learn-as-you-go process for me and it was an unusual sensation walking a bike out with 60lbs of camping and riding equipment on my back. 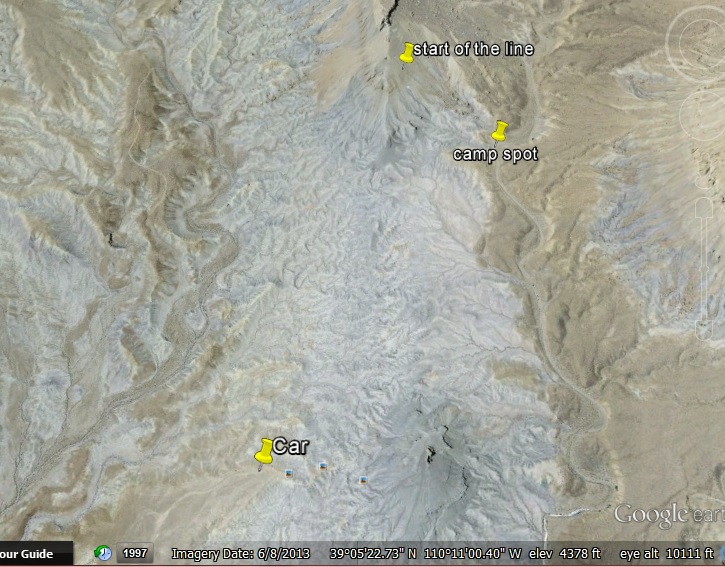 While I’m not sure how far out I hiked out, this gives some perspective

About an hour into my journey to Mordor, I found myself walking through a gully that dumped into a riverbed. This seemed like a cool way to finish off a line so I set up camp on the edge of the dry riverbed and begun my hike up the hills to see if a line could connect into the gully. To make a long story short, I found one. After a couple hours of hiking about, the sun began to set (approx. 5:45 PM) and the temperature dropped dramatically so I decided to return to camp and hunker down for the night. 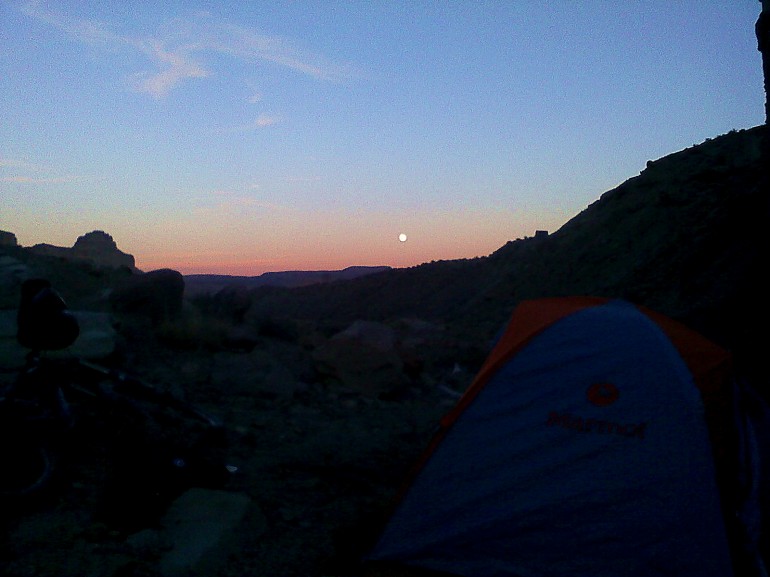 Awaken by the ambient light of the sun reflecting off the orange and tan rocks at the base of the next mesa over, I began the morning ritual of kratom, granola bars and water. Eventually the sun crested and bathed my tent in its comforting warmth equivalent to an embracing hug from a loved one. It was time to mount the iron steed and to attempt to ride the line I scoped out from yesterday.

The top of the line starts out steep and loose with shale rocks peppering the landscape. With no discernable line, I had to aim towards recognizable areas with hopes I wouldn’t run into a rock poking out at an odd angle. Afterwards, the line dumps you onto the classic Green River spines where you eventually were dumped into the gully. Mini-wallrides to be had, the gully was the icing on the cake. 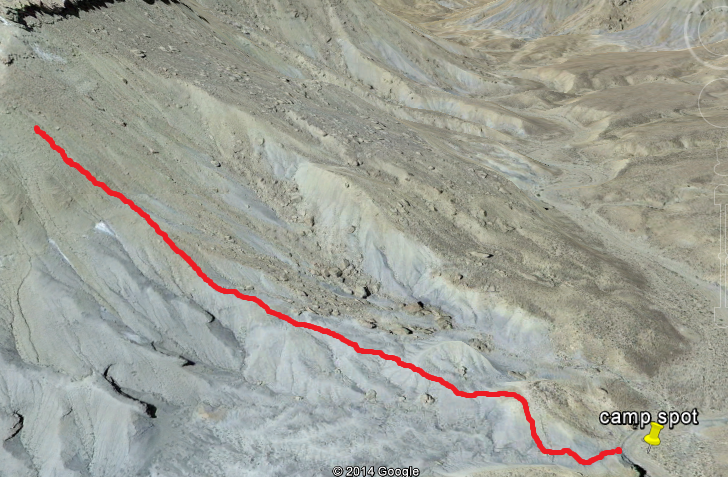 An overview of the line

When hiking this far out by yourself, being safe is a top priority and in this case, there was only enough time for one attempt. This one attempt was further rushed by the fact that due to my location, the sun had already begun to set behind the mesa at a rapid pace at about 1:30 PM. After reaching the top, I took about 5 minutes to get my gear on before dropping in. 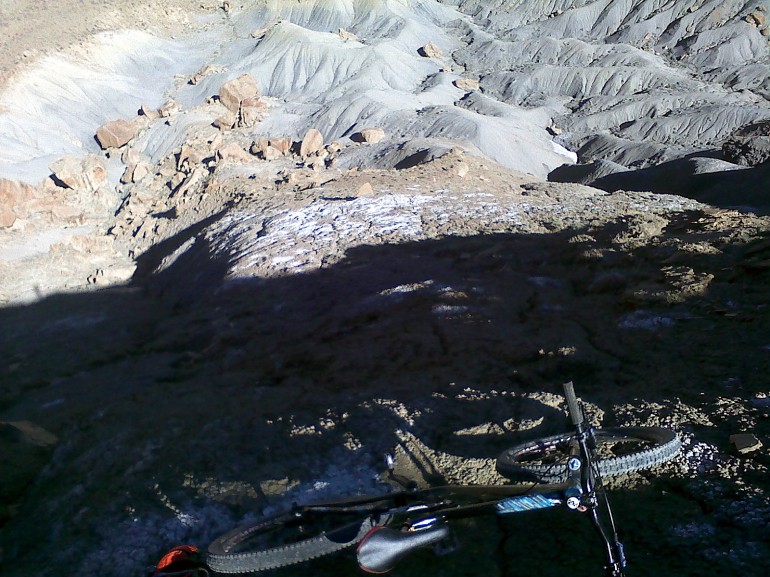 View from the top of the line

My ride down wasn’t near clean as I had to dab my foot/dismount my bike in the top section and in a lower portion during an awkward climb up to a narrow traverse across. These dabbles disqualified my footage from being included in the Go Pro contest so I’ve included it in this bastard child of a trip report.  Hopefully next time I’ll be able to clean this line which I’ve dubbed the Gutter Slut. Thanks for the name inspiration Stan (Dan) Brown!

Editor’s Note: Check out Scott’s other bike edits on his Vimeo channel.