Mecca Awaits Just Around the Corner in Brule Alberta

When I first came to Brule, Alberta, I was profoundly excited at all the mountain biking potential it so quietly held.  I imagined there was a world of trails waiting, wanting to be discovered. Sitting in the yard, I would look at the mountain for hours. It was a strange combination of hoping and knowing there was an epic trail on her, waiting to see the love of a mountain bike.

Slowly, bit by bit, I am familiarizing myself with this place. Talking with locals and neighbors to get every little bit of information on what exists out here. However, with so much high quality riding in Hinton, Jasper and just outside of Brule, it has taken me a few years to find the riding right here in town. Knowing that if it didn’t already exist, this place was ripe, and perfect for building it… or maybe just restoring it. Brule sits right on the Jasper National Park boundary, and the area is full of nearly 100 year old mining roads, old prospect trails, and ruins. 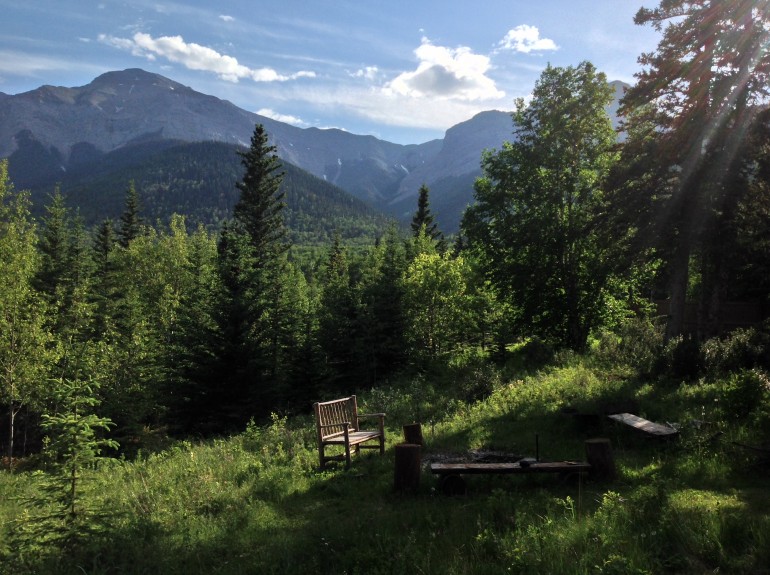 Yesterday was a throwback. I ventured out and up to the Brule graveyard. A final resting place for many of the Groat family, among others, who helped make this region, and this province what it is today. I only meant to ride up there to see it, as I had not previously taken the opportunity.  Too busy riding the well known trails around our community pasture, nordic centre and Hinton, I began falling into the belief that nothing lay on that mountain but bramble and bear shit. I longed for single track.

I wasn’t prepared for a big ride. There was a half litre of water in my pack, 15% battery in my phone, and I had no idea what I was about to find. No camera, no tracking the ride, a raglan t-shit, no knowledge of what lay in front of me. I only knew these three things.

The bugs were bad. There was bear shit on the trail. It was over grown in many places. I ran out of water and filled up at the creek. I have no idea how far I went, or how much vertical I covered.  I kept riding this old single track as it wandered up and down and back up along the hillside below the mountain. Flowing S turns took me from a climb into a descent,  switching back into a climb. Every time I thought it petered out, I would come across an intersection.

This was the throwback. It was like falling in love with this sport all over again.

I couldn’t ride every trail I saw. I never rode the same trail twice, and I was able to do a complete loop back to the graveyard road (which is 52 st. oddly enough, in a town with only three streets!). This region has so much hidden potential to be a world class destination for our beloved sport. In many ways it already is. But I can’t help feeling there is a piece of that puzzle, waiting to be dusted off and joined with the rest.

I was in full pursuit of a dream, atop a bicycle, our noblest invention (thank you Stance films for “Life Cycles”).

This summer, pursue your dreams and fly by the seat of your pants once in a while. Seek out the adventurer within.

Spread stoke, go far, and BE in the Mountains.

My Mother and Father gave me a love for the mountains, for the peace and the challenges they can offer us. “Go west young man” Dad would say, and into the front ranges we would go. West has always felt like the right way to travel. Often I would ask how much further we had, and every time, his answer was “just around the corner”.
Read More Posts By Jay |
Follow: