After his death-defying tumble over a 30 ft. cliff at Red Bull Rampage last October, Dustin Schaad spent the next two months in Tahoe mending a dislocated ankle and a sprained wrist. Pretty minor injuries considering, some might argue, Dustin’s err “might be the most hideously spectacular crash in the history of mountain biking.” But, Dustin was broken more by his failure than the actual impact of the crash. His biggest injury was the living nightmare he experienced, replaying itself in the back of his head during those two months of rehab. See Dustin’s Wild Crash here.

A few weeks of physical therapy allowed Dustin to get back on pedals near the end of November, but there was still only one thing on his mind. Late autumn dirt was riding well, and with only a couple days back in the saddle, Dustin was quickly over the tease of the trails and oozing at the idea of some big mountain freeriding before winter. The replay continued to bother him though, and he knew the only way to rid himself of the bad memory was to replace it with a better one. He had ridden cleanly through his line in practice the day before qualifiers. He knew he could do it again. The hurdle was convincing himself once more.

Plans were made for redemption. The mini-van was packed to the brim, and Dustin and I headed south from Salt Lake City to meet up with videographer Adam Clark at the Rampage venue in Virgin. It was the first week of December and none of us had ridden in the Utah desert that late in the fall, so we weren’t sure how conditions would fare. The weather was calling for lows in the teens and a possibility of snow. Dustin seemed determined not to end his season with the bad memory lurking, so we decided to play down the forecast and take a chance on adventure.

The original plan was to scope some terrain near Green River to warm-up on, but as we got halfway through Spanish Fork Canyon, our concerns about the weather became a reality. Snow blanketed the mesas and a deceivingly thick mud by the roadside looked challenging enough for a four-wheeler, let alone a two-wheel drive mini-van. We pulled over and sat in silence for a bit contemplating the chances of similar, unrideable conditions farther south. Another 5 hours on the road to get skunked didn’t seem too enticing, and I could see the disappointment eating Dustin up inside. He finally broke the silence and asked if we should turn around and wait for spring. There was only one question I needed to ask to get an instant decision – Do you wanna ride bikes or not? 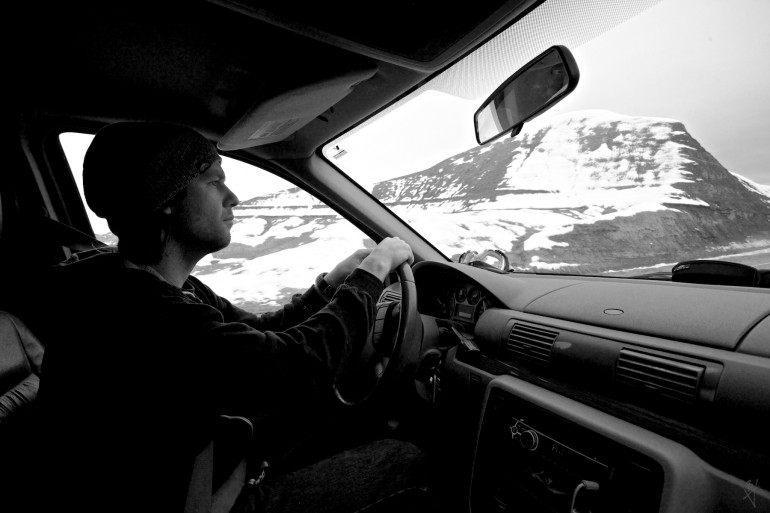 When we rolled into Virgin, chance turned to fortune. Blue skies and dry dirt welcomed our arrival, and the stoke meter was back to 10. We cracked a couple beers and setup camp as the sun sank behind the Red Cliffs Conservation. An early sunset made for a long cold night by the fire, but a little tequila and some local entertainment in the form of shooting stars and coyote calls helped pass the time as we made plans for morning. 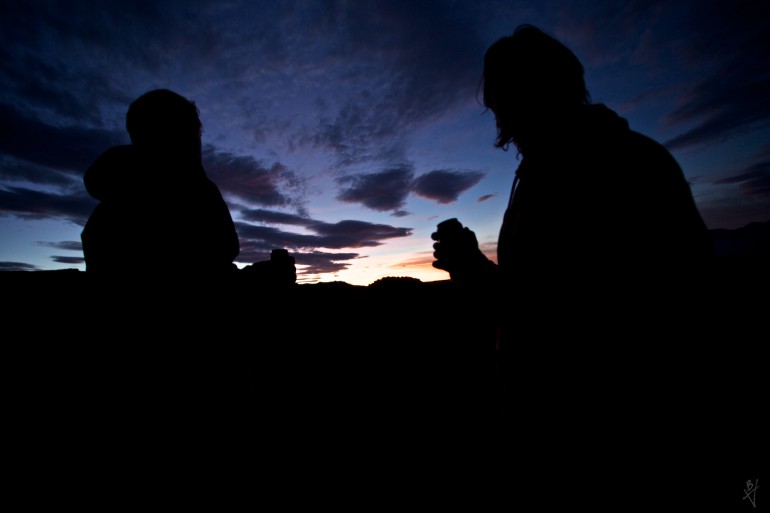 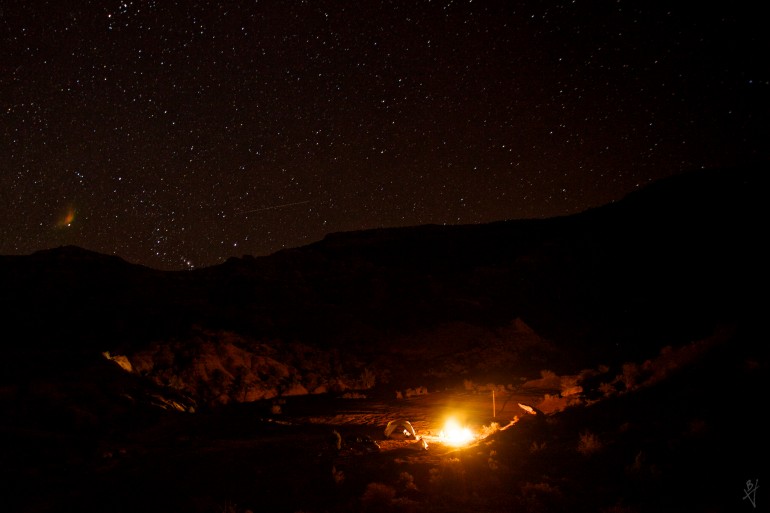 A huge temperature gradient had turned the dirt to frosted concrete overnight and unfortunately, frosty dirt thaws to a thick, sticky peanut butter. A little maintenance was needed to scrape the mud off some of the in-runs and lips receiving direct light in the morning. It was a little concerning until we realized the sun was baking it back to tack as the temps rose out of the teens and into the sixties by midday. West of camp though, snow from a couple days prior was still visible on the taller mesas, and an updated forecast showed a huge winter storm from the north would be arriving soon. 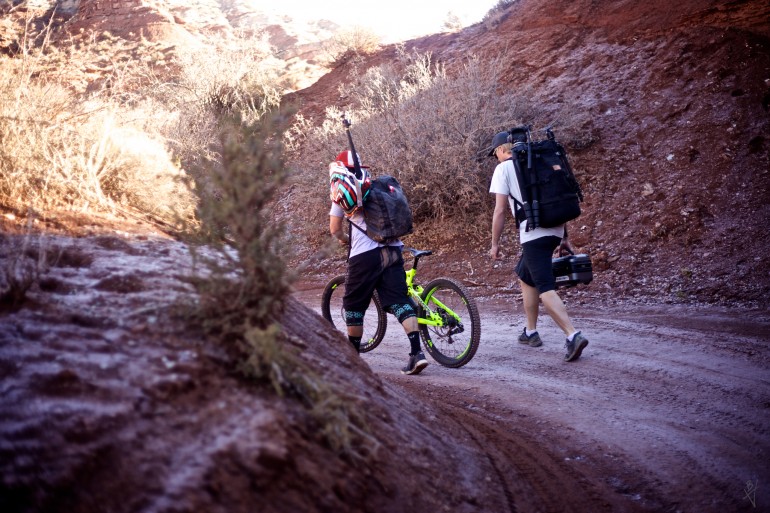 We worked our way up the venue removing mud on a few lines for Dustin to warm-up on. A grimace here and there was evidence of the lingering pain in his joints, but it wasn’t going to keep him from accomplishing what he came back to Virgin to do. There was no contest pressure, but Dustin did have a few challenges to overcome. It was his first time back on a big bike after the crash, riding solo in one of the gnarliest freeride locations on the planet, and trying to grease the line that almost ended his season if not more. 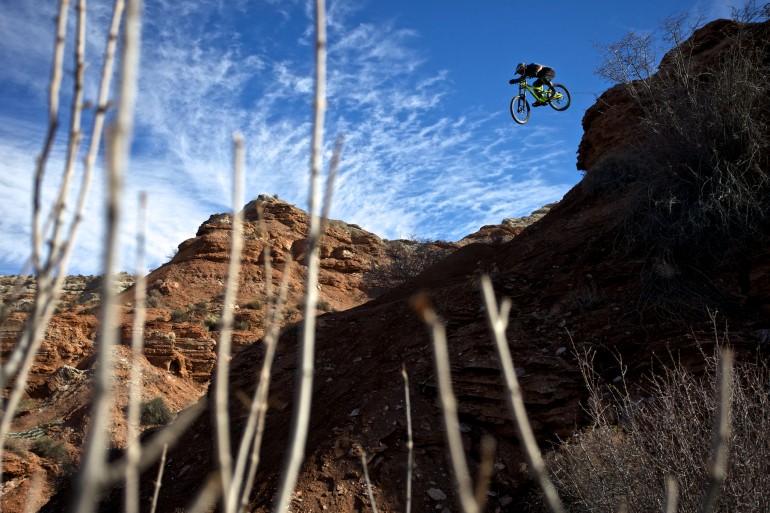 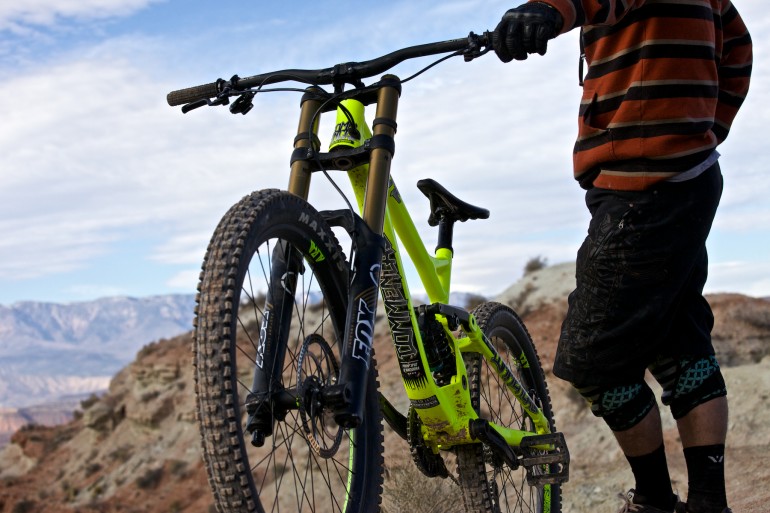 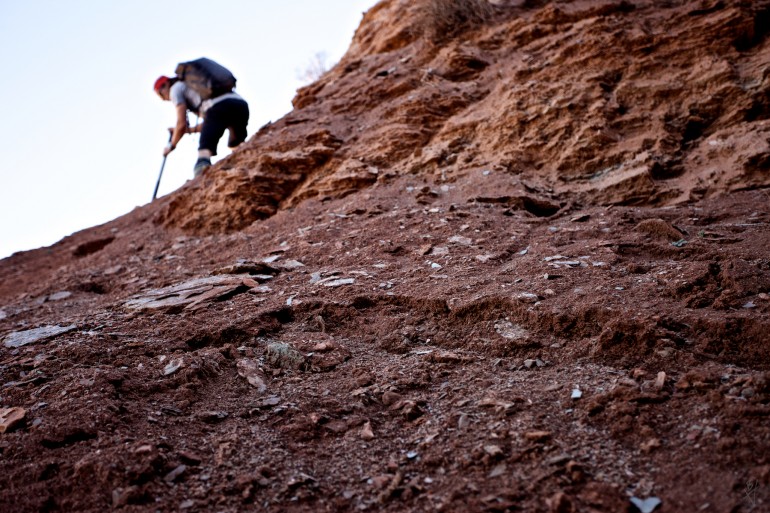 Once Dustin felt comfortable enough to give it another go, he rode into the top section a couple times, stopping at the beginning of the technical cliff he had fallen down in qualifiers. Below him he could see the bomb hole his body had left in a small patch of dirt, surrounded by bone crushing rocks. Dustin laid his bike down and crouched at the edge of the cliff for a while to meditate before hiking back to the top. 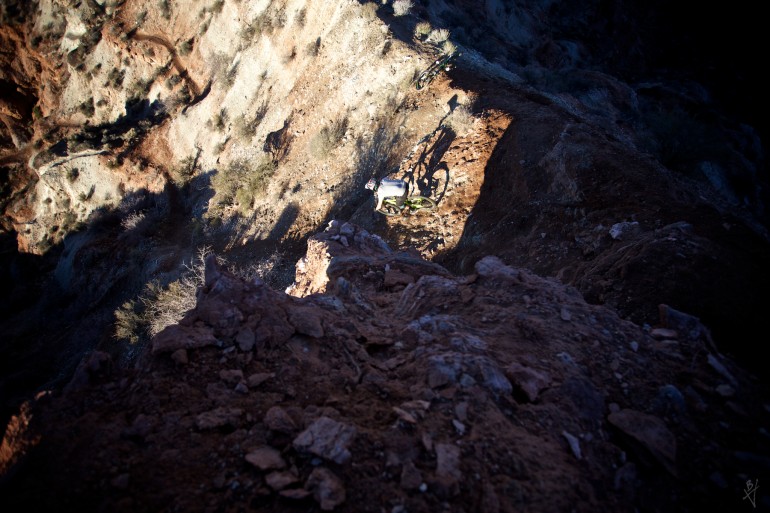 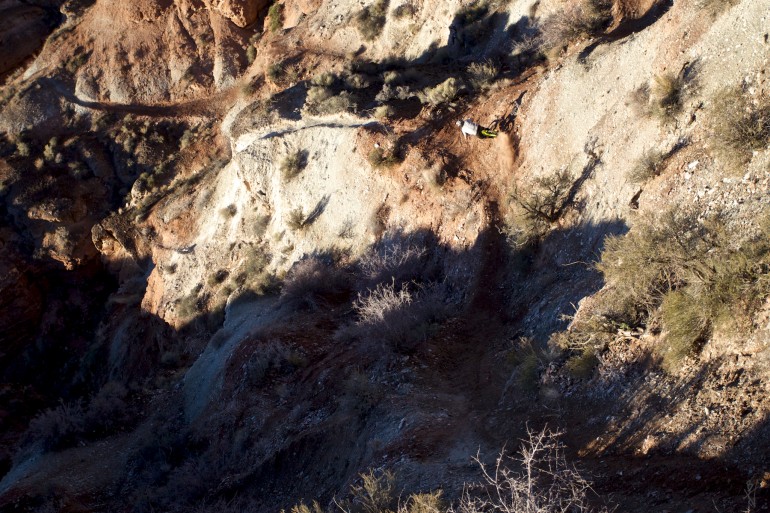 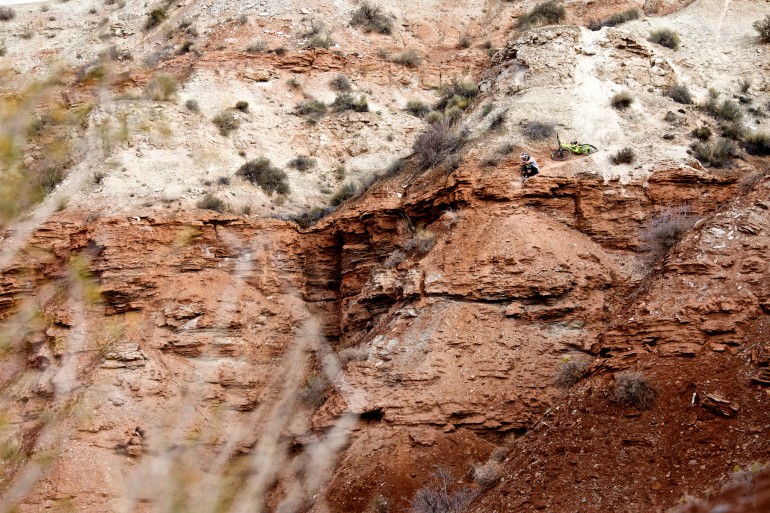 Goggles on, helmet buckled. With a deep grunt and a big exhale, Dustin was ready to reconquer. Once more he dropped into his line with speed, slashing the berm above his fall zone to setup his approach. Creeping over the edge, he let it loose, gaining momentum through each of the three drops before railing the bottom turn with power. 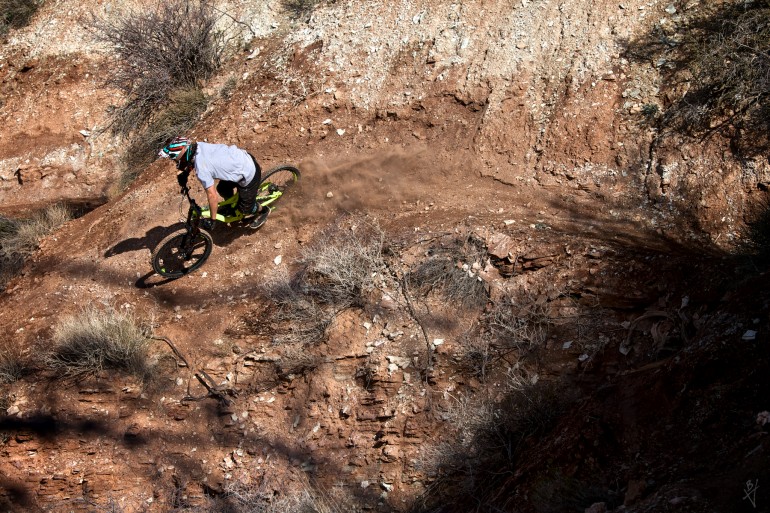 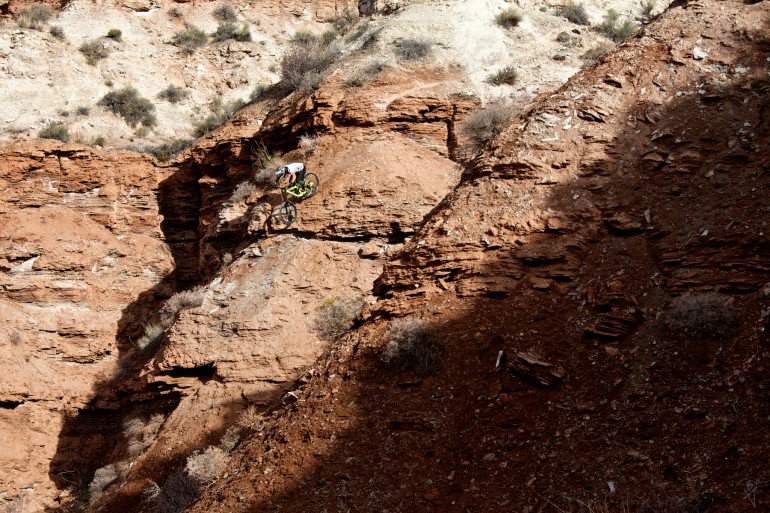 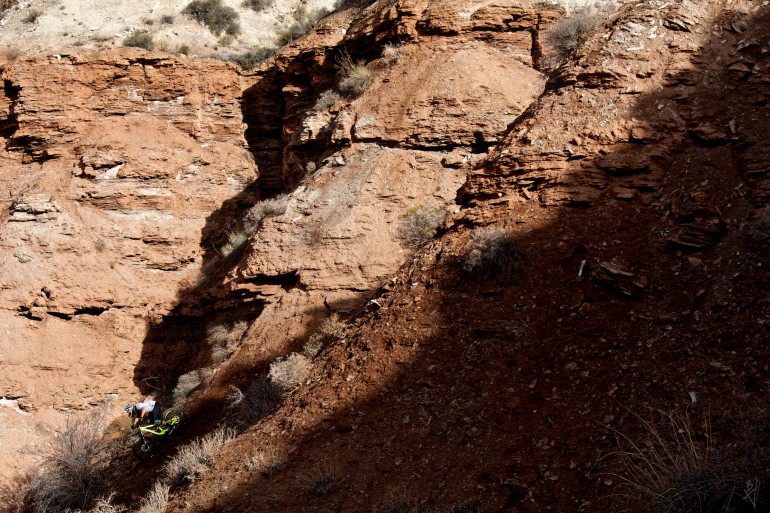 A huge weight had been lifted, and after a couple celebratory fist pumps, Dustin was ready to have some fun sessioning the rest of the venue. By the next day, storm clouds were visible to the north and we new our time in the desert was coming to an end for a few months. 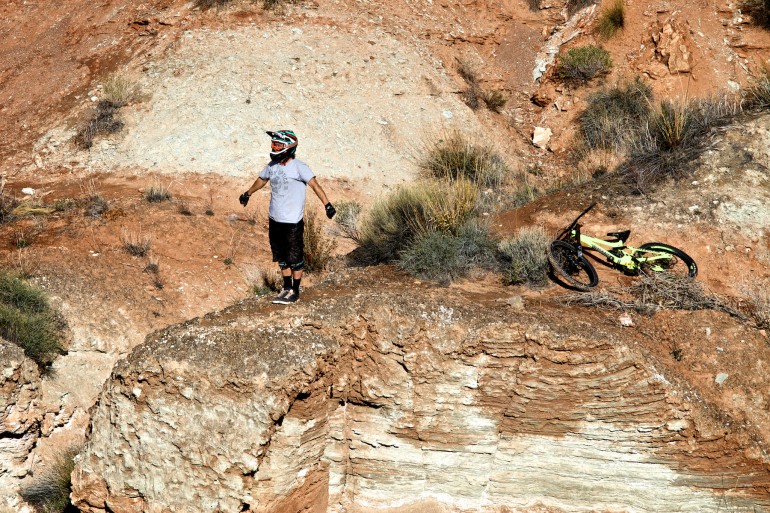 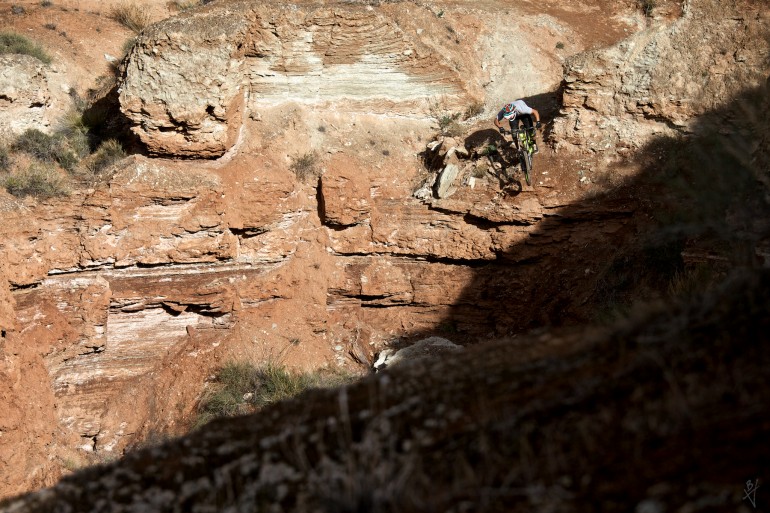 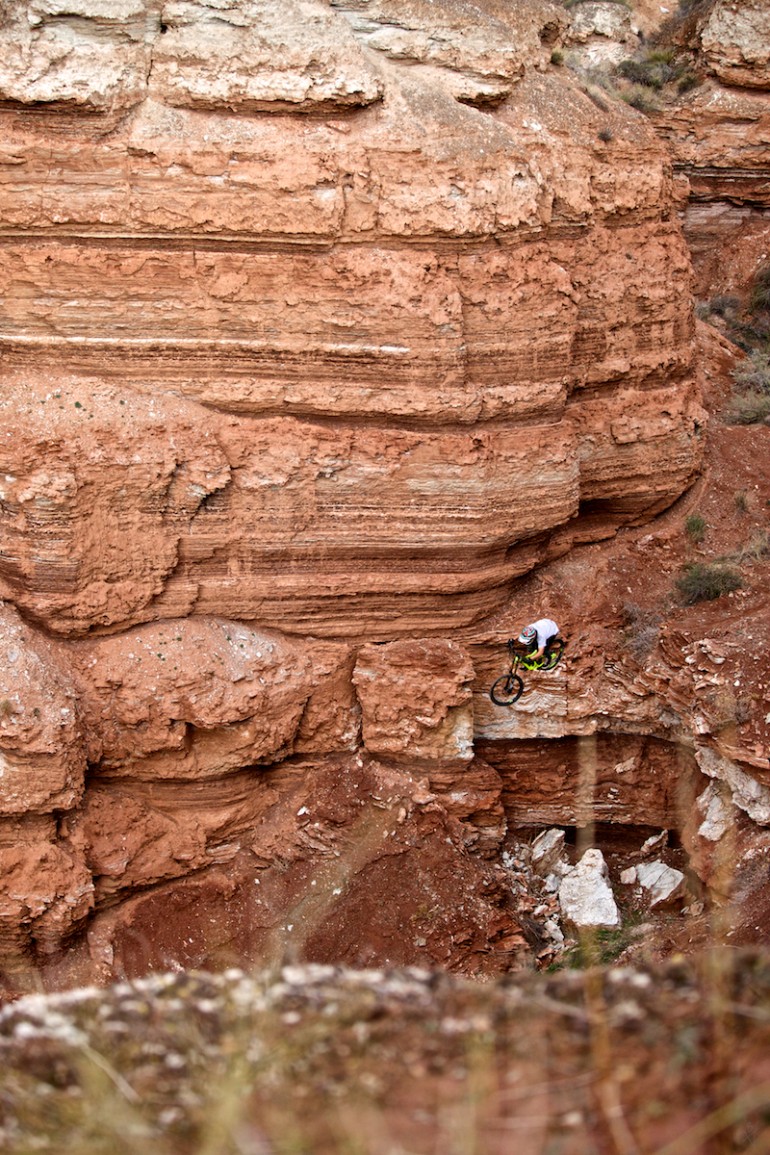 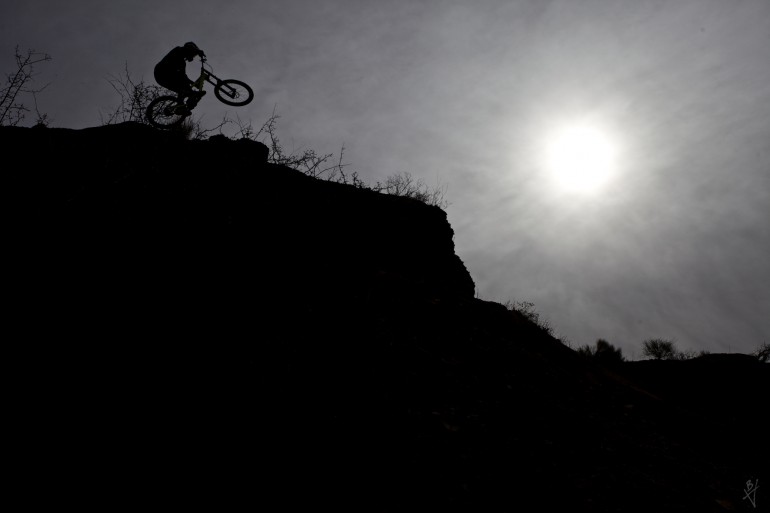 Dustin finished the trip by freeriding a line he had never done just outside the venue. By the time we got back to camp in the afternoon, the wind had picked up and a cold sprinkle began to fall. Winter was upon us, but too late to keep Dustin from redemption. 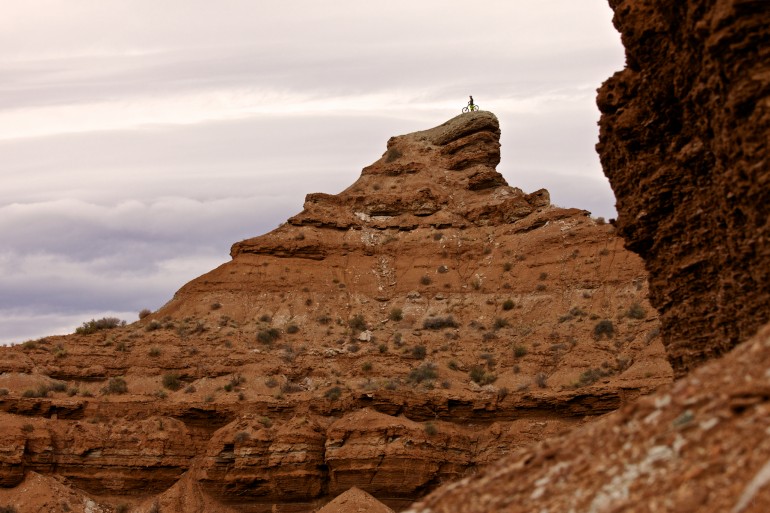 Witnessing his crash in qualifiers, I was blown away when Dustin walked out of the venue with merely a scratch on his body. Almost more impressive though was his immediate return to Virgin to reconvince himself of his ability. The goal of this conquest was to be able to move on. You have to confront and conquer, and Dustin did just that. He knew he needed to recover quickly and return to face a demon that would only get bigger with time. Now, the only thoughts on Dustin’s mind are about the next adventure, the next big thing. 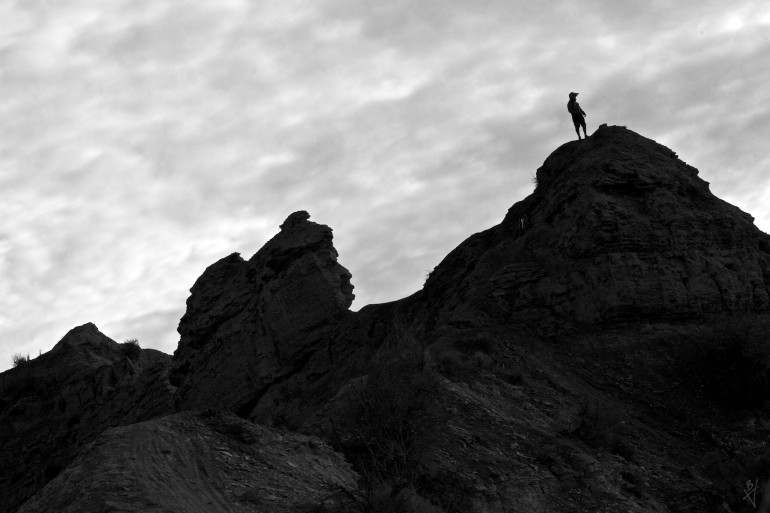