In February of 2014, Sasha Yakovleff decided to mix things up and leave the comforts of his New Hampshire hometown to make a cross-country move for a job opportunity in Salt Lake City, Utah. The decision wasn’t too hard since he knew Utah was a world-class biking destination and the new surroundings would offer plenty of choices to fuel his two-wheel addiction.

“You’re only young once, might as well travel around a bit and explore,” says Sasha. “Utah has opened my eyes and put things into perspective. I miss New Hampshire dearly and I’ll be back home permanently at some point, but until then I’m not sure where life will take me. However, I know I’ll be aboard a bike wherever I go.”

Moving your life can be tough. Making new friends and getting familiar with a new neighborhood can be a daunting experience and humbling to some, but Sasha sought to make it a quick process. His love for bikes and an incredible motivation to challenge himself have helped him settle into his new home and explore the limitless riding options waiting out the backdoor.

“Riding a bike is the ultimate sense of freedom for me. It doesn’t really matter where I am or what mood I’m in, riding always makes me happy and I have to thank my sponsors for helping me with that – Scott Bikes, Deity Components, Kenda Tires, Mavic, G-Form, Bern Unlimited, TRP Brakes, Five Ten, Darn Tough Vermont. My motivation though is pretty simple – keep myself challenged physically and mentally. There is always something new to learn or ride, whether at the dirt jumps or way out in the woods on some remote mountainside.” – Sasha

The constant desire for something new is a driving force behind Sasha’s creativity. He’s a nine-to-fiver who doesn’t understand the term “weekend warrior.” Everyday provides if you’re motivated to take advantage, and the Wasatch is a big backyard with more to offer than most seek to realize. The abundance of pleasures is almost overwhelming, and even after a good soak, you can easily be satisfied with just the tip.

“When I moved to Utah, my first thought was damn this place is dry, I hope we get a ton of rain. New Hampshire has variable weather which you learn to love, but Utah is much more sunny and dry. When it rains here I get really stoked and head to the woods to build. The nice thing about the Wasatch is the variety. You can ride whatever you want. Dirt jumps down low, alpine riding up high, DH or all-mountain trails in between.” – Sasha

Over the past few seasons, I’ve had the opportunity to tag along with Sasha as he familiarized himself with his new backyard. Being on the bike or shoveling dirt seem to be the only two things he thinks about, and soon I started to expect a call or text from him every couple of days to go shoot a new feature he had been secretly building over the weekend or scout something he spotted from the road on his drive to work that looked fun to ride. We got together at the end of this season to recount a few of the fun adventures and build projects we had photographed together. 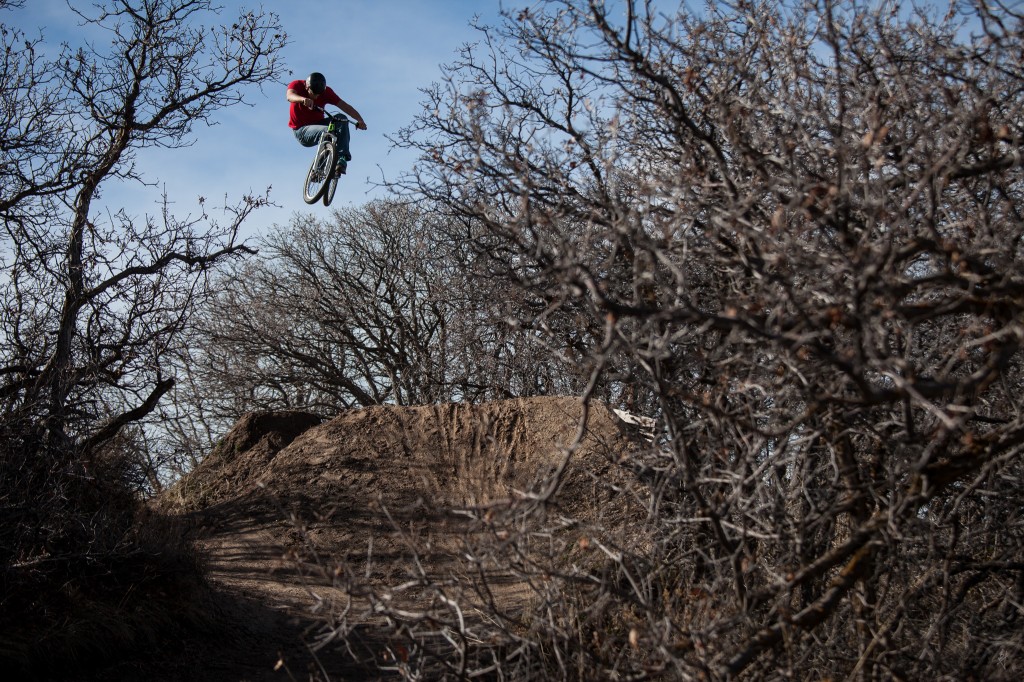 “This was shot early in the morning in March. I Street is a winter staple in Salt Lake City as it is usually rideable year-round. In fact, the dirt there is much better in the winter when it’s actually wet and malleable. The funny thing about I Street is that things are always changing. Lots of people build there, so the place has tons of personality. I don’t know who built this jump but it’s awesome; you can just pull for days.” – Sasha

There had been a couple wildfires this past summer just outside of Park City. Sasha and I scouted this area after he spotted the burn zone on a cross-country ride and thought the ashy dirt would make for some good turns. Besides being covered in soot when we got back to the car, it was a fun new experience for both of us. 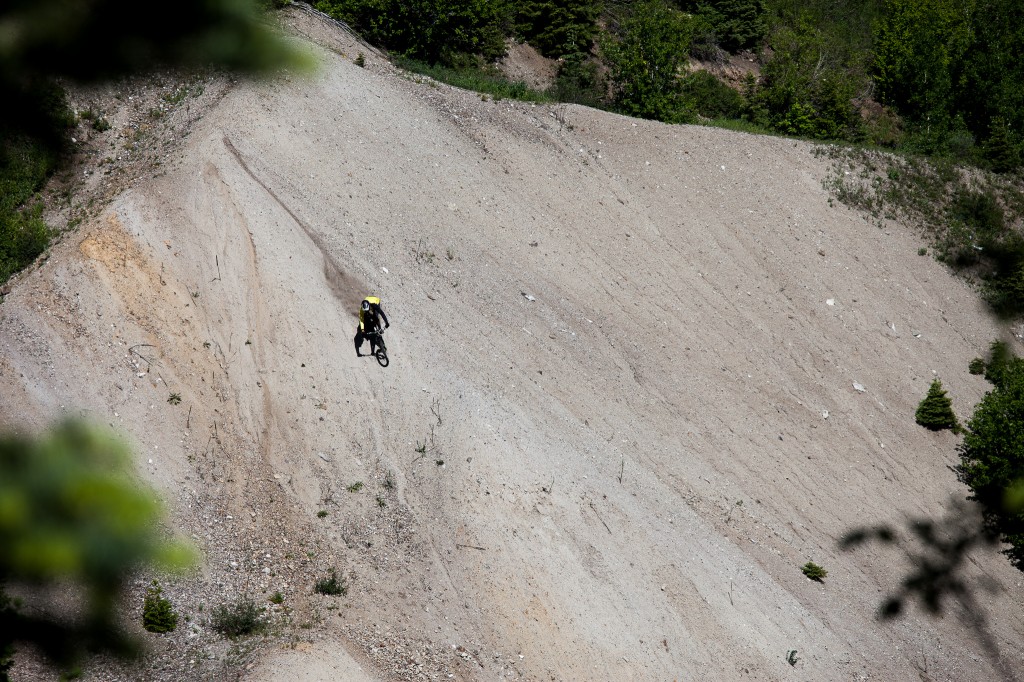 “I had driven by this spot a million times, or taken the bus up past it with my DH bike to go ride other trails. I thought about riding it before but was too lazy and forgetful to check it out until it rained one time this past spring. The dirt was perfect and it was really fun to ride. There are a few sections of different pitches where you can alternate your speed and push out a brown pow turn or two. Plus, first descents are hard to beat.” – Sasha 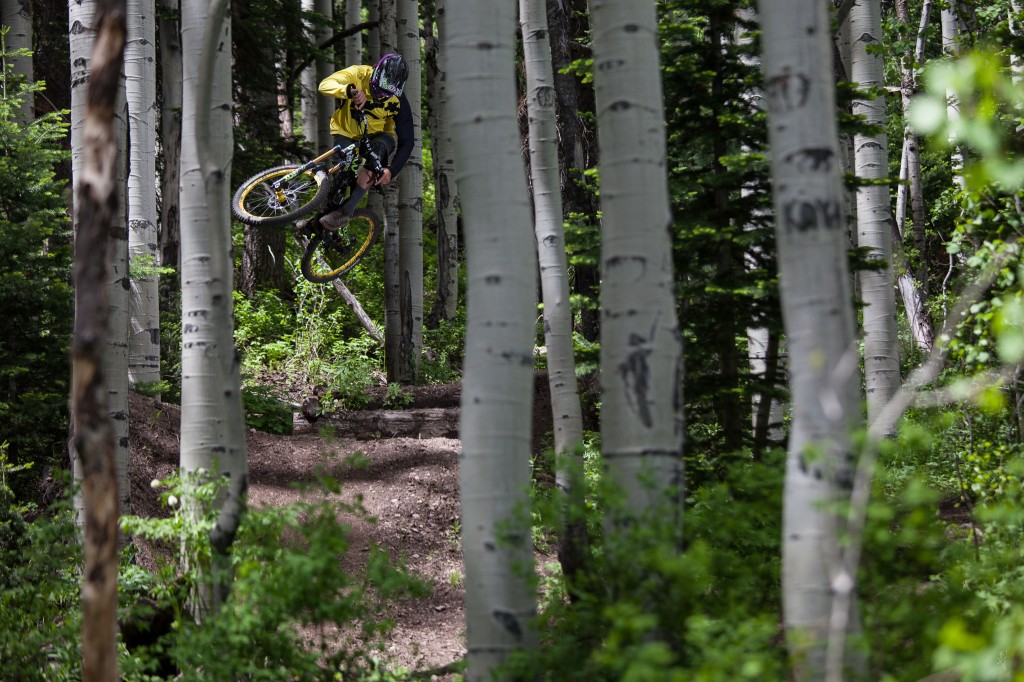 “Evil Empire is a Park City classic DH freeride trail that never gets old. It starts at Jupiter Peak and descends over 2200’ vertical feet back into Old Town Park City via Daly Canyon. This jump is rad and on one of my favorite sections of the trail near the bottom in the Black Forest of Empire Canyon. The pines thin out a bit as you jump through aspens before dipping back into the darkness.” – Sasha 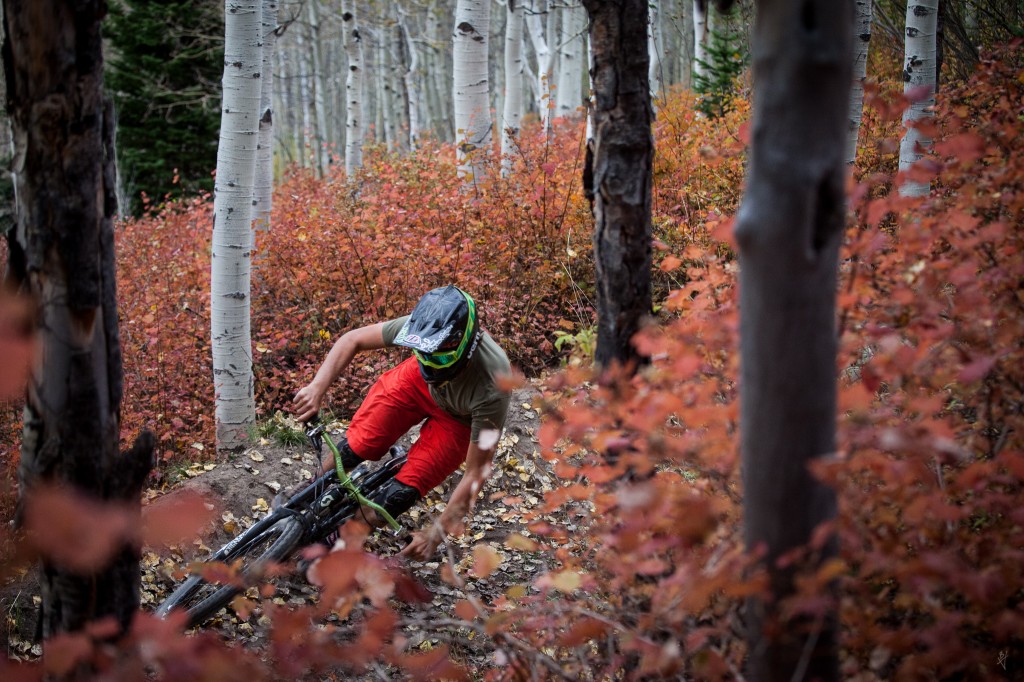 “Raspberry Lane is one of my favorite pirate trails and sits just above the top of Old Town in Park City. We were actually scouting out another shot on an overcast day and noticed the fall colors in this berm. Funny how things work out when you’re looking for something else – always keep your eyes open I guess.” – Sasha

I think Sasha’s least favorite time of the year is after Daylight Savings when it gets dark super quick in the afternoon. For someone who works all day but lives to shred, it’s frustrating to only have an hour or so to ride after work in the later part of the fall. Luckily the Park City Dirt Jumps are easy to get to and the street lamps at the fire station next door help illuminate the open field of jumps for a few laps before dinner.

The Oakley Skatepark is located right next to one of the biggest rodeo venues in Utah. The town population is about 1,000, but the new $3 million rodeo arena seats 6,000. It can be windy a lot of times, but if you wait it out, the Kamas Valley sunsets are usually incredible. 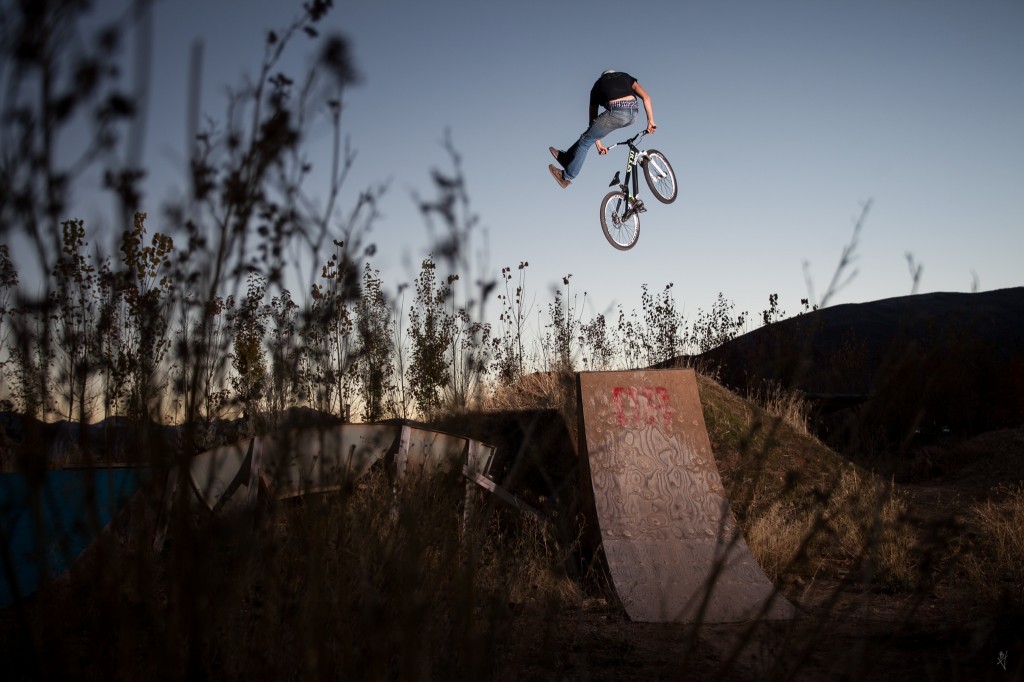 Eric Porter has one of the sickest backyard setups, stacked with stunt ramps, a pump track and a water slide snake run connected to another pump track in the neighbor’s yard. Fall BBQ sessions at Porter’s are some of the funnest days during late season. 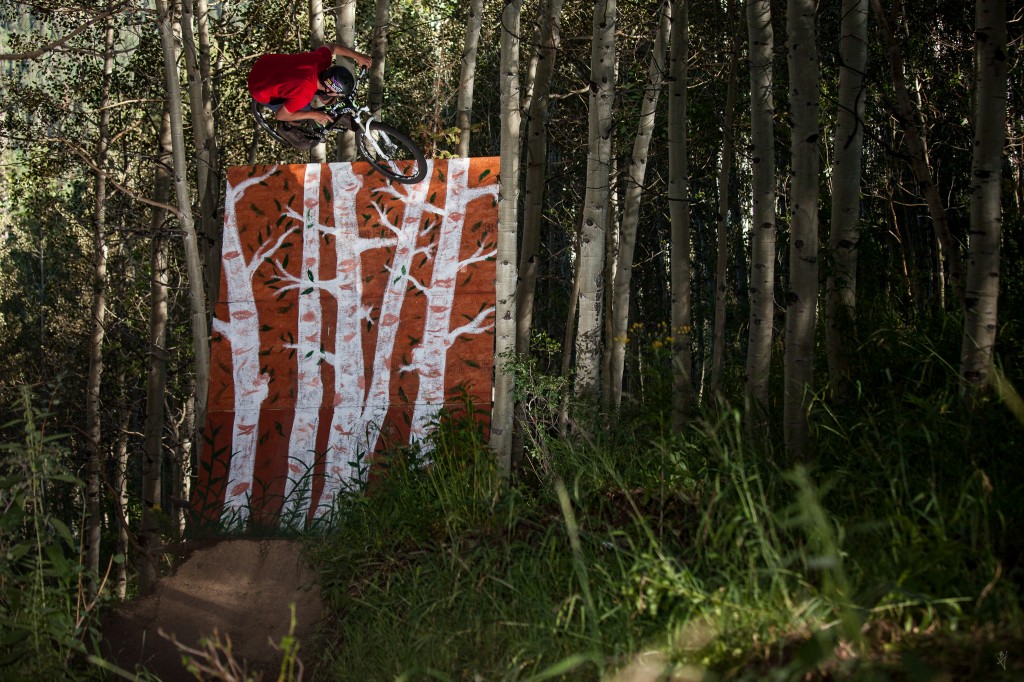 “After moving to Utah, it took me about a year to scout out a few spots I wanted to build and learn my way around the place a bit. I knew I wanted to build a large wallride in the middle of the woods, and what better place to put it than in an Aspen grove? This thing is tucked up on a hillside in Park City. We built it, painted it and sessioned it a few times before the snow started to fall. The aspen leaves died early this year due to a fungus, so hopefully we can catch a golden frame next autumn when the grove goes off.” – Sasha

Adventures in any backyard can be endless if you use your creativity. Even when it seems like there’s nothing new left to discover, building and riding have endless possibilities. When you’re passionate about riding your bike and always looking for something new to shred, you’ll find a way to satisfy your cravings but also stay thirsty for more. He might be settled into his new home now, but Sasha’s quest for new fun outside his doorstep will never stop regardless of how long he stays anywhere.