Splitboard mountaineering tours have certain elements that rank them on the totem pole o’ touring. The very best tours include: Aesthetic quality, difficulty, produce adrenaline, and the snow needs to be quality deep powder.  Climbing up and riding down Coalpit Headwall was always looming somewhere near the top of my hit list because it usually possesses all of these qualities.

Zach tells me that Him, Mark, Alecs, and Justin are getting up at 4:00 am to summit this incredible line called Coalpit Headwall. Being near the top of my hit list for years, it only took a split second to start packing my gear.   I got all my normal stuff together: Split board, skins, bindings, poles, transceiver, probe, shovel, food, water. Then I got my axe and crampons, it is a special moment when I get to take those off the shelf, because I know I’m in for an adventure day in the backcountry. 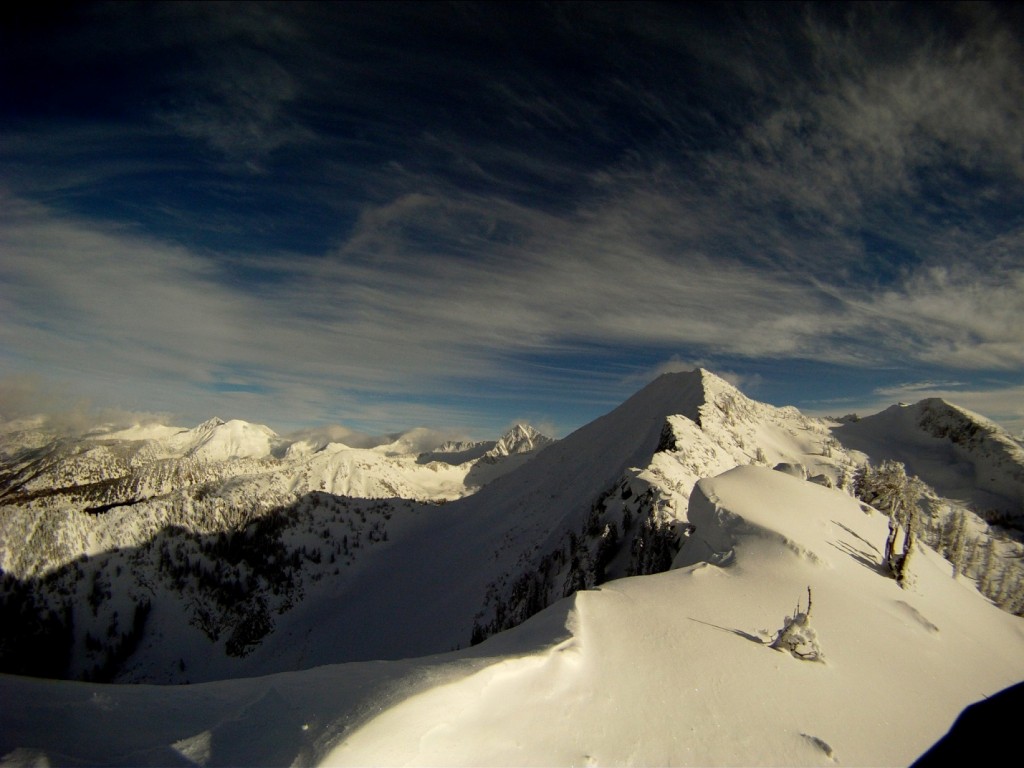 Coalpit is kind of an illusive powder island because it is a beautiful untouched headwall that is surrounded by difficult approaches. One of these approach options is by starting from White Pine. You climb up and over all the drainages: White Pine, Red Pine, May Bird and finally get to Hogum, but then you still have to go straight up the tube shaped chute that pierces through the vertical cliff band call the Hypodermic needle.

Another way is to do a Salt Lake Valley start from Bells Canyon, climb 5,000 ft up “pie in the sky”, traverse a high consequence ridge and then climb the western ridge to the summit of Coalpit. There are also numerous other ways, but our skimo partner Mark had something else in mind. Out of true Wasatch backcountry style we decided, why not just go straight up it! 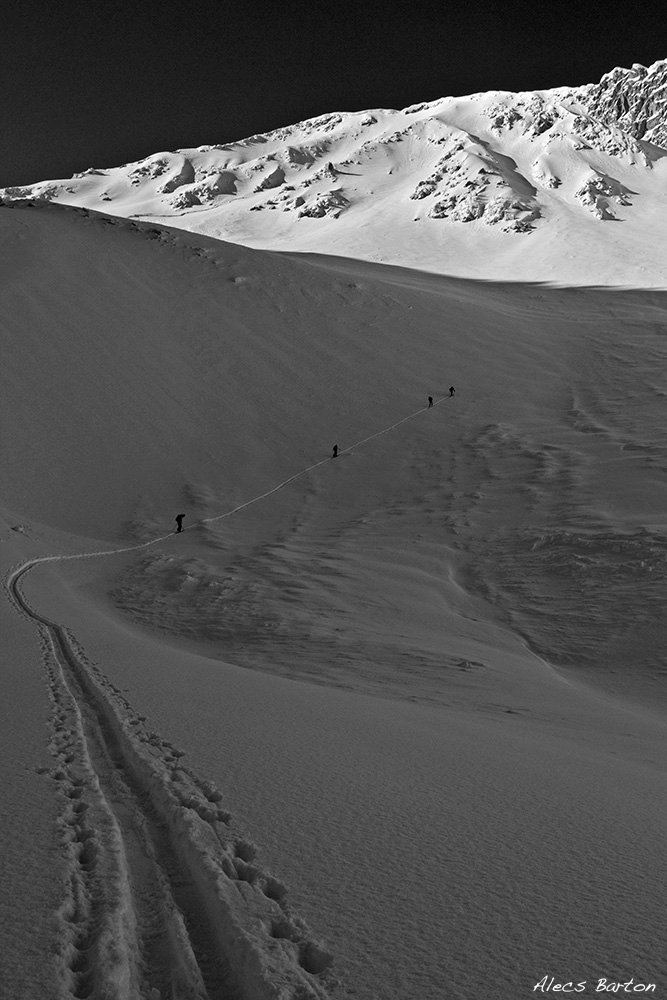 We started off the side of the Temple Quarry trail where the bridge had been washed out the previous spring by very high running melt off. Head lamps on; Justin and Alecs headed right for the crossing and we heard a fall in the river somewhere off in the darkness. Zach and I decided to look elsewhere; we found a down log covered in freshly fallen snow. The first thought was to try to walk it, but risk the chance of falling 5 feet to an icy river. After just recently being influenced by the Man vs. Wild episode we watched the night before Zach and I tried the old straddle and scoot method. This was particularly awkward because we had to hold our skis together and our poles all while trying to scoot across the slippery snow covered log. Finally we both made it and the first barrier to our powder island was put behind us. We skinned up what is a small stream in the winter and a major tributary to Little Cottonwood in the summer; shortly after we reached Coalpit’s waterfall. We were very relieved to see it was mostly frozen over and so we got out the crampons and ice axes and climbed up and around it. The exposure of the vertical climb felt good and got our, still sleeping, adrenaline pumping; it was a sweet way to start this beautiful day.

Coalpit drainage is a spectacular sight to see. You are completely engulfed in steepness and because that night had given us freshly fallen snow, it was steep freshies all around. Because of the 360 degree towering walls, we didn’t get any early morning sun until we were almost to the ridge that divides Hogum and Coalpit. As the sun crept over the ridge, I remember bolting for the sun line so I could get the warmth on my ice cold face. Once we all crossed over into the sun there was an unspoken sigh of relief from the cold dark wee morning hours. 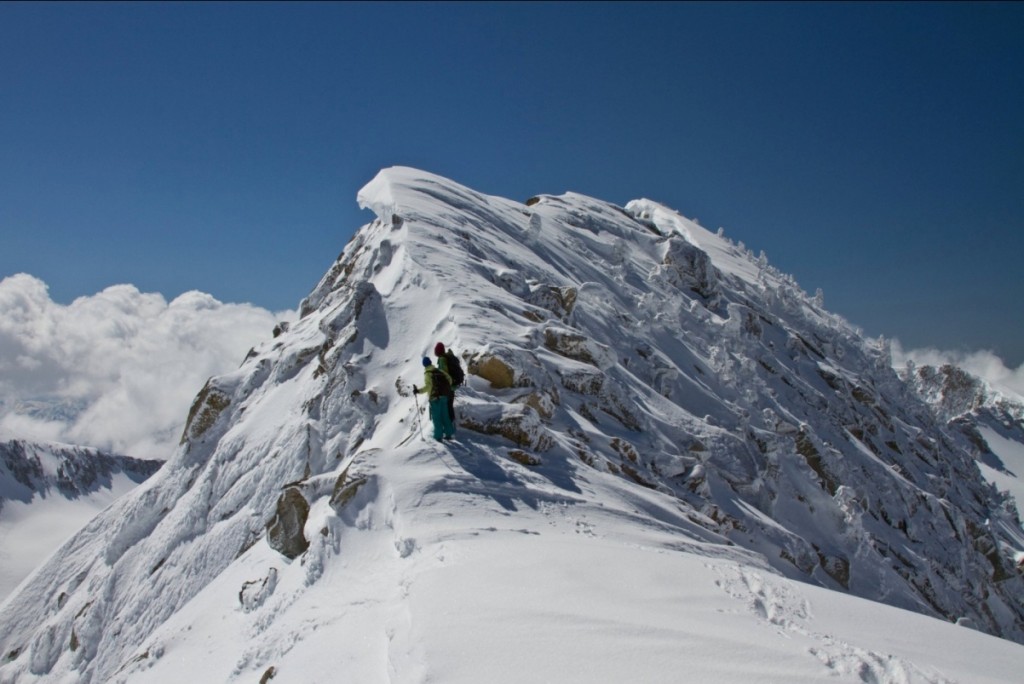 The ridge didn’t look like too much technical climbing when standing under it, but I noticed the precarious over-hanging cornices all the way up. I was glad to be there as early as we where that morning because it was April 27th and that late in the spring the snow has potential to heat up significantly. Along the way we skirted around the cornices that had the potential of being a platform of death, and gained more and more of the ridge.

Mark and Alecs were  ahead of me. Mark in his light skimo gear just seemed to glide up ridge without resistance. I decided I was going to keep up with Mark and that determination stuck with me. As I followed tight, steep, and small switchbacks to the summit, there was one kick-turn  that changed the way I experienced fear. It was the way that I let it effect me that made the experience happen, because I let the fear take over, and I slipped. 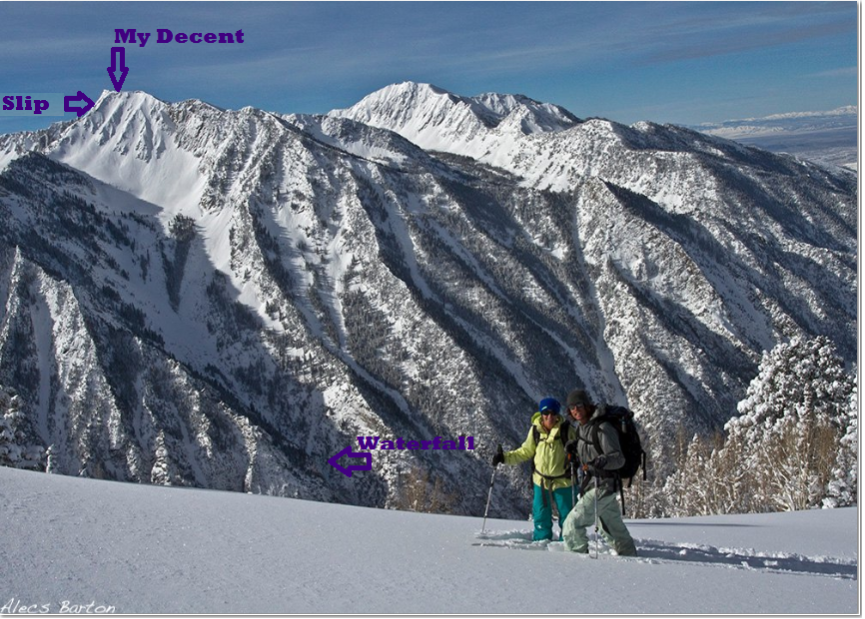 My knee thudded onto my ski and I scrambled frantically trying to drill my poles and fingers into the snow in an effort to keep my position on the ridge. If I fell forward, I would fall over a 200 foot cliff into the Hypodermic Needle and would not stop falling for 2000 ft, when I would arrive at the Hogum valley floor. If I fell backward, I would get thrown over a 50 ft cliff and get washed thousands of feet down to the bottom of the Coalpit drainage. And so I froze. It wasn’t like any type of freezing I had experienced before. I literally couldn’t move for about 10 seconds and it felt like 10 minutes. When I finally started to shake, I tried to get up. It took me two tries and after the first failed attempt, I drew all the focus and drive left in me and stood up. Just those 10 seconds of real fear changed my composition completely. I was shaken, sweating, and the butterflies that had overrun my stomach decided to stick around for awhile. The moments following where some of the best! I gained the summit, and euphoria kicked in. All those butter-flies came out of my stomach and went under my feet, I was floating!

After that huge range of feeling, I really felt alive and I still got to ride Coalpit Headwall as a reward. We split parties at the top, Mark and Justin where going for the Hypodermic Needle and Alecs, Zach and I were going for the headwall. We all had been spotting our lines from the bottom and where gunning for them. That is one of the nice things about going straight up your line, you then get to see it in it’s current state, only hours before slashing down it. 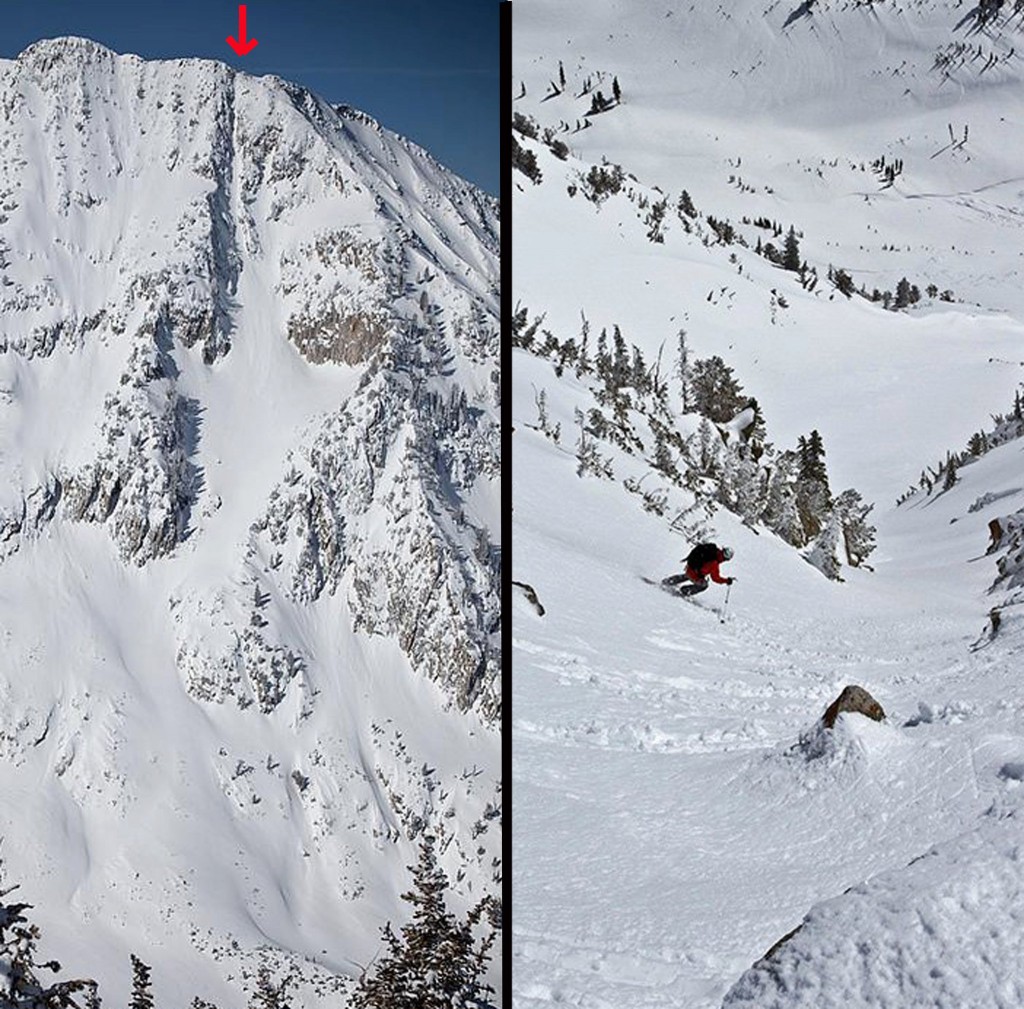 The line I had selected looked like an opening in the cornice, dead center on the ridge. As I strapped in and looked over I could see that it was really a small drop. Normally, I would have thought twice about dropping over a cornice into a 5,000 ft line, but today I felt good and wanted to do it. Zach spotted me and I dropped in. The landing from the 20 ft cornice quickly passed out from under me because I underestimated the steepness. I stomped into the perfectly fresh powder and triggered a sluff of the fresh snow that quickly spilt out from my board and strait down the fall line. I diverted to a higher island of safety and watched it flush. After that it was pure euphoria, making powder wiggles down all 5,000 feet of Coalpit! These experiences are what I live for and that is the reason I will continue to climb mountains, it is at the top of my lives to do list!

Wasatch native splitboarders Zach and Cindi Grant believe, "The couple that slays together stays together". This unique partnership has made exploring the vast and far reaching corners of our range thrive. Tired of resort riding this young couple looked beyond the boundaries, gained avalanche certifications, and sought adventure up and down the Wasatch. Now they ride together most every day in search of interesting destinations. Local split-board manufacturer, Voile has put them on their team of riders. They are passionate about preserving the solitude, beauty, and uniqueness of the Wasatch.
Website: http://agrantadventure.weebly.com/
Read More Posts By Cindi & Zach |
Follow: