In May, the Aletsch glacier in Switzerland turns into a highway of ski-touring fanatics on pilgrimage to the world-renowned Berner Oberland range to sample its delights. While I usually prefer the solitude of that lone far-flung line, this region of the Swiss Alps holds a piece of choice real estate in my heart: it was where my dad first taught me to walk on crampons and stage a crevasse rescue. It is also home to my favorite mountain, the imperious and magnetic Eiger. The aesthetics of the region are distractingly beautiful and local appreciation for the mountain lifestyle runs deep. After chatting to my dad about his guiding in the Alps, we decided to put together a trip to the region. In May of last year, my parents and I landed on the continent with wide eyes and great anticipation. (Before you roll your eyes at the inclusion of my parents-let me just say, my dad has climbed more 8,000 meter peaks than you and my mom has the first female ski descent of Mt. Timpanogos. They are consummate badasses and remain my first choices for partners.) We started our adventure at Interlaken and shared the first train to Jungfraujoch with an odd combination of desperately excited Japanese tourists and stern-faced Swiss mountaineers. After reaching Jungfraujoch, we quickly distanced ourselves from the umbrella-waving tour guides and their respective flocks of Nikon-wielding ducklings and bombed down the Jungfrau glacier to the start of the first climb of the trip up the Louwitor Pass to Kranzbergfirn. While the climb wasn’t particularly long (only around 2,000ft), we had arrived in Europe only the day before and I felt sucker punched by jet lag. Fortunately it was just so damn beautiful, my psyche outweighed my fatigue and we attained the summit in good time before descending down to the Grosser Aletschfirn glacier and continuing to Hollandiahütte where we would spend the night. 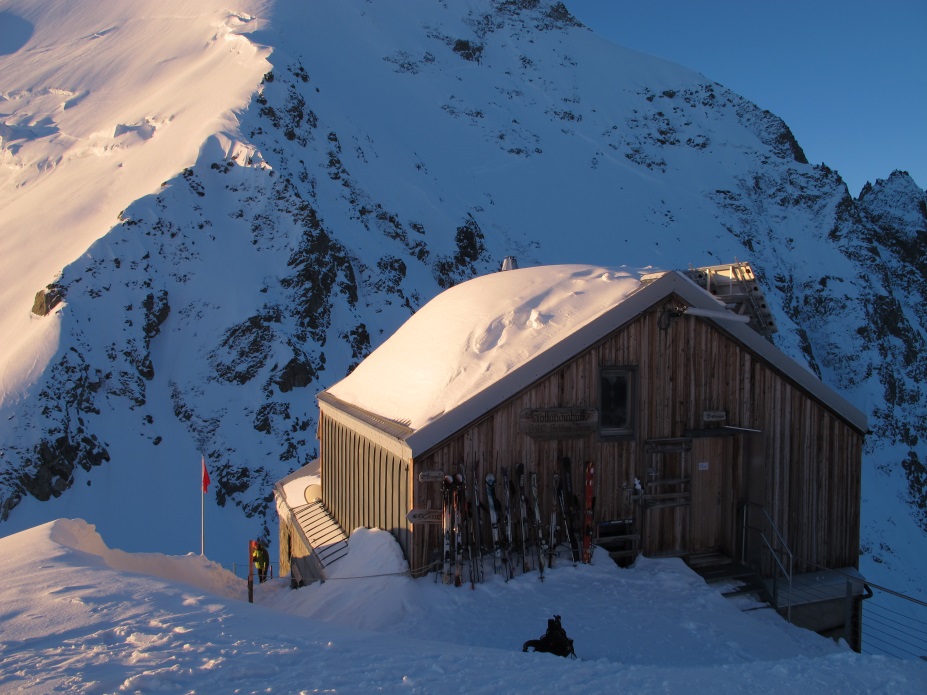 The Hollandiahütte, like most of the huts in the area, sits perched high along the shoulder of the glacier and offers access to the infrequently attempted Äbeni Flue. Although the region gets heavy traffic in the spring, several smaller huts located below less famous (but often more technical) objectives are scattered throughout the region and even in the busiest season remain close to empty. Later in the day after an attempt of Äbeni Flue, we descended down to Konkordiaplatz, essentially the Times Square of the Aletschglacier. From there, we climbed the 500+ stairs to Konkordiahutte, the most centrally located and populated hut on the Berner Oberland circuit. 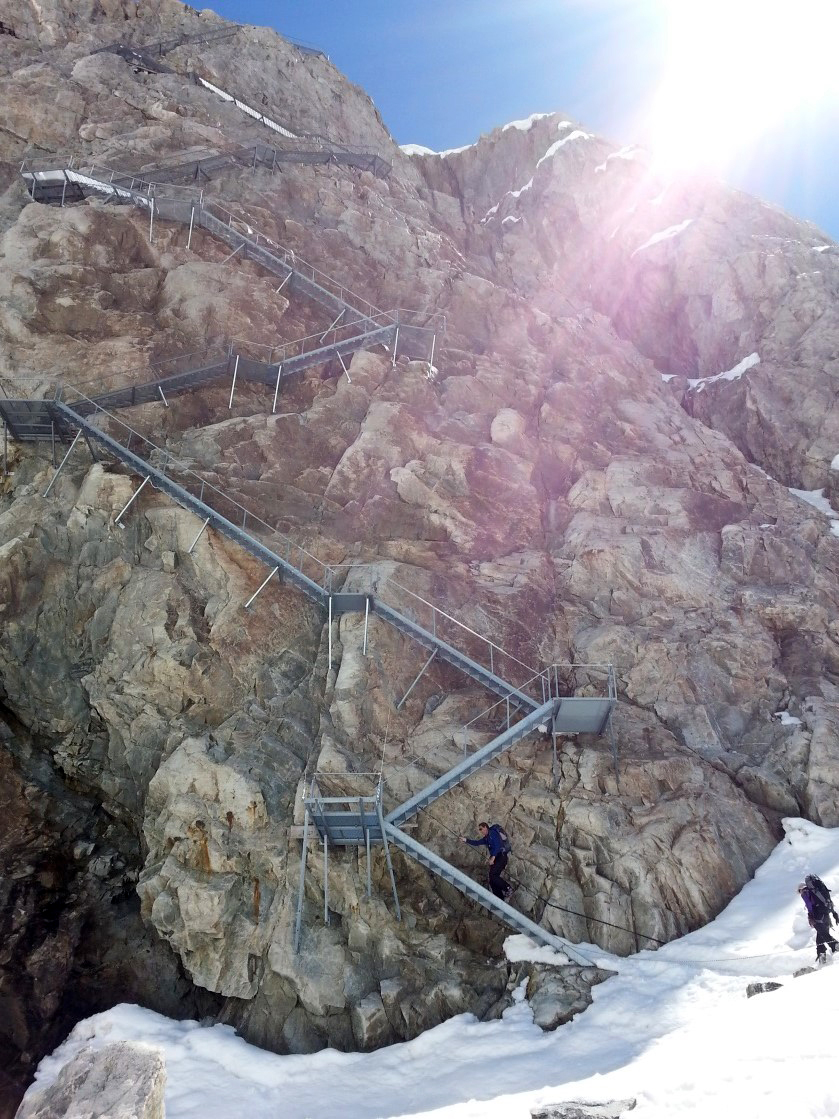 Dad and Mom mounting the many, many stairs to Konkordiahütte – due to the alarming acceleration of climate change and resulting glacial melt, more stairs are added each year

The hut system defines ski-mountaineering and touring in the Alps, and we quickly settled into the routine of awaking at 4am in the morning to chase down a summit and returning back by 2pm to avoid springtime avalanches and enjoy spätzle, good beer, and conversation. Switzerland’s national identity is strongly rooted in its mountain culture and climbers and mountain guides receive far greater respect than in North America and its well-maintained hut system stands as a testament to the importance attached to climbing and skiing. Throughout our trip, I was struck by the many mountains along our path which played central roles in the evolution of climbing. Of course there’s the Eiger, whose North Face was the last unclimbed problem in the Alps until, after tremendous loss of life, two climbing teams partnered half way up the wall and summited in 1938. There’s the Finsteraarhorn with its jagged summit, which almost cost famed explorer Gertrude Bell her life, and the technically challenging “Fiesches” and “horns”. Even the most energetic ski-mountaineer could be satisfied for months here, and while the huts are venues for rowdy social gatherings, the number of tempting offerings in the immediate area ensures a degree of privacy when climbing and skiing. Our afternoon and evening spent at Konkordiahutte turned into a bit of a community night when different teams from different countries (but all with similar degrees of sweat-stench) began taking swigs from steins and swapping stories of battles waged and won in the mountains. Considering the extent of this playground, it is no surprise that the majority of skiers and climbers frequenting these huts tend to be like…really good. It was inspiring to hear about first ascents and descents in burly ranges in Iran, Bolivia, Norway, and Kyrgyzstan. After a particularly friendly evening (in this case friendly is quantified by the number of beers purchased that evening—which was a lot), breakfast was subdued but we managed an early start and headed towards the Grossgrünhorn via the Grünhornlücke. After obtaining our primary goal for the day, we still felt strong and decided to summit the Wyssnollen as well, a neat peak with excellent views of the entire Oberland massif, before descending to Fisteraarhornhütte. Finsteraarhorn has to be one of the coolest looking mountains anywhere and I was psyched to make an attempt. In fact, I had selected the itinerary based on this long-held, most-beloved of mountain-based dreams. In addition to being a beautiful summit, the steepest portion of the southwest ridge features two incredibly steep and consequential couloirs—in short, my favorite type of line. Alas, our two-day summit window coincided with a bout of terrible weather and I was denied my dream but given a reason to return. 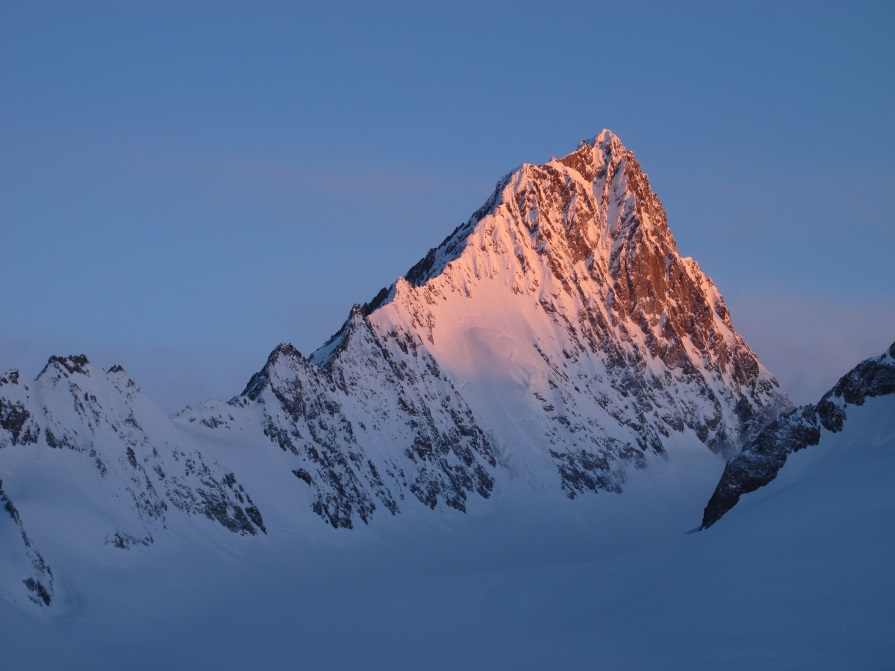 The Finsteraarhorn at Dawn – Photo by Mark Houston

After two days of snow and wind, we navigated our way down the Finsteraar glacier under the stars, skiing in silence to better enjoy the splendor of the experience. At the juncture of the Fieschergletscher, we put on our skins and began the long ascent up the Gross Wannenhorn.

On our way to the summit Grosses Wannenhorn

The conditions were perfect and we rose gradually with the sun, obtaining the summit after an arduous morning of effort and were rewarded with an unobstructed view of the Matterhorn and the entire Mont Blanc massif. While there was nary a puff of condensation in the sky, a curtain of clouds covered the valleys, leaving only the faces of noble and noteworthy peaks beckoning us to come and play. While it was tempting to linger on the summit, we had a long descent that involved delicate route-finding through networks of skier-eating crevasses followed by another prolonged climb to Oberaarjochhütte. Finally, after 6,000 feet of climbing, we were welcomed by the tiny, inconspicuous hut.

To the far left, the Grosses Wannenhorn looks down upon roads of ski tracks-photo taken from the sunny porch of the Finsteraarhornhütte

The following day, feeling tired and abused after three straight weeks on skins (having been in BC ski-mountaineering in the Purcells immediately before this), we crept down the glacier and put on ski crampons to mount a steep ice fall en route to the day’s objective, Vorderes Galmnihorn. The kick turns were hairy and the previous night’s hard freeze combined with an intimidating slope angle made for an unforgiving ascent that required all of my insubstantial attention. After a long few hours of focused climbing, we stood on top of the summit. The view was postcard quality but we were soon frozen by a bone-chilling fog and forced to retreat off the wind-shorn peak. 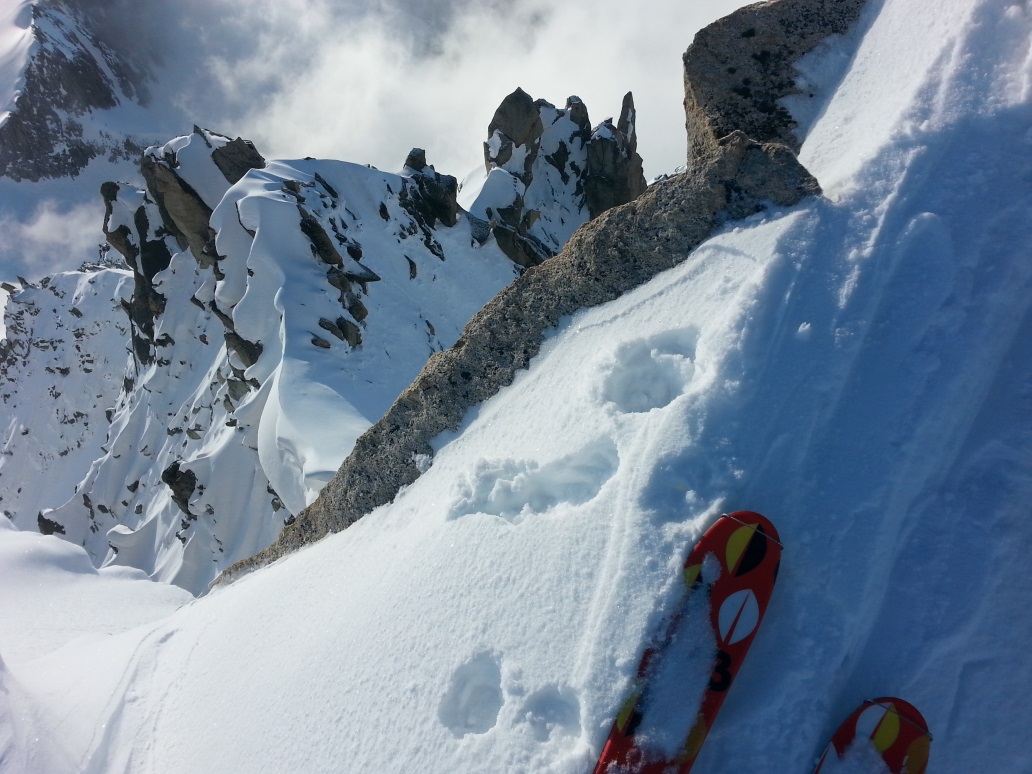 Scoping our line of descent from the summit of Vorderes Galmnihorn

The descent to the valley was close to 7,000 feet of petrified cardboard-like ice and our skis rattled down the couloir until we slowed to negotiate a crossing of the centrally located runnel which required an aggressive series of hop turns and rock bridge balancing. After a spicy bit of route finding, we exited via a Swiss cow path and made our way down to the charming little train station where we would leave and return to our everyday lives. 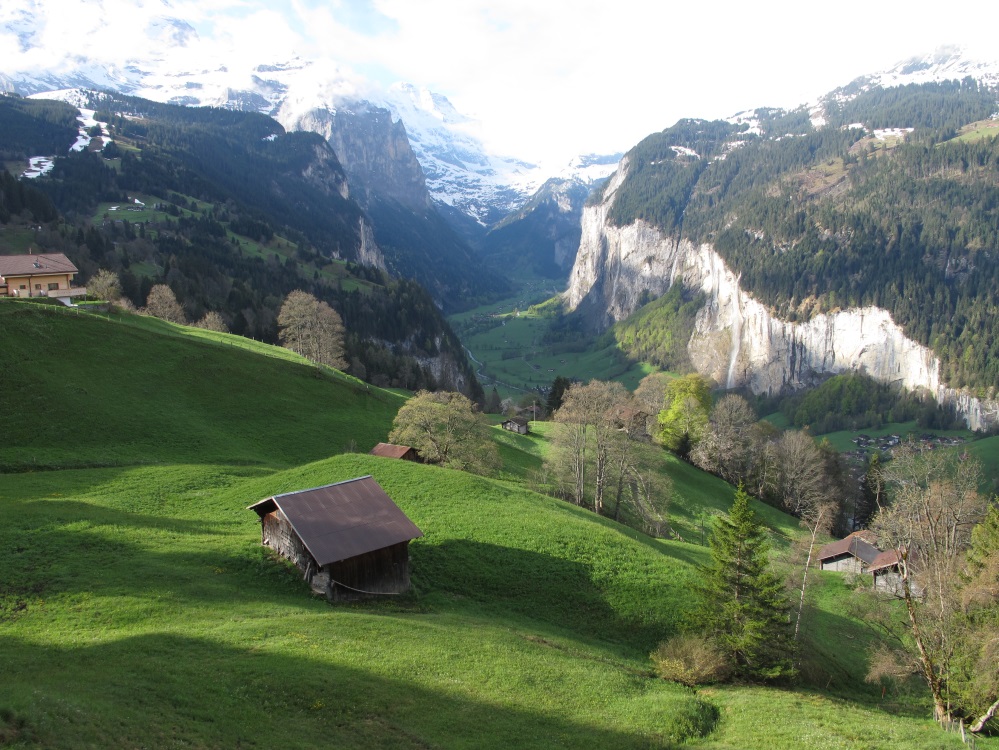 Maps for reference below: 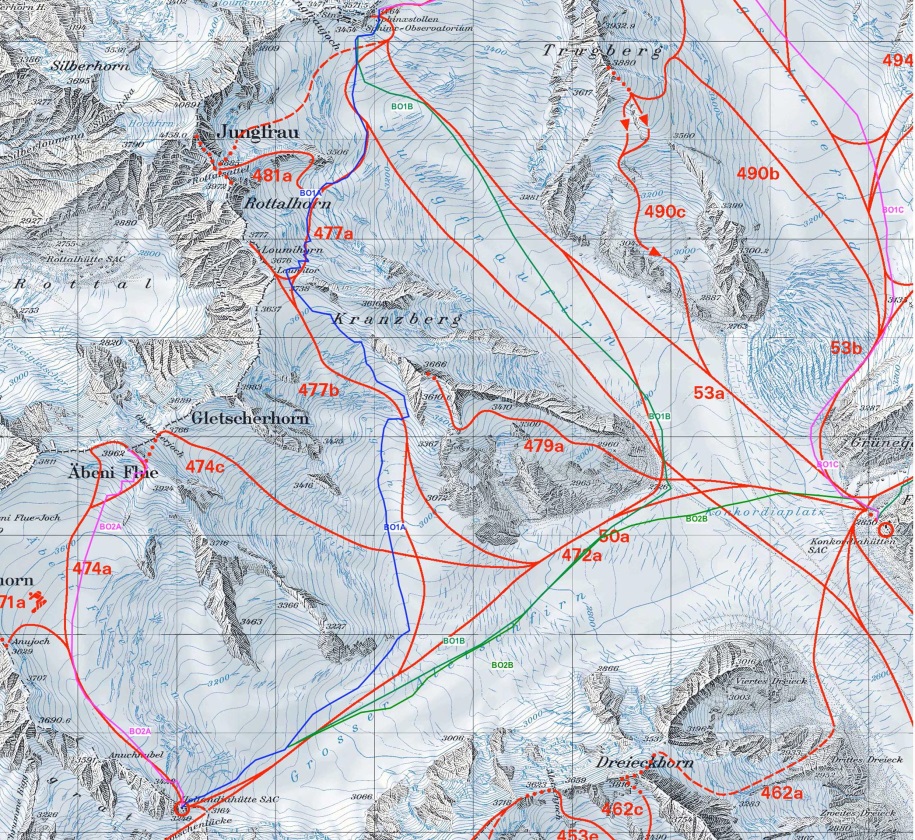 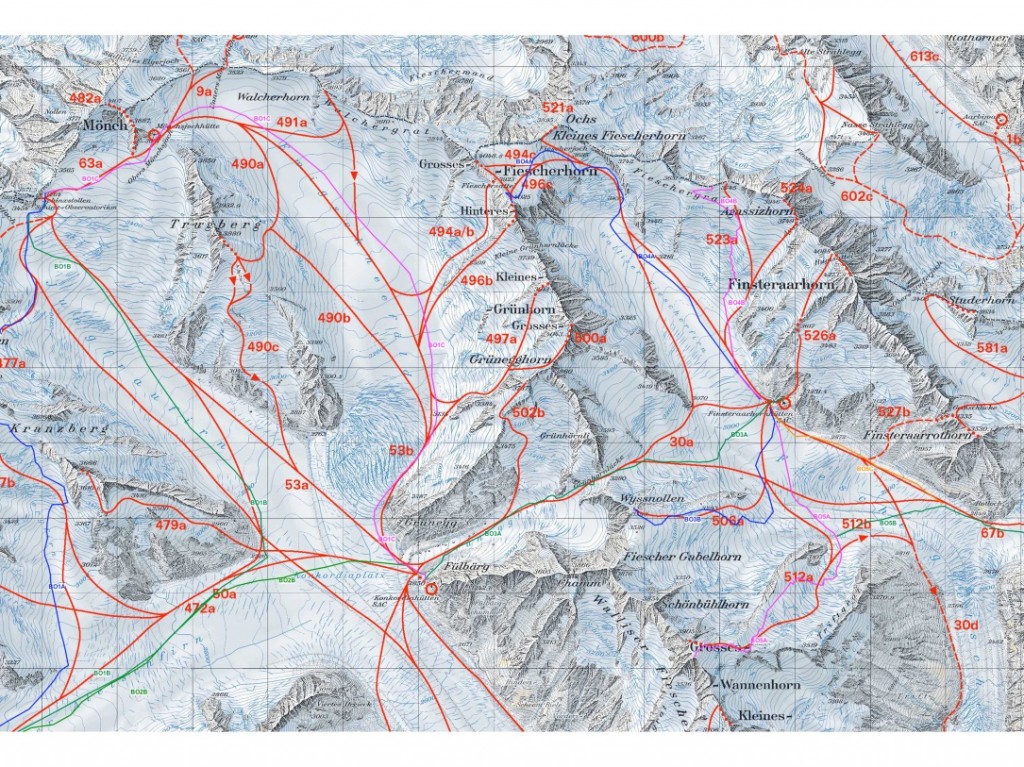 I am a native of Park City, UT and embrace all things vertical. I identify primarily as a ski bum with a penchant for claustrophobia inducing couloirs with spicy approaches but have a soft spot for any activity that requires a harness whether rock, ice, or mixed. When I am not in the mountains, I am writing about being in the mountains. Onwards and Upwards. Get after it!
Read More Posts By Annie |
Follow:

7 thoughts on “Ski-Mountaineering in Switzerland”