Overcoming Injuries – My First Trip on a Snowbird Patrol Sled

Back in 2008, I had the scariest ski crash of my life. I wrote down my thoughts back then, just a few days after that accident. I recently dug them up to share here:

Last Wednesday was just another epic April powder day at the Snowbird, until I crushed a tree at 30+mph. Before that moment I was stoked because it had been dumping, and over the last four days I had skied some lines that I’ve been looking at the entire year. I had also just quit my job earlier that week and had bought a spring Bird pass to put to use my new-found abundance of free time. 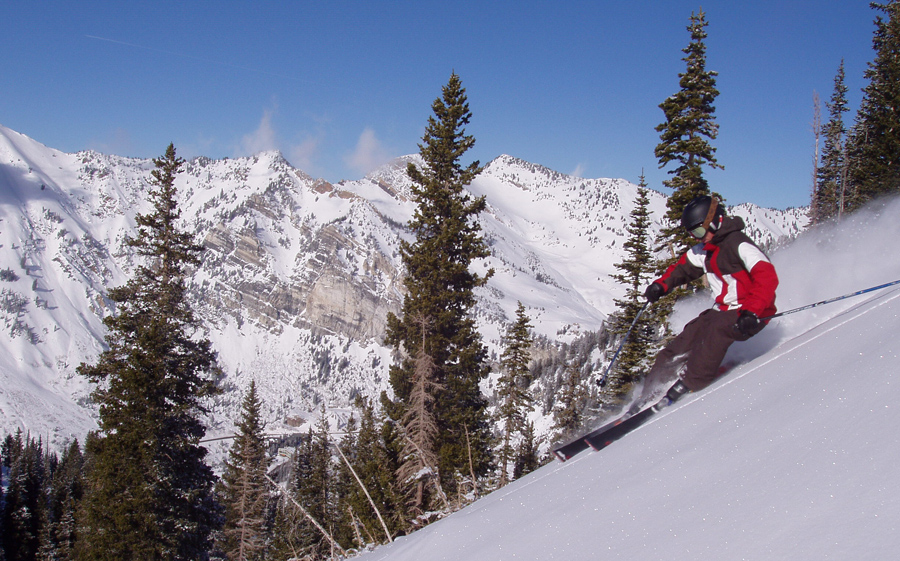 This shot was from earlier in the season, on a typical bluebird pow day at the Bird.

On the last run of my season, I got off the tram with my friends Stephen and Tom. We headed out on the Cirque Traverse to pick our way down a line in the Gad Chutes in the Shot 7 area. The line we chose was steep and exposed, with a small mandatory air at the bottom. I let Stephen and Tom go ahead of me and hung back to make sure they made it down okay. After they were clear, I skied the chute and landed the air with quite a bit of speed.

I started making some big turns through some chopped pow below the chute. There was a group of smaller trees to my left with some untouched powder that needed to be slashed, and I decided to make a turn at high speed right next to those trees. Halfway through a big, sweeping right turn, I caught something under the snow with my tips and instantly shot into the air. My legs were out to my left, and my body was pretty much horizontal at this point. Much to my dismay, there was a lone pine tree in my flight path, and I could do nothing about it. I took the trunk of the tree squarely to the chest, and since I was horizontal, the impact was distributed across my entire sternum. I instantly lost both gloves, poles, goggles, and one ski. Patrol later told me one of my poles was stuck about 15 feet up in the next tree.

The impact was huge and I instantly felt the worst pain of my life. It felt like there was a dump truck full of lead pipes parked on my chest. I couldn’t catch my breath and I was making some horrible noises. I was conscious for about 10 seconds, crawling on my hands and knees, and all I remember was thinking how I sounded like the grape lady that fell off the stage in the infamous youtube video. Then it all went black.

I had a very long, strange dream, and I remember feeling warm and thinking I was in my bed at home. Then I woke up. I was face down in the snow, bleeding, ears ringing, and my arms were jammed into the snow without my gloves. Needless to say, I was freezing and in tons of pain. It was dumping huge flakes at this point, and I was pretty well covered by the falling snow. I stood up slowly, thinking how strange it was that my body just decided to wake itself up. My phone was in my chest pocket at the time of the crash, but the impact had separated the battery from the case. I put the battery back in, and miraculously the phone came to life. I called Tom, but I couldn’t really breathe at this point, and talking was even more of a chore. Tom heard some gasping and figured it out, then he dialed patrol. Tom and Stephen had been skiing just to my right and ahead of me when I hit the tree, but they didn’t see any of it. They had already been on the tram deck for a few minutes waiting for me when I called. That means I was probably unconscious anywhere from 5-7 minutes; we’re not really sure.

Snowbird ski patrol called my phone a few seconds later, and they kept me on the line so I could guide other patrollers to my location. They found me in less than 2 minutes, and I was in the trees in a huge area with no real points of reference. Big props to Snowbird patrol on that one. I was in pretty bad shape, so they strapped me to a board, put a neck brace on me, and got the oxygen flowing. Everything was moving pretty fast at this point, and I was fighting to not puke or black out. The sled ride down 1,600 vertical feet of mountain from the top of Gadzoom was not the most pleasant. Every bump sent waves of pain through my body. Patrol did their best to make the ride smooth though.

Once I was in the clinic below the Tram deck, the medical staff took over and did a great job. I had an irregular heart beat, so they did an EKG and took some x-rays immediately. I had a few obvious broken ribs on my left side, but they were concerned about internal bleeding and damage to my heart because the impact was so hard. They tried to get a life-flight helicopter to pick me up, but the weather was too bad to fly, so they called an ambulance to take me to the ER in Salt Lake. The morphine started to flow and things got much better at this point. I started talking a lot, almost uncontrollably, and I was having a strange out of body experience as we drove down Little Cottonwood Canyon. It was as if I was flying above the ambulance, watching us drive down to the valley.

Once I was down the canyon and in the ER at the University of Utah, I had another EKG, a couple ultra-sound tests to check my heart and organs, and tons of x-rays. Everyone kept saying how lucky I was, and the final verdict was a couple broken ribs, massive cartilage damage throughout my rib cage, and a bruised heart. They were also concerned because I had blacked out so long, from a combination of extreme pain and a lack of breathing. My girlfriend (now wife) Casey showed up at the hospital before I even got there, and she was great throughout the entire ordeal. After the doctors were done, I tried to sit up, but immediately blacked out again from the pain. I stayed in the hospital for a while longer, but they let me go home later that evening.

This is the 4th day since the crash and I have had some time to reflect on all of this. I guess it could be the Percocet talking, but I am damn lucky to be alive. This whole thing has me pretty shook-up. I was completely airborne and doing somewhere around 30-40mph when I hit that tree. If my flight path had been 6 inches off in any other direction, I would have hit the tree with my neck, face, or abdomen, and I would not be typing this right now. The impact was enormous, and I am really glad my ribs were up to the task of saving my ass. I have skied fast for years, and never really thought twice about dipping into the trees at ludicrous speeds. I have had some close calls in the past, but this was my first real injury that endangered my life. I know this will have an impact on my skiing, and I will definitely hesitate the next time I am getting ready to do a straightline or jump off something.

For those of you that know what I’m talking about, how did you get past this? Am I doomed to a life of skiing trees at slow speeds and taking the easy way out of a line?

I am currently staying with my girlfriend’s parents, Penny and Joe, and they have been amazing in helping me recover so far. Thanks Sowul family! I also wanted to say thanks to the Snowbird Patrol and everyone in the clinic. You guys were amazing, so professional, and you made a bad experience much better. Thanks.

For about a month following this accident, my spine was in a weird S-shape because my rib cage was no longer able to keep my body straight. The torn cartilage was more painful than the broken ribs, and I spent the better part of 4 weeks laying flat, while I healed.

It has been over 5 years since this accident, and I’ve had some time to reflect on it. I still do not know why my body decided to wake up after over five minutes of being unconscious, or how I hit that tree so perfectly in the center of my rib cage, which is what saved my life.

The following winter, I had quite a few moments while I was skiing when I  flashed back to the crash. I skied much more timidly that following year, and never left home without my helmet. It took about two years for my skiing to return to the level it was prior to the crash. Sometimes healing the mind takes longer than healing a broken body. I am definitely smarter about my line decisions that I was back then, but I am skiing faster now than I ever have.

I like to re-visit this post from time to time to remind myself of how quickly things can go wrong when you are sliding down a mountain at high speeds. Be safe out there this winter, and live every day to the fullest!

I love deep powder, smooth single track, fresh cut fairways, and pocket aces. I ski fast and mountain bike with reckless abandon. When not in the mountains, I can be found writing code or playing poker in Vegas.
Website: http://kevinhamiltonsmith.com
Read More Posts By Kevin |
Follow: