Ever since laying my hands on Chris Davenport’s Fifty Classic Ski Descents in North America, I have been dying to ski-mountaineer in the La Sals. With the Wasatch snowpack being a sugary heap of facets, my dad and I decided it was the perfect time to chase down some 12k peaks in the La Sals and get in some climbing at the same time.

Winter in Moab is the greatest kept state secret. Rather than dodging RVs full of big-bellied heartland-ers and heavily-accented Euros in 100+ degree weather, we found ourselves utterly alone at Wall Street, Moab’s most popular climbing crag. Classic trad-cracks and inventive sport climbs that usually have teams queued up at the bottom, were empty and eager to take my gear. While it was far from balmy, sandstone retains heat well and with the sun on the rock, my hands felt good in-between red blocks of stone. Looking out, the La Sals beckoned and my heart traipsed about, happy at the prospect of skin-assisted exploration. 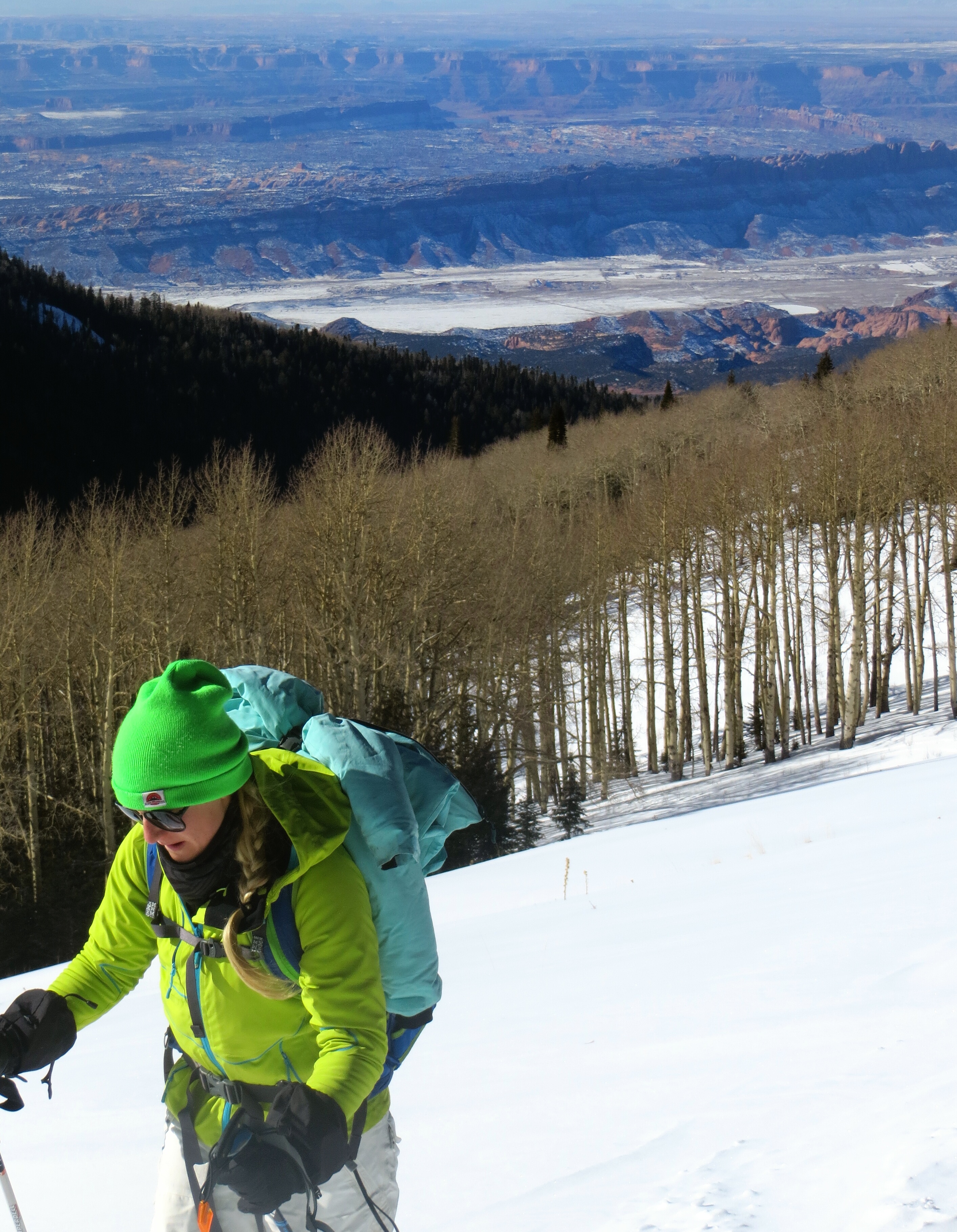 On our first morning, I woke up to an extremely ill-timed and nasty bout of Strep but was determined to head into the La Sals even if it was just for a short tour. While the weather was clear in Moab proper, as we began our ascent to Geyser Pass, the sky overhead became blanketed with shifting cumulous clouds. We watched in astonishment as the car thermostat dropped to 0 degrees. At the well-used parking lot, we layered-up aggressively against the sharp cold and vicious wind. Despite the less-than-bluebird conditions and my rapidly diminishing health, we toured up to some promising looking open trees on the North-west banks of Mt. Mellenthin. At the end of our ascent, we looked down upon the red bluffs below. The juxtaposition of the harsh mountain environment and the dessert landscape below was shocking. On the descent we were gratified with some surprisingly good snow and playful tree turns.

While I had only been in the range for a few hours, already I was impressed by the wildness and dramatic setting of the la Sals. While Backcountry Skiing in Utah and a few other sources (including moutainman extraordinaire, Alex Quitiquit) had provided decent beta, we hadn’t expected to meet such challenging conditions in this odd-ball grouping of outcast peaks. I couldn’t believe the potential of the place. I spent the rest of the day urging my immune system to pick up the fight while hiking about an eerily empty Arches National Park.

The next morning, I felt quite a bit stronger and my dad and I decided to head in the direction of Mellenthin and Laurel Peaks on the off-chance that the weather and snowpack would support a summit attempt. While the skies were clear and the wind seemed to have died down significantly, it was much colder than the previous day.

The local avalanche report gave the current temperature on the top of Pre-Laurel Peak (which was on our route) at a balmy -9 degrees. We were not deterred. Heck, I go ice climbing which is always MISERABLY cold. So, we packed like yetis and began the steady ascent up the “Laurel Highway” climbing trail. While the climb was forgiving and gradual, the temperature in shaded tree areas dropped to around -20. Frozen in the extremities, we continued to climb until we broke tree line.

On the unprotected ridgeline, gusts of powerfully pissed-off cold air tried their best to push us off the mountain. Determined to at least get on top of something before the clouds blew in again, we pushed on to the summit of Laurel (12,271 ft). We debated continuing but upon looking down the connecting ridgeline to Mellenthin, we determined that the peaks had been blown bare to the point where boot-packing would be our only mode of travel…for the next several miles.

Yeah, we left that experience for the spring and more stable avalanche conditions.

After reaching our lack-luster peak, we quickly pulled skin and enjoyed excellent snow down through the “North Woods.” With white noses and foggy heads, we bundled into the car feeling sobered. The La Sals were no joke! The skiing was straightforward but the conditions were truly alpine. Naturally, I was psyched! Who knew?! Southern Utah!

In the spring, this place will be paradise.

The next day, we had a good breakfast and headed back to Arches, keen on wandering around an momentarily empty park. After an excellent hike to Tower Arch combined with some stellar bouldering en route (Note: if dancing up inflated pebbles is your thing-check this place out! Huge potential), we headed to Baker slabs for some techy friction climbing at the back end of the park.

Tired and still coughing, I spent the drive back to Park City going over maps trying to piece together a route that would allow for a traverse of all of the major La Sal summits. Come spring-It’s happening. For now, keep praying for more snow.

I am a native of Park City, UT and embrace all things vertical. I identify primarily as a ski bum with a penchant for claustrophobia inducing couloirs with spicy approaches but have a soft spot for any activity that requires a harness whether rock, ice, or mixed. When I am not in the mountains, I am writing about being in the mountains. Onwards and Upwards. Get after it!
Read More Posts By Annie |
Follow:

One thought on “Running up Bald Ridgelines in Southern Utah: Braving the La Sals”