It’s 11:00 AM at the half-pipe in Park City Mountain Resort and the air is fraught with a particularly spiteful wind chill. The day is dark and gray, the sun unable to break free from beneath a heavy blanket of ominous clouds. But Olympic hopeful Kimmy Sharp doesn’t pay mind to that. Nor does she stress that she is almost halfway through her training window for the day – in a few hours she will run home just long enough to grab dinner and change for the dinner shift at Café Terigo, a local Park City restaurant. The patrons who came in near close last night do not weigh on her mind, nor does the fact that this grueling schedule will repeat for the next five days, for the next few months, barring competition and travel days.

Instead, the 24-year-old contender replays pivotal parts of the run she just performed,making mental notes of the points in need of cleaner execution. She skis toward her coach and breaks just long enough to acknowledge shared sentiments regarding her last trial. She turns her gaze toward the half-pipe, then to the lift. Then, as though pressing “play” were analogous to pushing “reset”, she clicks on her iPod to a tune by The Lumineers and skis off.

The short exchange between coach and athlete mirrors the fact that most things between the team can be left unsaid (which is not to suggest that it often does). It could be that the duo has forty seasons of ski experience between them, over half of which have been spent in competitive fashion. But the athlete-coach bond goes beyond mere know-how: Kimberly “Kim Kim” Sharp and her coach Jessica “Jigs” Sharp are twin sisters with their sights set on one inspiringly leviathan goal: qualify for the 2014 Winter Olympics in Sochi, Russia. If the road to hell is paved with good intentions then both athlete and coach understand that intent alone will not get them to Sochi; they exercise this understanding by training six days a week and waiting tables full time at Café Terigo, where they have worked since the age of 15, to fund the financial costs of such a dream. 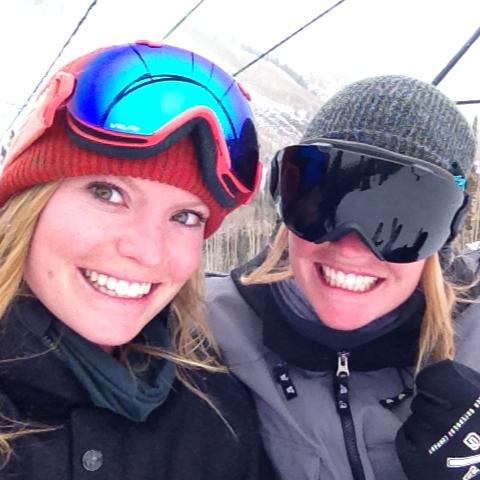 The dream can be traced to the girls’ first day on skis at the age of two. Kimmy and Jessie joined the Park City Freestyle Team when they were nine-years-old and “fell in love with skiing even more.” By ten, they were competing in moguls and half-pipe. During their teen years, Jessie sustained multiple serious injuries that eventually ended her competition career. “Seeing her go through those hard times taught me to be grateful every day that I was able to be on the ski hill doing what I truly love,” reflects Kimmy on RallyMe, a crowdfunding site designed for athletes. After enduring major injuries to her right knee and shoulder, Kimmy made the decision to end her mogul skiing career in order to focus all of her attention on becoming a professional half-pipe skier. In a serendipitous case of the universe aligning with budding dreams, the Winter Olympics came in full force to Park City in 2002 for several ski and snowboard events.

The duo’s display of focus and determination does not mean they are one-dimensional. Despite their demanding timetable, Kimmy and Jessie enjoy preparing home cooked meals for family and friends, hiking with their husky mixes Kweli and Maya, painting, and surfing when their travels allow. It comes as no surprise, then, that their support system is equally as rich. It is not enough to say that Jessie and Kimmy are part of a tightly-knit family; in the Sharp household, lives and dreams are interwoven. Dad Timothy “Razor” Sharp is credited with teaching the girls to ski. The sisters recall mom Liz Sharp’s commitment to supporting their young ambition – driving or flying to competitions all over the country, even going so far as to helping the girls bargain with school to allow them absences for said events. Their older sister Katie is a kinesiologist for the Naval Medical Center and lends support from San Diego by way of fitness regimens and injury advice. 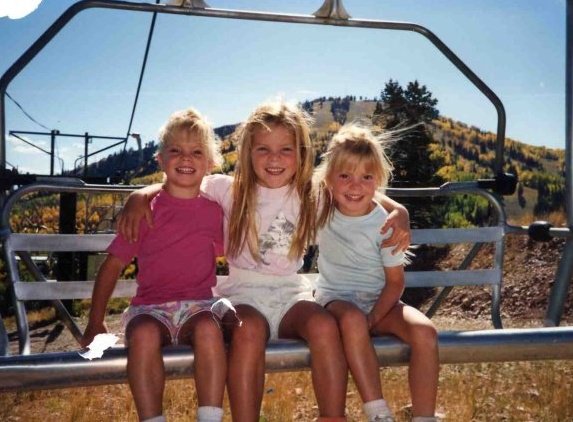 “Family,” as the Sharps understand it, is not confined to blood relations. Beyond the nuclear unit is a colorful cast of local advocates. For one, management at Terigo has always allowed the girls to take off during competition season, despite the fact that their leaves of absence coincide with the resort town’s peak dates for tourism – otherwise considered the best time of year to make money in the restaurant industry. Fortunately, Jessie interjects with signature Sharp gratitude, they are given shifts to earn “a couple bucks for the next trip” whenever they touch home for days at a time. Other supporters include former Park City Freestyle coaches Travis Perkins, Mick Berry, and Chris Marchetti, and longtime friends made on and off the ski hill.

Moral support, however, is one thing – gear, competition fees, and travel costs require a more tangible type. Aside from the recent endeavor at RallyMe, managing and waiting tables at Terigo must cover what a lack of sponsorships does not. Kimmy is thankful for sponsorships from local ski shop Cole Sport and neighboring Salt Lake City company Saga Outerwear, but unlike many athletes with visions of Olympic gold, she does not sport the Fortune 500.

One thing sure to adorn Team Sharp is a decal reading “Sarah.” As far as heroes go, Jessie and Kimmy would be quick to name Sarah Burke, the Canadian superpipe pioneer and six-time X Games gold medalist. Prior to her passing in 2012 following a training accident, Burke successfully lobbied the International Olympic Committee to have freesking events added to the program for the upcoming Games. Other shared heroes include Razor, who served as a Naval helicopter pilot during the Vietnam War, fallen freestyle skiers Shane McConkey and Jeret “Speedy” Peterson, and Martin Luther King, Jr. It is the lot of heroes you would expect from such shining examples of All-American grit.

Kimmy cites not only her successes and podium appearances, but also the downfalls and major injuries as testament to her commitment at being the best freeskier in the world. Triumphant demonstrations of this commitment include First Places at the Junior World Championships in 2007 and the Aspen Open in 2011, as well as dozens of podiums in North American Cups and World Cups. Kimmy and Jessie fledge beyond hoping for the honor to represent the U.S. on history’s most renowned global stage – they work for it. They will spend much of December in Colorado continuing to train and competing in the Dew Tour and the first of three U.S. Freeskiing Grand Prix, an Olympic qualifying event. January will present Grand Prix events in Northstar, California and a final U.S.-only event in their hometown. “If you do well there, you basically stamp your ticket to Russia,” Kimmy explained in an interview by the Park Record, a local newspaper. For the sisters, it is not about celebrity but about celebrating a sport that has shaped their lives.

Even on a day such as this one, one that does not have the instant allure of a bluebird day, one that follows a long night’s work and precedes the same, the girls are more than happy to wake up early to head to the hill – “just as we have our whole lives,” says Jessie, smiling. While we do not always have the luxury of knowing where a road ends, Kimmy and Jessie intend to find out just how far the road to Sochi will take them. They do it for each other and for their families, their hometown and their country, and to push their beloved sport for childhood ski heroes beyond the grave. They will do so one lift – and one shift – at a time, and they will do so together.

Take part in Kimmy’s story by spreading the word and donating to her RallyMe page: https://www.rallyme.com/rallies/304