As I front-flipped violently with a mouth full of snow, all I could think was “Damnit! my turkey sandwich is so squished.” It was also, “Shit! I should have sent that air a little more to the right!” and, “Head? – check! Neck?- check! Extremities? -good to go!”, and of course “Now where the F*** are my skis?!” 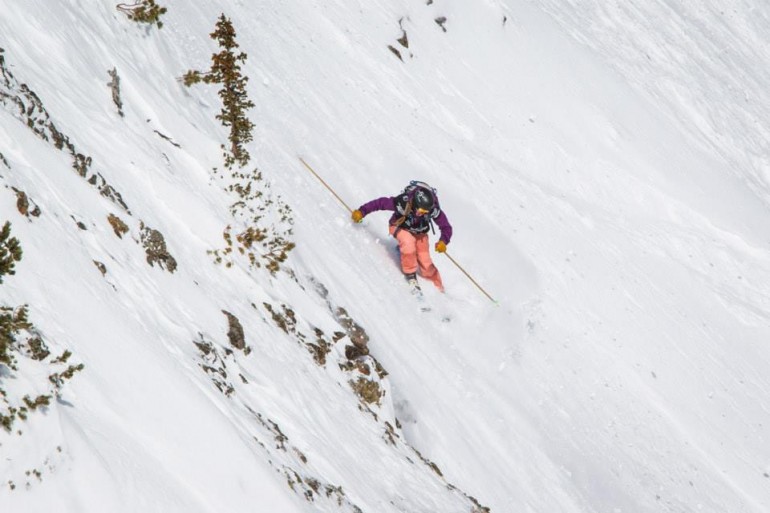 My 2014 competition season came down to one run on Headwaters at Big Sky Resort (formerly Moonlight Basin) in Montana. When I met the Headwaters last season, I was a couple weeks out from a helmet-shattering concussion which plagued me with a paralyzing fear of falling. The Headwaters venue is a scree field. For those of you who don’t know what “scree” is, it’s a mound of various sizes of shard-like rocks. They’re unforgiving little bastards, poking up through the snow or hiding just beneath waiting to grab you.

So this final competition of the season put me face to face with fears that had gotten the best of me in the past.

Here’s my two-cents on fear: I don’t mind it at all. I’ve accepted the fact that lots of things scare me; some rational and others completely irrational. (Knife-ridges, heights, and spiders are my biggest pitfalls.) Fear is OK. Fear is where opportunity meets common sense. I don’t see a problem with considering the risks of failure. If it’s within my ability to meet and conquer my fear then —Bring it On! I’ll send it, all while shaking in my boots.

The twisted cousin of fear is regret. Unlike fear, which I hold close to my heart, regret can stay the hell away from me. There really is nothing worse or more damning. To think you could’ve done better is such a kick in the ass; fear doesn’t haunt you the way regret does. At my last two competitions I’ve found myself sidled with that old bully Regret. I’ve sat at the bottoms of venues, staring back after my run wondering if it was enough, only to find that the judges did not think so. Time after time I’ve changed my plans mid-run and let my fear win.

With one competition between me and the end of the season, I refused to go out on regret. Let me be clear, there’s a distinction between regret and hindsight. There will always be hindsight, and it will always be 20/20, but regret needn’t accompany it. I chose my line after careful inspection through binoculars (visual inspection only is a whole new ball game, FYI). The snow conditions were of the confidence boosting kind – soft, solid base – totally send-able. And finally, a friend called me the night before to remind me “what did I have to lose?” and most importantly to “keep my eyes open!”

Well, they got me. Those sharky, scree bastards grabbed the back of my ski on my take-off and sent me into an impressive series of front flips down the venue. In hindsight, was I disappointed? Sure. Who wouldn’t be? I picked a line within my ability and skied strong until my fall, and being the last competition of the season I would’ve loved to have stayed on my feet. But regret? Nah. Not the kind of disappointment I’d found earlier in the season. I stuck to my guns, and this time everything made a little more sense.

Every once in a while, falling is a great reminder of what it feels like to really push your comfort zone. There’s opportunity and enlightenment in failure. And if I never give myself the opportunity to fall, when am I going to practice my quadruple front flips?

Skier. Athlete. Snowsports Enthusiast. Like any East-coaster with an addiction to snow, I packed up my Subaru and drove west. For the past 3 years I've called Alta and Snowbird my home. Oh, and what a long, strange, epic trip it's been.
Website: http://www.skiexplorelearn.com
Read More Posts By Hannah |
Follow: