Friday April 17th, my college ultimate frisbee team, Spiral Jetty, packed our bags and headed to sectionals in Boise, Idaho.  Leaving Salt Lake City during rush hour slowed down the start of our road trip, but good friends and silly music made the time pass faster.  About 1.5 hours into the road trip, my car got a dreaded call from our fellow teammates.  12 girls left Salt Lake City and 1/3 of them were in a roll-over car crash outside of Burley, Idaho.

The next hour was spent playing phone tag with different teammates trying to figure out what had happened, if those in the crash were okay, and how we were going get them home or on to Boise.  2 of our girls were taken by ambulance to the hospital because they were going into shock.  Luckily our coaches were 10 minutes behind those in the accident and able to help those in the crash get their stuff and help get the rest to the hospital.  The rest of the night was spent in the hospital, waiting for news on how our teammates were.  All 4 girls in the crash and the one boy (on the men’s team) were cleared with no major injuries, just bumped and bruised.

While waiting in the hospital, our team had to make our biggest decision of the season, do we continue onto Boise and play at sectionals with 8 girls or do we turn around and head back to Salt Lake?  When one of the girls in the crash heard that there was even the slightest possibility that we weren’t going to play she told us that we had to at least try. If we didn’t, those in the crash would feel like it was their fault and would make everything worse than it already was.  With that in mind, our team made the decision to continue on to Boise to play in sectionals. 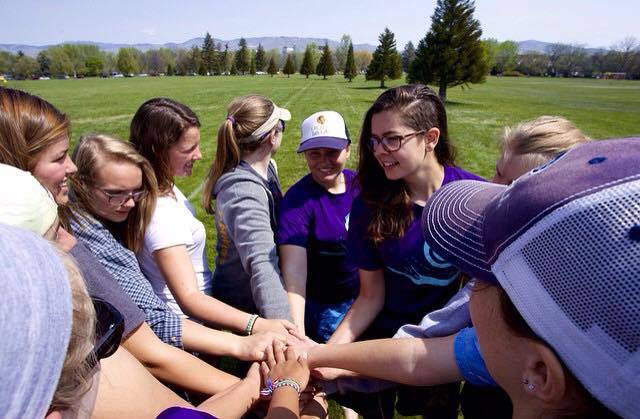 Saturday April 18th was Day 1 of Sectionals, with Game 1 featuring Whitman vs. Spiral Jetty.  Whitman is a team that goes to nationals, Spiral Jetty is still a developing program.  Whitman brought 27 girls to sectionals, and after the crash, Spiral Jetty had 8.  With this in mind, our goal for the weekend was to build chemistry between our players and to have fun.  Our motto of the weekend was dropping knowledge bombs.  No one expected us to go score 7 points against Whitman.

Saturday night was spent team bonding in the hotel, with lots of chocolate.  We played truth or dare games and never have I ever.  We may be in college, but I secretly think we are all 12 yrs old.

Sunday April 19th, Day 2 of Sectionals, Game 1, Spiral Jetty vs. Boise State.  After some mix-up with when games where supposed to start, we ended up playing Boise State for our last pool play game.  We lost 9-8.

Game 2, Boise State vs. Spiral Jetty.  The first game in our bracket play was against the team that we just lost to in our last game in pool play.  SJU pulled together and won against Boise State, 8-6.

Game 3, Montana vs. Spiral Jetty.  By game 3 of Sunday and game 7 of the weekend we were down to 6 players due to injuries, we didn’t have enough players to continue on to play our last game.  SJU had to forfeit the game to go to regionals against Montana.

Turns out that a car crash couldn’t stop us.  SJU went 3-3 that weekend, placing 3rd at Big Sky sectionals.  This team came together after a terrifying experience, kicking ass when no one thought we could.

The skiing wasn't very good in Michigan so I moved to Utah :) A figure skater, sailor, skier, and ultimate frisbee player who loves hiking and camping. University of Utah Geophysics and Atmospheric Sciences
Read More Posts By Jacky |
Follow: