A First Winter Thru Hike of the Pacific Crest Trail

Last winter Justin ‘Trauma’ Lichter and his partner Shawn ‘Pepper’ Forry completed the first winter thru hike of the Pacific Crest Trail.  For those unfamiliar with the “PCT” it is a 2650 mile trail from Canada to Mexico that cuts through 3 US states including Washington, Oregon and California.  This diverse trail crosses deserts, mountain ranges, deep forests, glaciers and volcanic peaks, and is considered one of the most difficult hikes in the world….in the summer!

For the western US states the winter of 2014-15 was very mild compared to normal winters.  Many areas reported record low snowpack, which might lead one to believe that this would be a great year to attempt a winter thru hike on the PCT.  However, it turns out the lack of snowfall and unpredictable weather patterns were a major challenge that almost forced Trauma and Pepper to abandon their expedition.  Not too long after starting in Washington, Trauma and Pepper found themselves caught in an unexpected storm that left them debilitated with frostbite.  Later on the trail they had to ditch their ski touring setup (due to lack of snowpack) and rely on snowshoe travel, which takes more time and burns more calories.  Thru hiking in the winter is filled with challenges, especially when it comes to food.

For many long stretches, the PCT is a desolate trail that cuts through uninhabited wilderness.  Trauma and Pepper often went weeks without seeing another person.  Many small towns with re-supply stations along the PCT close for the winter, which meant Trauma and Pepper had to be meticulous with their meal planning.  Cold weather and minimal pack space greatly limited the types of food Trauma and Pepper could eat.  According to Trauma, “our breaks were centered around eating. Any time we stopped we would spend that time ingesting calories. And if we took a break we couldn’t sit still very long because of the cold, so we had to keep moving.”  The most efficient calories came from conveniently stored nutrition bars.  The guys rotated between Lara Bar, Pro Bar and Kind Bar and ate 10 bars each per day, receiving 1/3 of their daily calories from bars.

Cooking at night proved to be another serious challenge.  Often times Trauma and Pepper had to melt snow for the next days water supply, since they frequently did not have a running water supply available.  Due to the terrible snowpack there was often “sugary” snow, which does not hold much water content and takes up to 2 hours to boil down for the next days needed water supply.  After a long day of hard work, the guys were often hungry, tired and ready to sleep, but had to commit an extra two hours of work to melt water.  This left little time for cooking dinner.  Trauma and Pepper relied on quick one-pot calorie dense-meals such as, Top Ramen, Knorr Sides, angel hair pasta, cheese, beef jerky, instant mashed potatoes, mac and cheese, or any combination of these.  Trauma was especially a fan of the instant mashed potatoes because they can be made without bringing the water to a boil, which saved time and fuel. 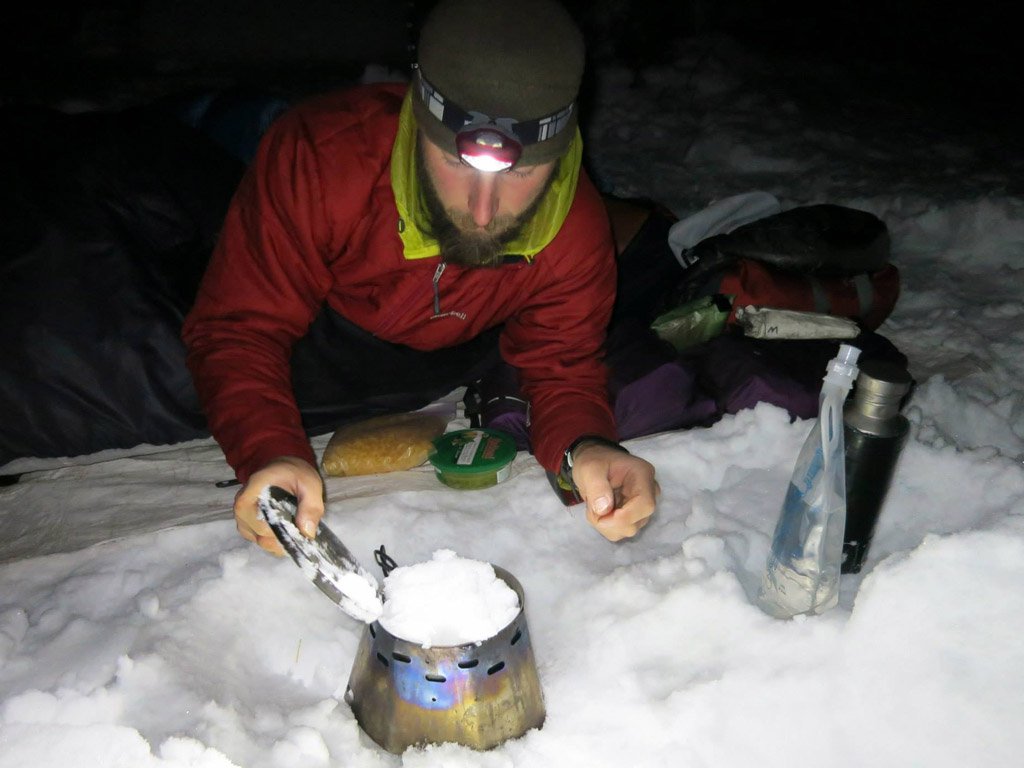 Snacks were another essential in their backcountry pantry.  While dinner was cooking or snow was melting, Trauma would often snack on chocolate chips, Justin’s Hazelnut Butter, and Justin’s single serving almond butters.  The single serving packets were especially handy because they were easy to ingest and provided quick calories to his tired body.

In addition to making food, getting supplies was often another daunting task.  Trauma and Pepper had to hike miles off the trail to find open grocery stores or to access post offices with re-supply boxes that they had mailed to themselves before they embarked on their journey.  One much appreciated surprise came from a ‘trail angel’ who hiked miles to leave an anonymous supply box at a remote location.  Even though they were often isolated, the support from the PCT trail community was received throughout Trauma and Pepper’s trip.

After an astonishingly fast 132 days Trauma and Pepper reached the US/Mexico boarder to complete the first successful winter thru hike of the PCT.  As they signed the book at the end they were greeted by friends, family, and a champagne celebration to end their historic journey.

Adventure Dining Guide is a web based series about making your adventure more gourmet. I started ADG because I wanted to showcase a different side of the adventure, and to give backcountry meals the recognition they deserve. I'm always searching for guests and recipes, so feel free to reach out and share your outdoor culinary creations with me.
Website: http://www.adventurediningguide.com
Read More Posts By Michelle |
Follow: