Since this is primarily a west coast blog, I like to contribute occasionally from the southeastern mountain community.  I’m currently based in Boone, NC but I recently competed at the Allegheny Highlands Triathlon in Clifton Forge, Virginia.  Hopefully this race report will be a glimpse into the hospitality of the southern racing circuit.

Race day registration for the Allegheny Highlands Triathlon started at 7:15am at the senior center in the tiny community of Sharon.  But at 7:15 in the morning, there wasn’t a soul in the parking lot.  Fog rolled off the river, and it looked like rain.  At 7:20, a pair of headlights appeared and turned into the gravel lot.  Shortly after, a second pair also swung in and parked.  The gun was scheduled for 9:00 am, and this was the crew responsible for advance registration, fashionably almost exactly sort of on time.

I had dragged my dad along for the race, but there hadn’t been time for him to pre register, hence why we were here so early.  Susan Hutchison, the veteran race director, runs a tight ship though, and we got him signed up and received our race day goodie bags without a hitch.  Between Susan’s leadership and the incredible community support, the Allegheny Highlands Triathlon has become one of the most hospitable races that I’ve ever had the pleasure of competing in.  The race is part of a larger triple crown series sponsored by Devil’s Backbone Brewing Company in the southwestern mountains of Virginia.  This was my second time doing the Allegheny Highlands, but I somehow always miss registration for the earlier races in the series. 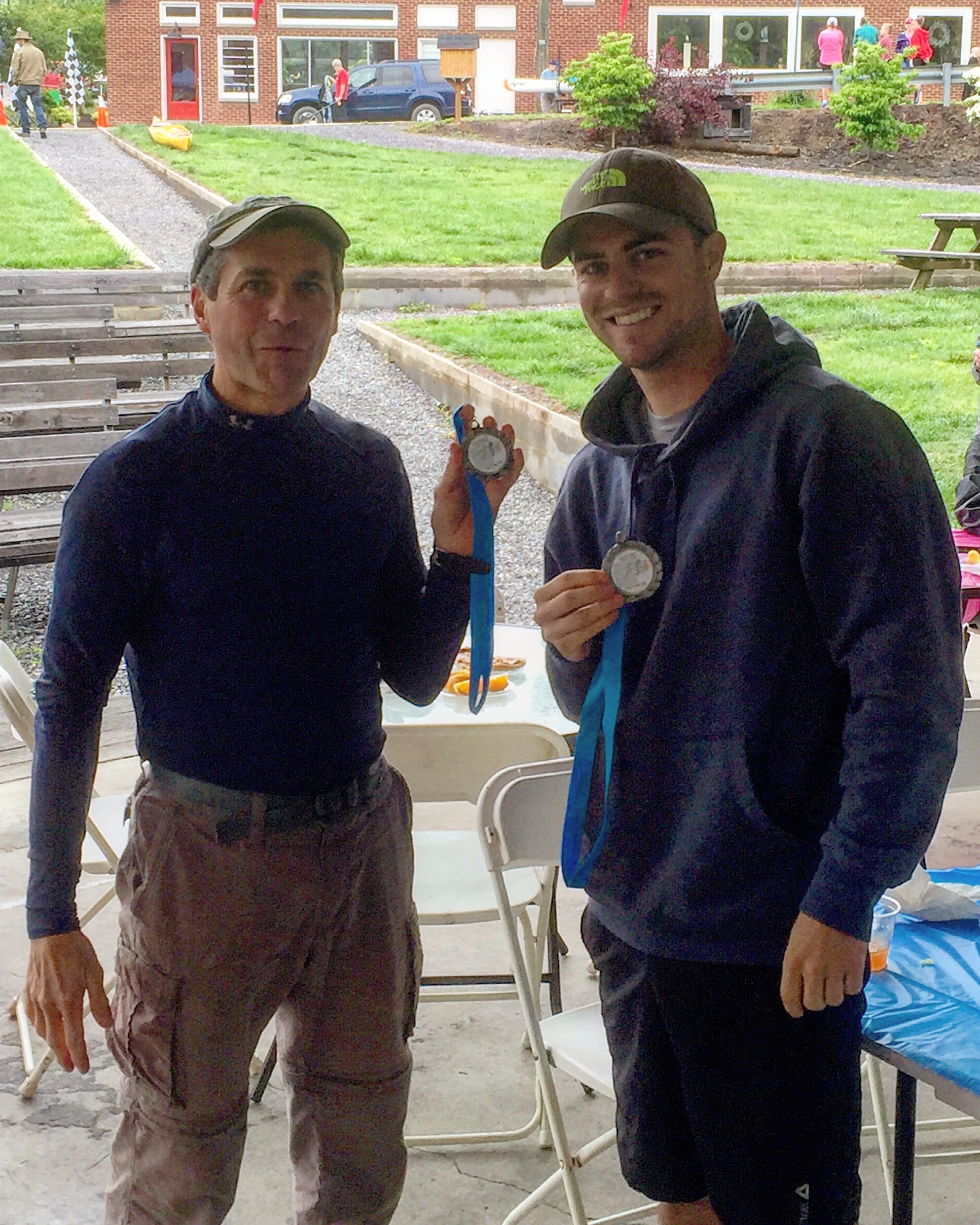 This particular triathlon is unique because instead of a swimming leg, it has a five mile paddle down the Cowpasture River.  It also changes from the traditional “Swim, Bike, Run” format, and instead the order goes “Run, Paddle, Bike.”  This race was perfect for my dad and I because we are terrible swimmers.  We try pretty hard, but it’s miserable, always has been.

The race begins with an out and back 5k running leg, starting and finishing at the Sharon Senior Center.  Racers jog through the gravel parking lot on a 100m transition down to the boat ramp and launch onto the Cowpasture River for their paddling leg.  The Cowpasture is fairly calm, with a few ripples to keep it interesting.  Mostly it’s just hard work.  Five miles starts to feel pretty long when you’re going as hard as you can.  I felt pretty good on the run and even ended up hitting the water first, but I was almost immediately overtaken by one of the Allegheny Highland’s own, a local biking legend by the name of Jeremy (I never did get his last name).  I remembered Jeremy from the first year that I had raced.  I remembered him because he had his boat and bike loaded on his car and was slowly pulling out of the parking lot as I was puffing into the finish line.  Hey Jeremy.  So nice to see you again.  Clearly the rugged mountains of southwestern Virginia have served him well in his training and racing career.  He was a perfect gentleman throughout the race, despite winning the entire event by a sizable margin.

The paddle section ended under a scenic railroad trestle, and members of the local high school track team were waiting to help me pull my boat out of the water.  They insisted that “we’ve got it from here” and motioned me up another short 100m gravel road transition to my bike.  I shed my lifejacket and they loaded the kayak onto a trailer to be hauled into town and deposited at the finish line for me.  The service didn’t end there.  The entire police force of this forgotten mountain valley had turned out to keep the racers safe.  Every intersection on the 13 mile route was guarded by a state trooper or a sheriff’s deputy.  Motorcycle troopers buzzed back and forth over the entire bike route, making sure that everybody knew where they were headed and nobody was harassed by motorists.  The river and bike legs both cut through the steep southern Virginia mountains and offered stunning scenery the entire time.

The bike leg led us straight into the town of Clifton Forge, a small mountain town that gained most of its economy from the railroad that cut through on its way to bigger hubs throughout the southeastern United States.  We thundered across a highway bridge with the river far below, wound through some stop lights (motioned through by law enforcement of course),  and then whipped down a long downhill finish into the chute.  Unfortunately, we were in a hurry.  My dad had work obligations in the afternoon, so we were unable to stay for the awards ceremony or the meal that was provided for all the participants.  We checked in with Susan one more time before we left and picked up our participant medals.  She had raced the running leg as part of a relay team and was now happily directing food setup in her racing singlet and number.  She was disappointed that we couldn’t stay for the awards, but insisted that we fix a plate of food for the road.  Lasagna, salad, breadsticks, and cookies for dessert.  The town of Clifton Forge knows how to put on a spread.

By the end of the day I was convinced that this was the best race that nobody has ever heard of.  It was unique, it was well run, it was heavily supported by the community, it was won by a freaking local, and they stuffed you full of home cooked food as soon as you crossed the finish line.  What more could you want?  Clifton Forge, Virginia.  Don’t you change a thing, we’ll be back next year.

Outdoor guide, originally from Harrisonburg, Virginia but now based in Boone, North Carolina. Let me tell you a story.
Read More Posts By Aaron |
Follow: