Whining, Highlining, and Climbing: A Trip Report from the Desert of Southeastern Utah

Cold, parched, and aching. Processing the tempo of my raging headache, I could easily accept that I was in for an apocalyptic hangover.  This time – contrary to the ones past – this self-inflicted illness is not the effect of too much hard drinking, although whiskey was involved, but the combination of a festering cold, a defiant cough, and the two-thumbs-up-redbull-in-your-coffee kind of psyche we had been fueling off of.

The desert, as distinct and defined an environment, must be, by the loosest sense the most relaxing place on the planet for me.  Taken from the city, stripped of the wrong perspectives, and surrounded by opportunities born from the territory – the chances of escape are endless.

The red sand stains, not like wine on a bedsheet, but it find its way into the cracks, creases and crevices of everything foreign.  I awoke, eyes sealed lightly from the dry wind, I awoke to a blanket of red and chapped lips. And how the water tastes and feels!  When I was younger, I had read stories of alpinists and climbers far off on a perch too alien to imagine, with only a cup of tea clasped between their hands and feeling the life literally pull back into them.  Maybe it’s overdone, but the dehydration and insurmountable beating of my head was enough to be imaginative to the desperate. 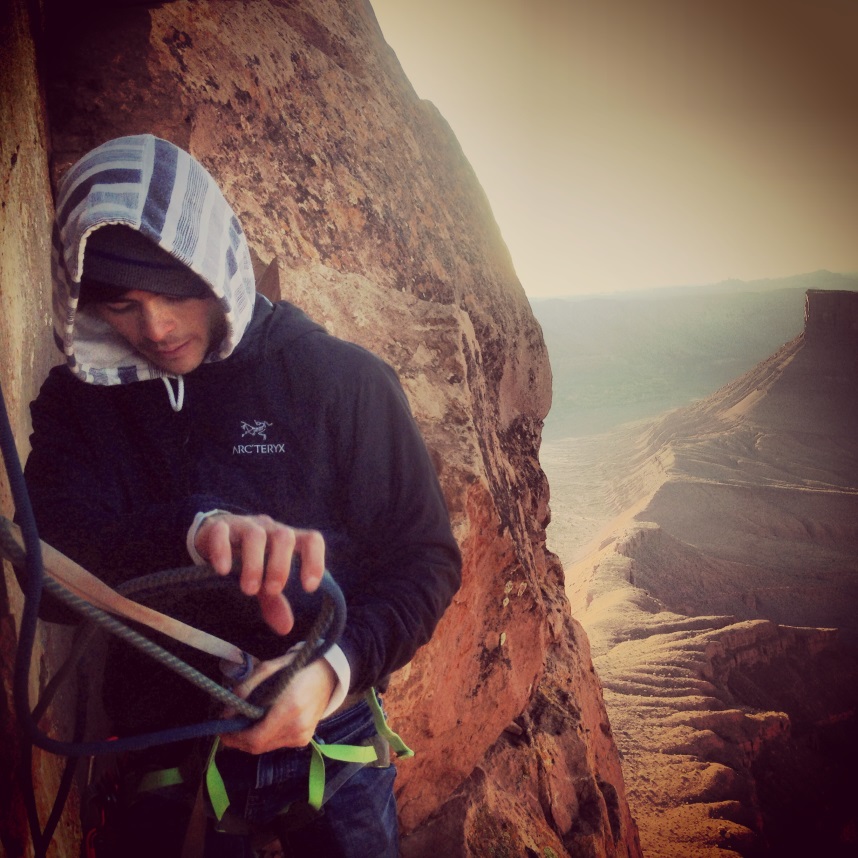 Lam was clearly fairing much better than I. He looked fresh, as always, with a shit-eating stoked grin on his face. Could I blame him?

We had arrived in the desert outside Moab, UT – to tick the classics, visit places new, and get the blood pumping.  Amidst the federal government shutdown, we sought rowdiness and long desired adventure.

We were awoken by our friends, Andrew and Emma, and we decided to wander up Castleton Tower, a first for both Lam and Andrew.  Given our party size and level of skill, we decided on the North Chimney (5.8+, 4 pitches). After the relatively easy approach up the talus cone, we joined other climbers from far and wide, looking to get up the tower.  The sun was out, the wind was low, and the day was young.  Some strangers displayed attitudes, but we dismissed this, and were on route. 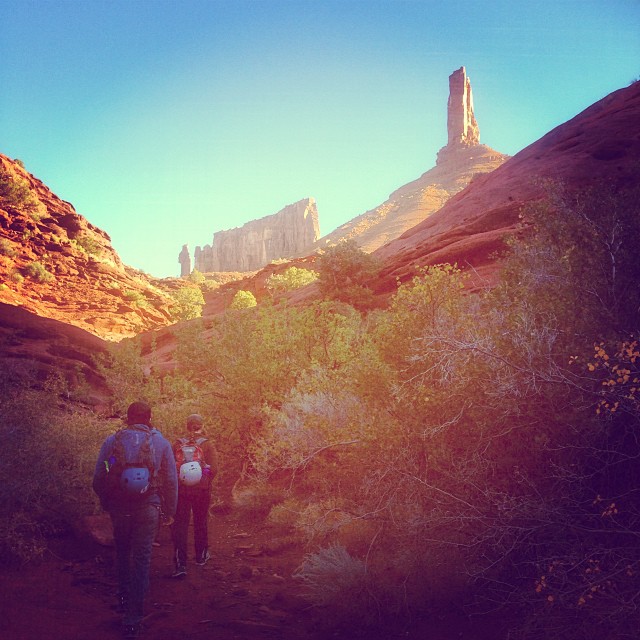 The first pitch, arguably the best 5.8 in Castle Valley, climbs dual hand/fist cracks to a bulgy crux.  The second pitch starts with a short offwidth to fun tower-chimney climbing past loose looking blocks. The 3rd pitch finishes the chimney and involves an airy step over. The summit pitch climbs juggy features and slippery but positive calcite feet to the top.

We summited under an hour. Yet we spent the day atop the island in the sky.  As the first team up, we waited for our friends.  Unbeknownst to us, they were slow getting on route and climbed behind a party ahead who were making progress, slow but positive progress. 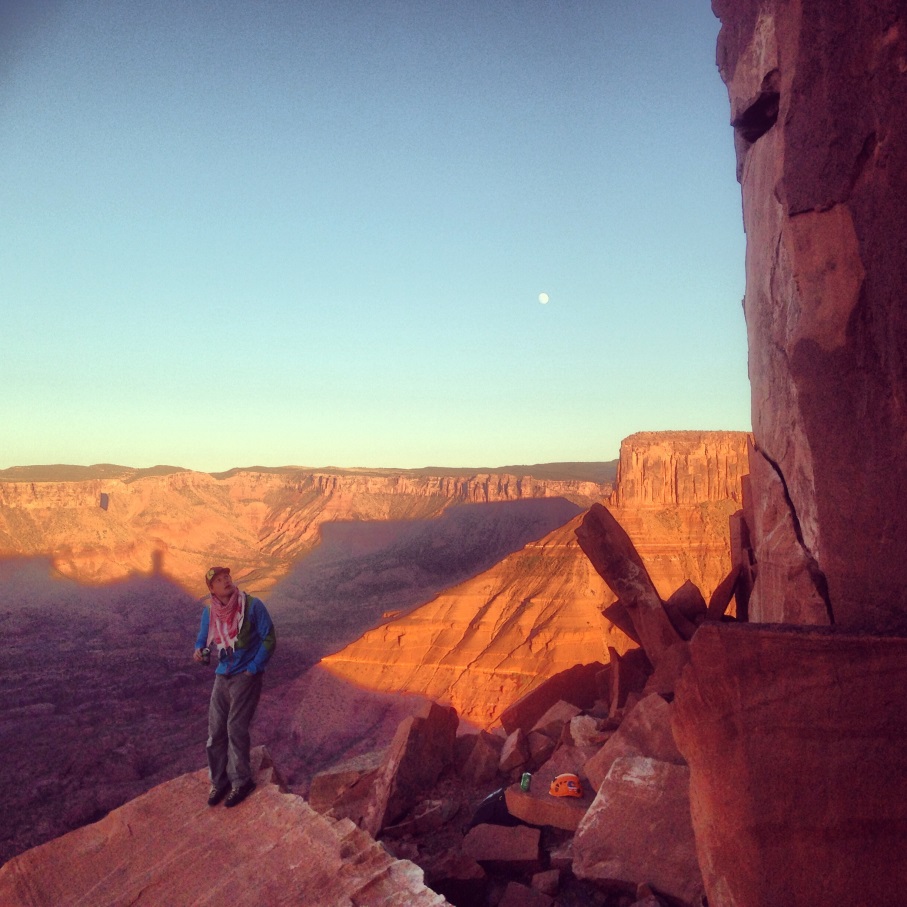 We met others as they summited.  There were Germans, Canadians, and many from close by.  All seem to be climbing the tower for the first time, and their wide smiles admitted it.  We talked shit with our new Canadian friends about French fries, gravy, syrup and socialism- we got off easy with some sharp jabs on US foreign policy. Yet they all seemed to rappel as quickly as they came.

We took a summit photo for everyone.  We listened to the stories told only in places where our reach extends ever so much closer to the sky. We waited; the sun scrolled its rays over the desert landscape, and before we were shrouded in darkness, we were greeted by our friends, and, yes, they were smiling too. 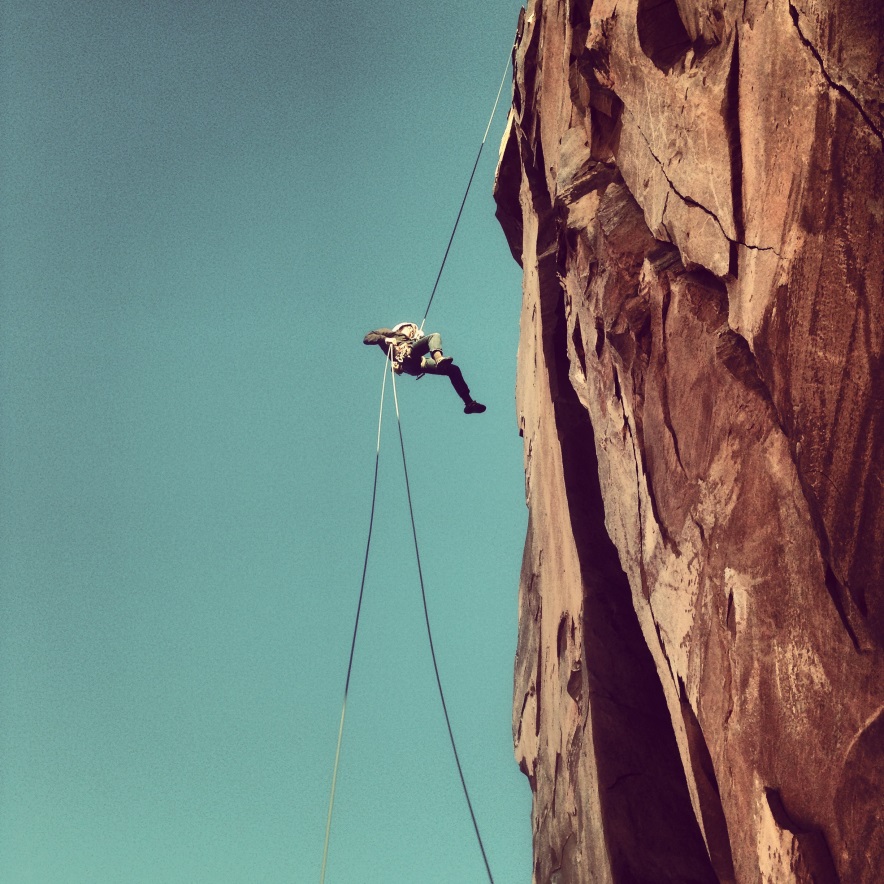 After a short battle with Mexican food in town, we drove the trucks out into the night, into the flanks of Canyonlands National Park.  Excusing ourselves to an impromptu campsite at the correct mile marker, we sat beneath the autumn sky, bathed in moonlight, and watched the stars spin round.

Even with the lunar light cascading shadows, it appeared as if the stars, the Milky Way, and darkness of the night were just within reach.  Maybe this is why we go up. Why we climb into the sky, as to see if we can reach out and touch the celestial bodies, to be part of the grander you, the better of us.

The following morning, after a bit of a later start, we wandered out into the desert.  Guided by a rough estimate derived from a vague search on Google Earth and some random forum posts online, we went looking for our next objective.  After about 2 miles we stumbled upon the Fruit Bowl – a highlining paradise.  The sandstone chasm cuts into the flat plateau landscape and drops away 100’s of feet to the canyon floor.  On either side of this naturally formed “bowl”, anchors have been bolted into the stone to allow the rigging of our highline kit.  After much redundant checking and tensioning, we walked. 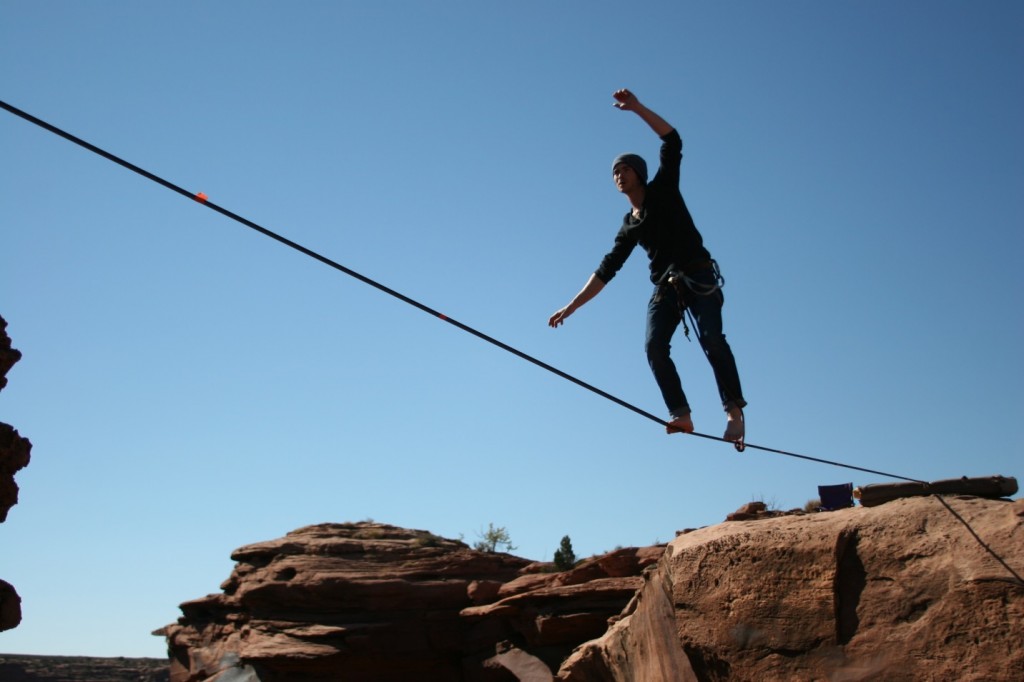 Highlining is such a distinctly vitalizing sport. The moments seem to stand a little more still, and every movement is so much more reactionary, with the fear and consequences looming.

My first chance at the walk ended in a full length whipping fall on my leash. I thought the line was tensioned a little too much and was too stiff.  Lam went next.  He managed only slightly better, but caught the line with his hands.

The confidence in the rig was now much higher, and we were psyched.  Andrew tried next – took a few steps and swung – catching the line barely in his hands.

Emma hesitated, but no one blamed her.  She eventually made numerous attempts, each ending in a full length whipping fall – bold! 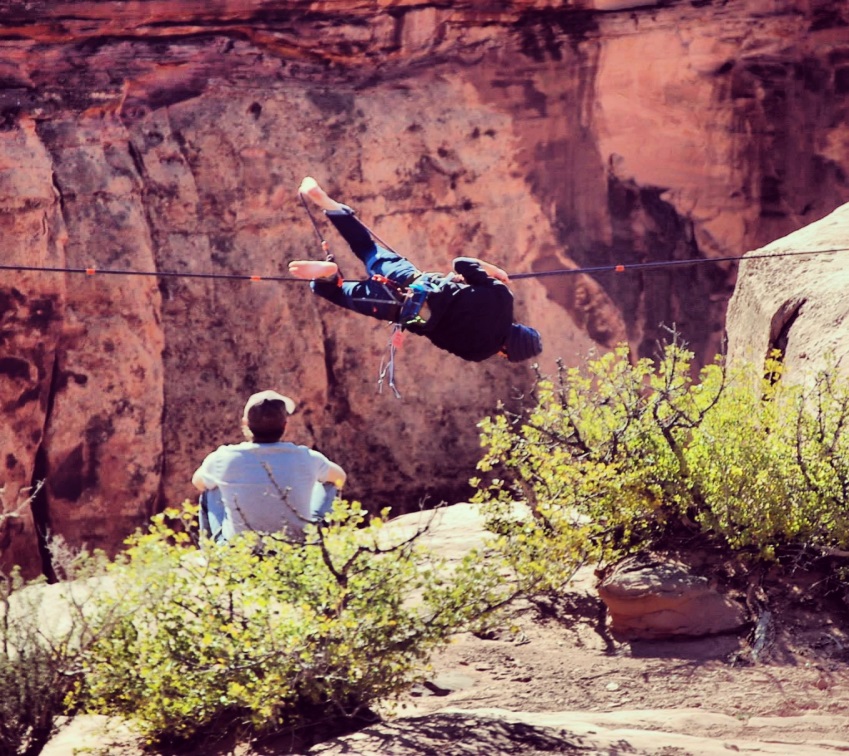 I leashed up again – took a few steps unto the line and corrected my balance. Out on the line, it seems that all senses become significantly acute.  The cold air drafting up from the chasm feels refreshing cool.  The line tension can be manipulated with only the slightest adjustment of body positioning.  My gaze is fixed – on the end of the line – on the objective.

Each step became independent from the last and the dynamic realization of each action became apparent.  As I stepped off the line, I let the air out of my lungs. 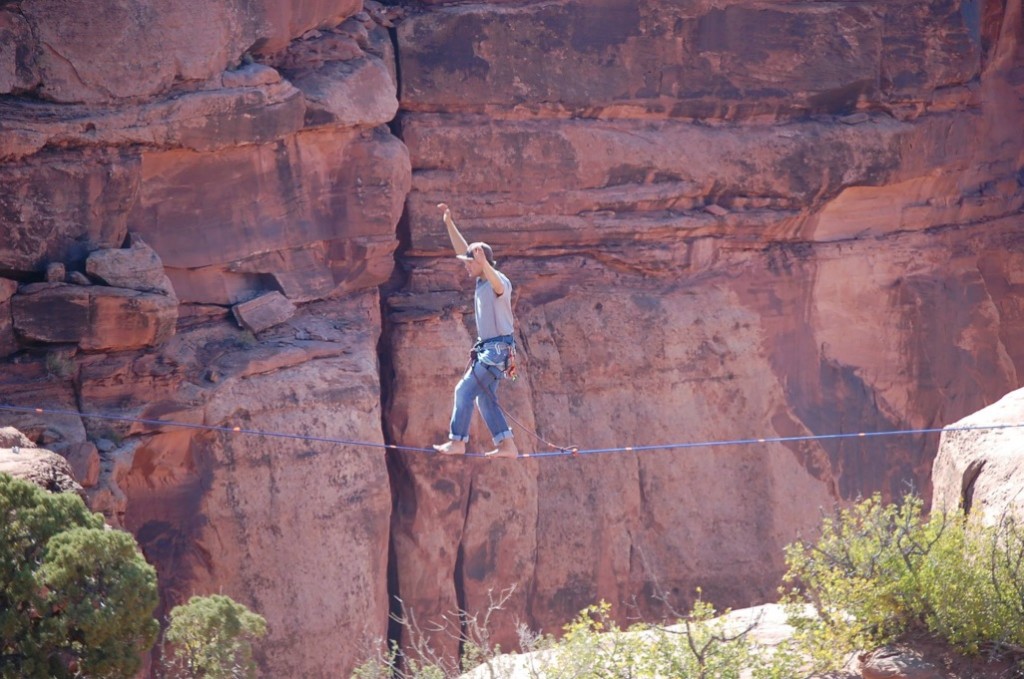 We spent the remainder of the day enjoying the solitude, a good bottle of wine, and a few crack climbs closer to town. Andrew and Emma left that night to be back at work in the morning, the slog of the weekend warrior. 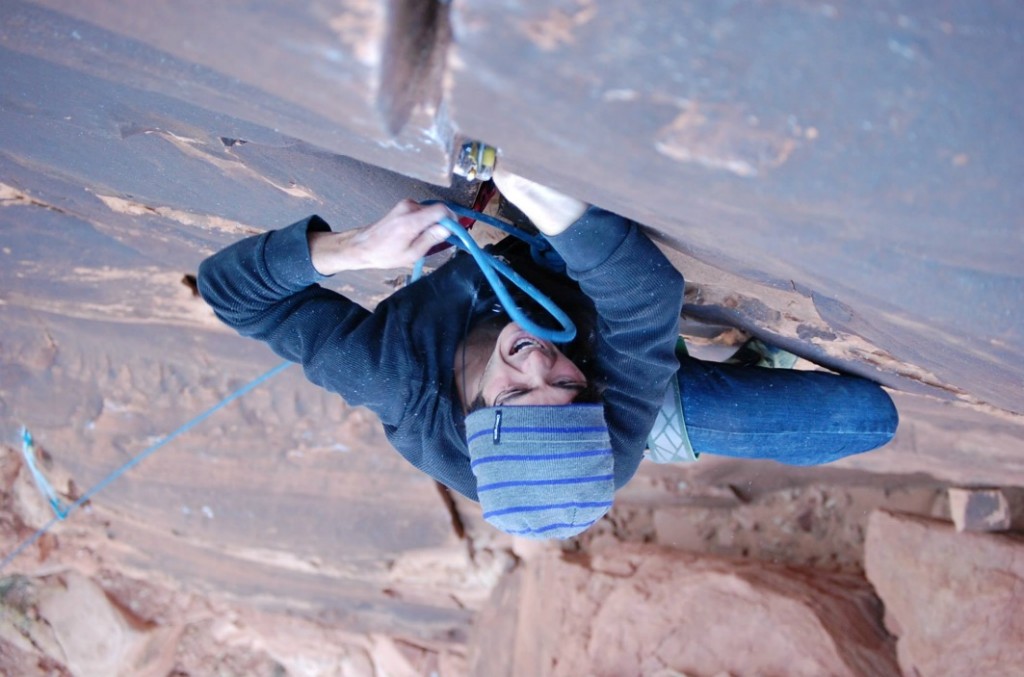 That night, Lam and I camped out near the trailhead of Millcreek Canyon. Millcreek, a sport climber’s paradise, sits inset in the foothills of the La Sal Mountain Range east of the town of Moab. For those that haven’t enjoyed this area – be warned –  it’s a bit runout at times, the climbing often sandbagged and finding it seems to be a crux in itself.

We spent the frigid morning climbing routes, Lam onsighting a few harder routes, and appreciating some of the best stone both of us have ever laid our hands on.  By mid-morning, the cold I have been fighting off for the week had set in.  Coughing fits led to brewed coffee and the decision to head somewhere with more exposure to the sun.

During the fall season, the town of Moab turns into a bustling hub of outdoor crushing.  With all the psych abound, comes the hordes of people.  It is often a struggle to find good camping while cruising from place to place.  After leaving the chilly slopes of the La Sals we settled for a day of light drinking and pebble wrestling at Big Bend Boulders. 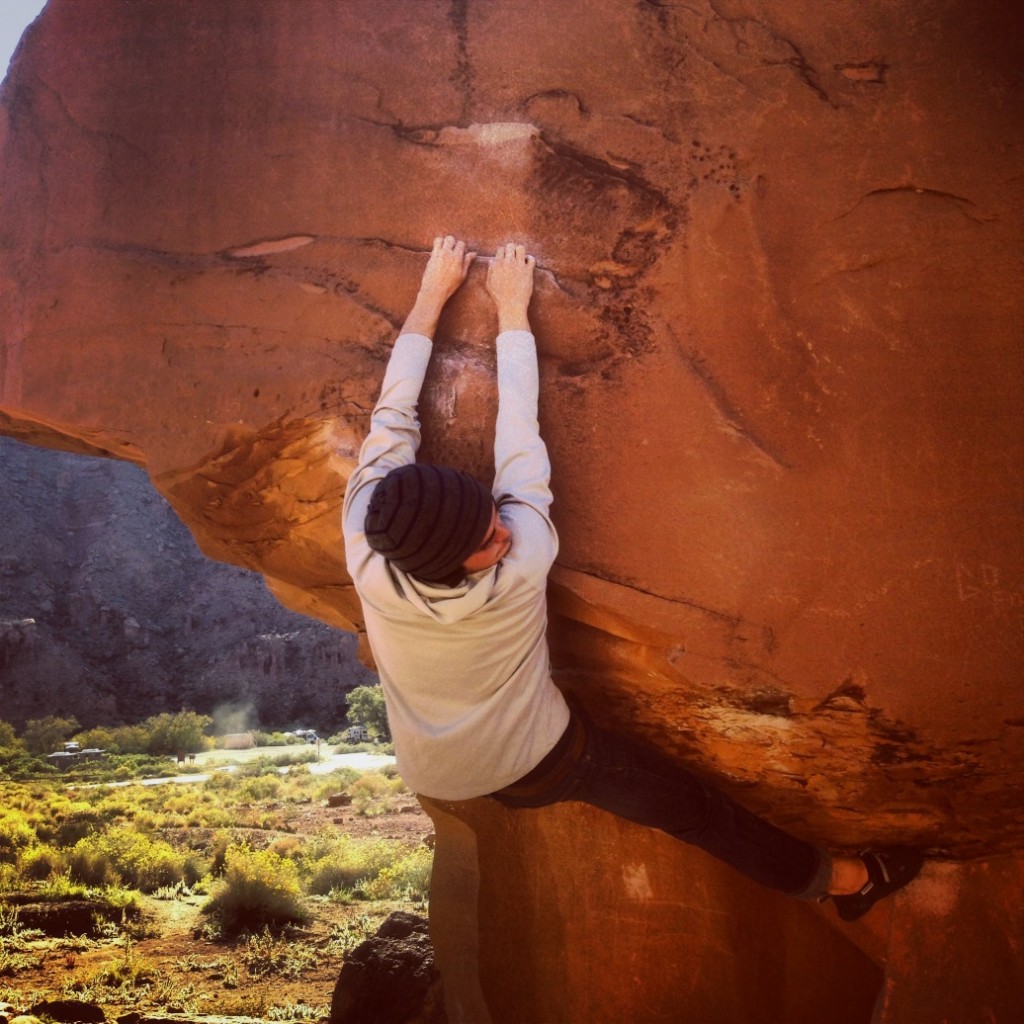 We dabbled, sent, flailed, and shared libations with those who were around.  We spent that night drinking corn whiskey with some new friends while sandbagging them into trying Ancient Art. I love the people you meet in places like the desert. They share your sentiment, they have been places where you wish to go and their experiences only enrich the journey we find ourselves on.

The next day, the last day of our trip, we drank our coffee black.

Lamwise the Brave – the nickname I’ve given him for his fearless efforts and strength on the sharp end – was psyched. I had mentioned earlier in the week that we should try a route up on the Lighthouse tower, “Lonely Vigil, 5.10”, a tower classic that climbs a variety of pitches to a hoodoo summit. 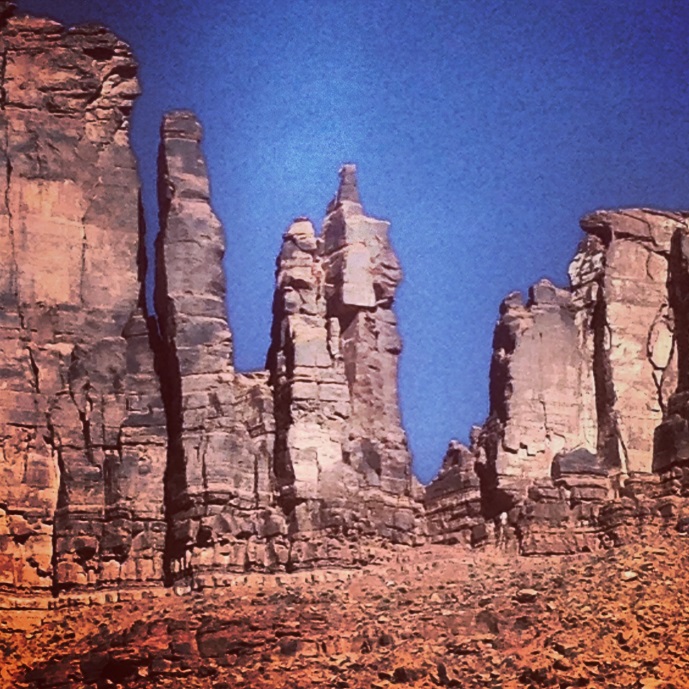 We swung leads – in which we take turns leading – I started up the first 5.10 pitch, pulled through the slightly overhanging fist crack and swam my way through awesome handjams to the belay ledge.  Lam followed, cursed a bit at his small hand size, but cruised through.  Lam racked and started up the stellar third pitch with some great liebacking and some funky technical stemming.  He crushed the pitch, made it look easy to be honest.  I followed him up, finding different beta at times, but remarking the brilliant climbing as I made my way to the belay.  One more pitch led us to the base of the Hoodoo summit.  We hesitated and glanced at one another wondering how to surmount the overhanging boulder perched 500 feet high above the canyon floor with no anchor to be seen.  I tied in and made some moves to the summit block; I tagged the summit, turned around and laughed.  Lam smiled. 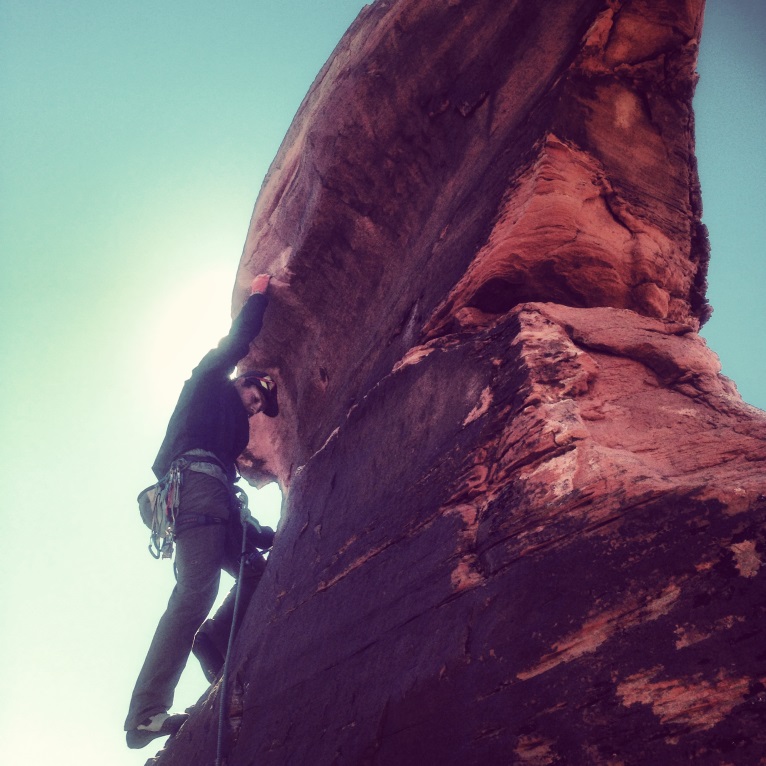 Back on the ground we threw our packs into the truck and sat on the tailgate.  I pulled out the bottle of whiskey – we both took a hardy pull.

My experiences seem to be ever more defined by the moments of spontaneity, commitment, and good company.  My expectations have only been limited by a lack of effort but with good friends there has never been a moment of disparage.  There never seems to be a lack in the energy of going forth and designing an adventure, as minor or as grand, into the places unknown with confidence and that ever present shit-eating-grin.

2 thoughts on “Whining, Highlining, and Climbing: A Trip Report from the Desert of Southeastern Utah”