It’s been less than a year since I told my friend Dylan I could give it all up. I could stop climbing. I can’t stand behind that idea now, but an hour into the approach to the North Six Shooter, half way up a blood red scree field, it seemed to make sense. Yeah, whatever, I can do without this, I thought. The glossy, pocket-sized topo we bought in Moab was mostly for show at this point. We paused in the middle of the crypto-biotic field, looked at the dotted line weaving through the blank space on the map, then continued our terrible game of hopscotch from one cow hoof-print to another. 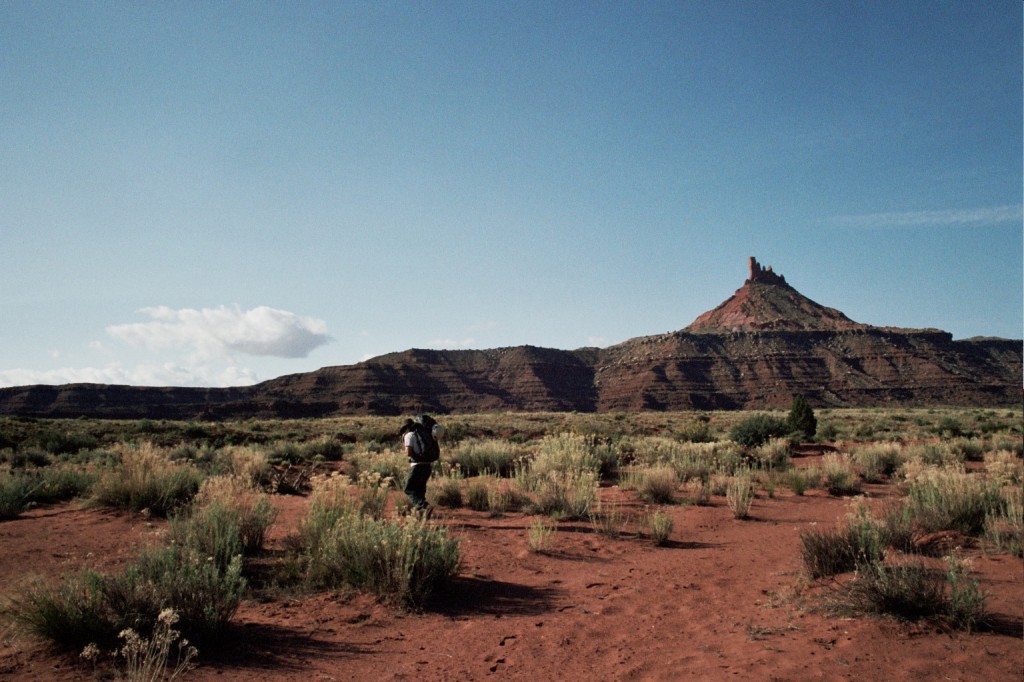 I imagined what this approach must have felt like in 1979. Thirty-some years later it still feels like a heroic quest. Climbing in the desert distinguishes itself from other styles with the feeling of inadequacy it gives you. It never really feels easy, at least for me. And sure, it feels good to surprise yourself with success sometimes, but the vast majority of days spent climbing in the desert can be summed up in the idea that everyone who came before you was bolder and stronger than you’ll ever be. 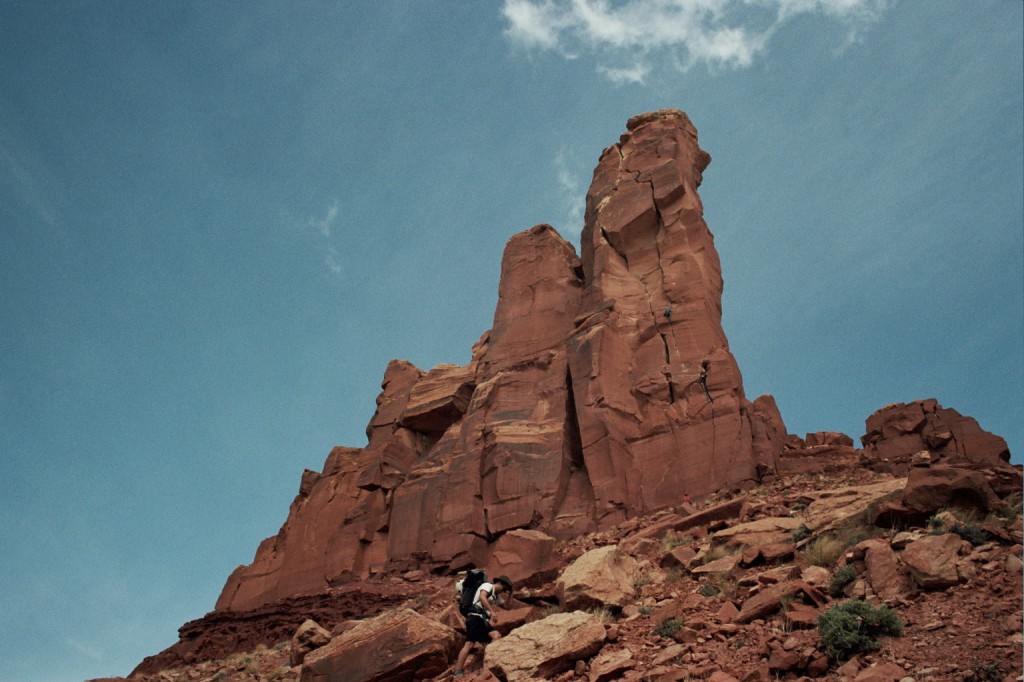 We thought the first pitch, an ever-widening finger crack, would be the crux of the route. I think that’s what the topo said, anyway. Dylan started us off in good style, climbing quickly and silently. I sat among the fallen boulders waiting for Dylan to put me on belay and obsessively adjusted my tape gloves. I need a new hobby, I thought. I should have been born a bird. I should start baking. Maybe I could go to grad school? Yeah, I could quit this sport.

Within minutes, I was hanging next to Dylan, reluctantly taking the gear off his harness for the next pitch. After an eternity of hesitating, chalking up and complaining, I relented to pull on some gear. Should have stayed at the Philly rock gym. I climbed through the crux section in a hybrid style climbers call “french free”, a term used to describe the moment when you’ve given up on good style.

Upon arrival at the belay, Dylan was quick to tell me he was scared for the next pitch. I nodded. Fuckingofcourse you are, I thought.

At least there were no other parties behind us. We’d surely be holding them up. Afternoon thunderheads swelled above the Abajo Mountains. The third pitch followed a left-trending arch to a sheltered alcove overlooking the previous 300 feet. After a few moments of futzing around, Dylan climbed up to the alcove. From this spot, he called out to me to watch closely. His feet left the perch, swung out towards the canyon, and with a hurried sort of grace, Dylan pulled over the lip toward the last belay.

The relative security of the final squeeze chimney gave me a rekindled confidence. I stormed toward the summit, pausing before I pulled over the edge to howl down at Dylan in utter ecstasy. 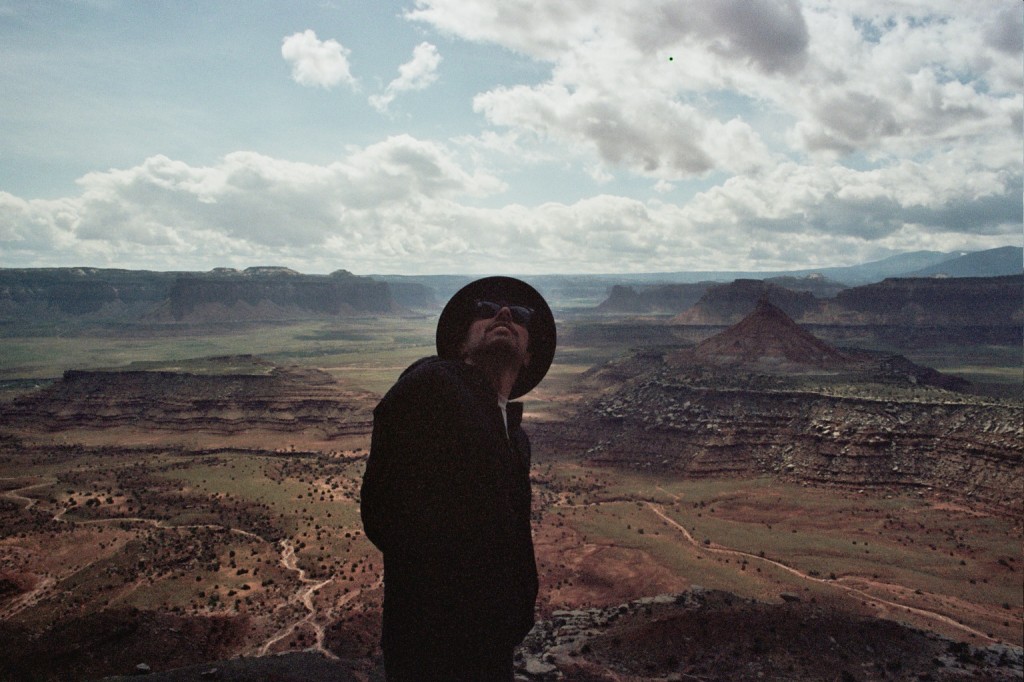 I used to think about the immensity of outer space. When I passed people on the sidewalk, I’d wonder how often they consider the boundless universe above their heads. It would frustrate me that no one bothered to acknowledge this mystery. But here, in the desert, taking time to worry about the universe feels unnecessary. Around each bend of the canyon, yet another red canyon, each with it’s own vertical sandstone walls. And each cliff presents a new human-sized crack, purpose-built to test your composure. From our perspective atop the North Six Shooter, the desert stretched on endlessly. We were sitting in the middle of a sandstone fractal.

While the thunderheads ballooned upward, I told Dylan it was true: I could quit climbing, because that’s not the part of this that keeps me coming back. I’m not one to try to wrap the spectrum of emotion we were feeling into one trite summary, but what matters to me is having a sense of scale in this world. It’s easy to narrow your field of vision in every day life, to shrink what matters until it fits onto your hard drive. It’s not as easy to feel small. I’ll keep coming back to climbing because I need the balance of perspective.

I'm one of the lucky ones. An air-breathing, sun-soaking, full time enthusiast.
Website: http://www.rileypatrickwest.com
Read More Posts By Riley |
Follow: