Sand in my palms, rubbing against the wetness of my shirt, I brushed myself off and attempted to shake my mind back into calmness.

I always believed that the world becomes more acute and clear when in the face of fear.  Fear is always a relative term.  Some people are afraid of flying. Some are afraid of falling.  At this moment, I was afraid of both.

“Lam! Get in the corner.”  Hopefully he heard me.

I braced my hand up against the microwave size chunk of stone, perched and ready to fly.  I had made the mistake of touching the hold on this block.  It shifted it loose.  And now the only thing between this 60 pound hunk of calcium carbonate and my partner’s head was my outstretched arm holding it in place. 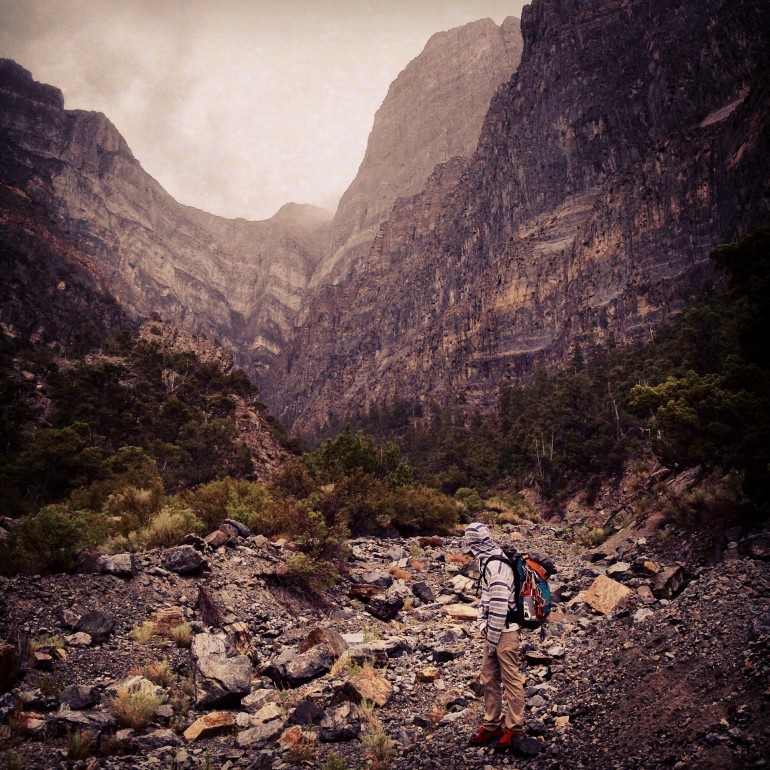 The drainage leading to the north face of Notch Peak

Two days earlier we were busting down the old highways through the West Desert of Utah on our way out of the incoming rainstorm that was soaking the Salt Lake Valley.  It was Memorial Day Weekend and we were on the search for solitary confinement and to rid ourselves of the urban grind. We thought we would find no one in the House Range – a north to south mountain range located 3 hours south/southwest of the Utah Wasatch Front.  The main climbing objective was to do a route on the North Face of Notch Peak – a towering 2,200 foot limestone wall, as well as a few of the granite routes located in West Sawtooth Canyon.  As we turned down the last dirt road headed to the camp, the sun had descended, and we could see the flickering of campfires.

“Well … at least whoever is out here is of the same breed” – the wandering climber who thought they had the scoop on everyone else.

As we pulled up, we discovered it was primarily a group of friends of ours along with a few other climbers we would come to be quite familiar with. With Lam’s truck we were able to camp higher up the drainage as we could manage the section of road the clan of Subarus couldn’t.  We tried out the Black Diamond Mega-light Mid tent and were super psyched at the amount of interior space.  We laid our heads down, psyched for the early morning start and the immensity of the route before us.

I awoke to the sound of another party of climbers passing our tent and making their way up into the drainage headed to Notch Peak.  The skies were a dark grey, it had rained some that night, but the forecast was for clearer skies.  We threw back some water and cookies, and started up the trail.

The upper amphitheater on the approach to Notch Peak

2 miles in and 2,000 vertical feet gained along the trail – the rain began to set in.  The sky opened up, and the seemingly harmless drizzle became a downpour.  I wouldn’t be surprised if this region got less than a dozen storms all year – and yet we found ourselves hiding beneath a massive juniper, waiting.  We saw the party ahead of us, they had opted for a route on the lower tier “Western Hardman” – they sat huddled at the base of the route.

We called it for the day.  Often, we are bested by the unpredictable powers of Mother Nature, and we must submit our resignation in the face of its unrelenting onslaught.  Besides, granite dries much quicker than the porous and seeping limestone.

Back at camp, we slept.  We let the soft rapping of rain on the tight tent whisk us back into our mid-morning slumber.  Awoken to the silence and the rising heat, I stepped out and ran my hand against the nearby boulders to find them quite dry.

We took the short hike into Sawtooth Canyon and simul-climbed an amazing 5.6 – 3 pitch classic – “Candyland”. This protruding and prominent dike runs for 250 feet across a dome of pink colored stone.  We launched up a few other bolted dike routes, a classic 5.9 and a deceptive 5.11+ with wicked layaways and lunges. The day was late, we cooked up some BLT’s, drank beer, and readied ourselves for another try at Notch Peak in the morning. 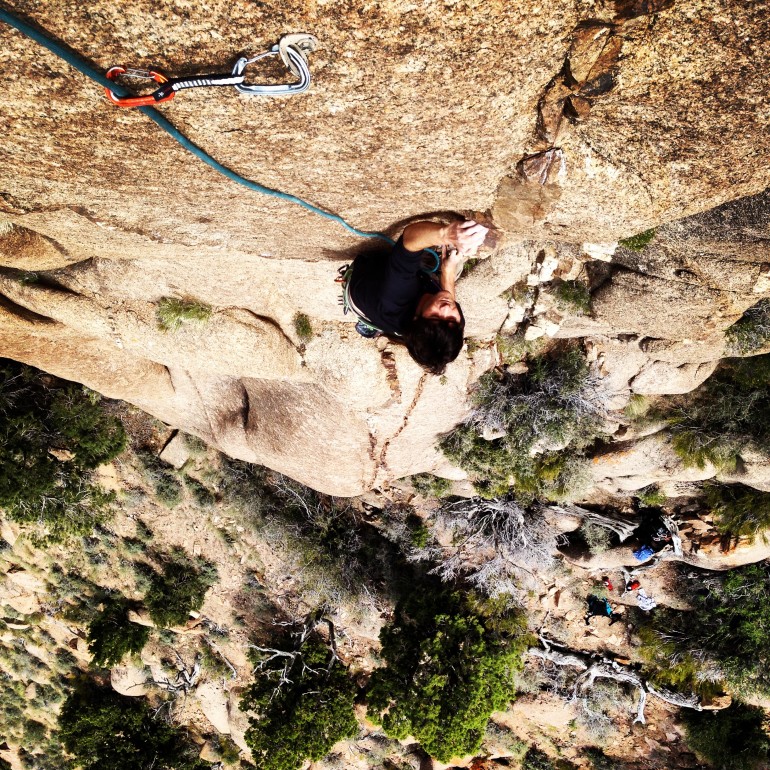 Again, I awoke to the sound of a party passing our tent, an hour earlier this time, before the sun had graced us with its presence.  We high tailed it up the trail, making better time than the morning prior.  We passed a party headed to the north face about half way up the trail, they seemed discouraged – we wanted to be cordial and stay behind them, but they were moving quite slowly and we wanted to be up on top by a decent hour. 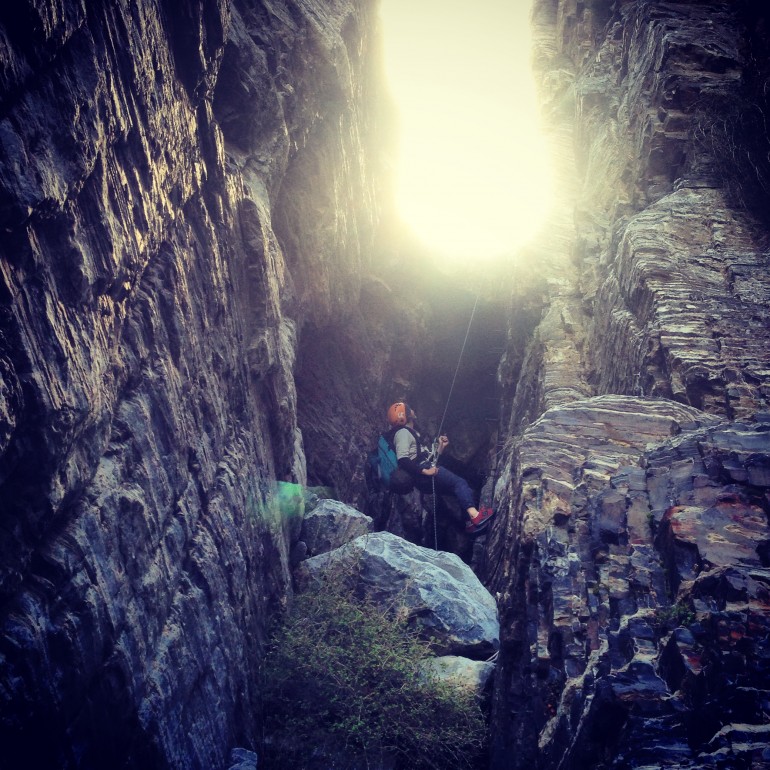 Rapping down the via-ferrata portion of the approach, in the waning morning light

Near the end of the approach, the trail narrowed into a wash and a series of boulder hops, fixed rope lines, and a via-ferrata – essentially a rebar ladder – led to the traverse that dropped us at the base of the route.  We had gone from camp to the base in a seemingly brisk 1.5 hours.  The guidebook gives the expectation at 2.5 hours.  We were stoked.  We flipped a coin to see who would lead first.  Lamwise the Brave got the honors.

And then the nightmarish journey began.  Lam made fair work of the pitch but had to climb slower than usual due to chossy and loose rock.  The bolts are also quite spaced and it took effort to move through sections of climbing in order to safely move on.  As I followed the pitch, I ripped off a toaster size block of stone. I was concerned, but unwearied.  I made it to the belay, gave Lam solid props on the lead and we both knew what we were in for. 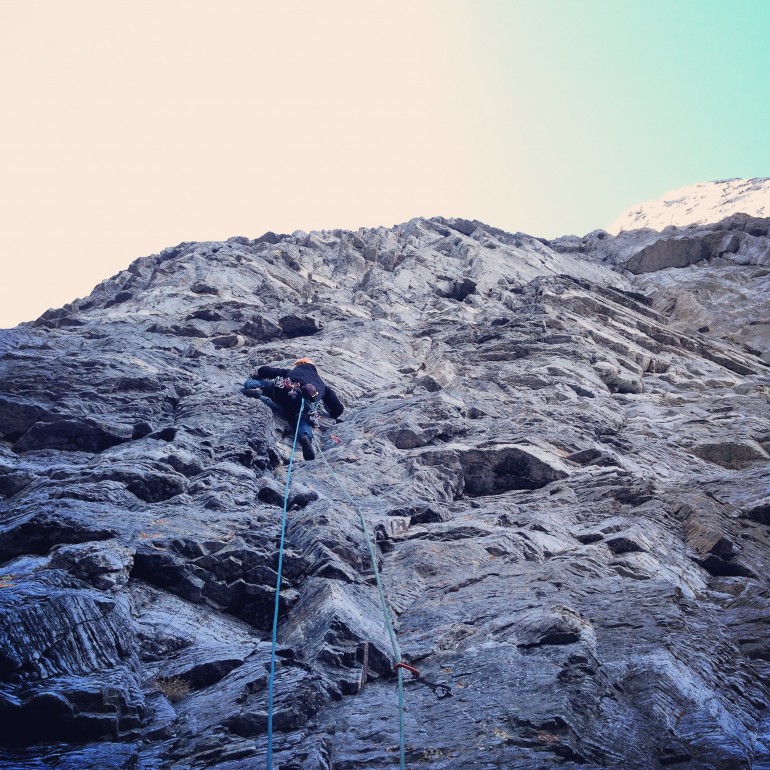 I managed up the next crux pitch in poor style, but the rock quality, odd bolt placements, and sandy holds made this pitch quite more serious than it would have otherwise been.  I brought Lam up and he swung up the next pitch, quite easily, but, as before, wrought with piss rock and poor climbing.  Adventure limestone at its finest.

I made it to the belay, we swapped gear, and I took off on the sharp end. 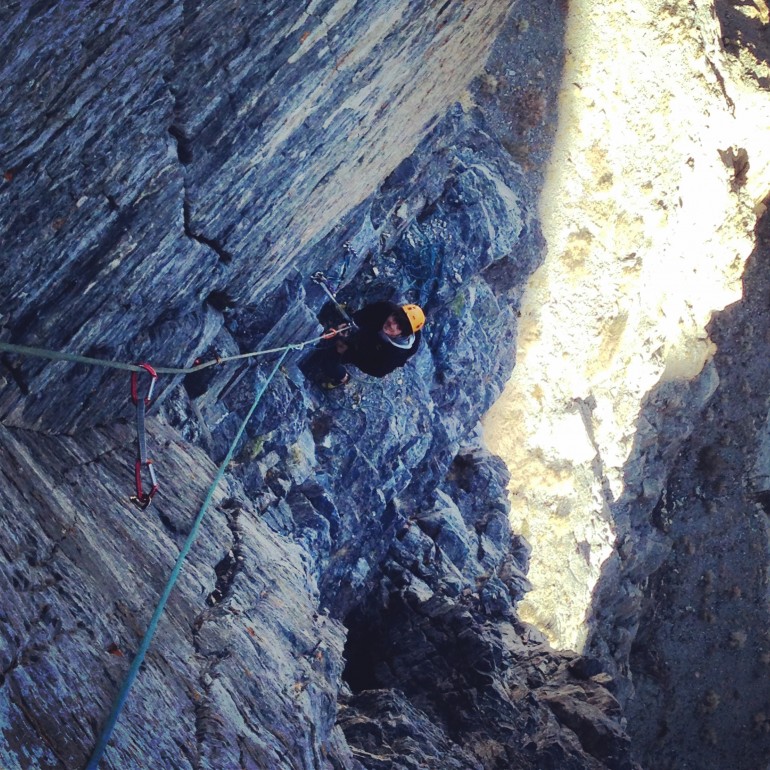 The fourth pitch and first pitch of decent climbing

This next pitch inspired in me that not all of this climbing was going to be trash.  I delicately climbed the clean gear protected dihedral, it felt good to pull on sound-ish rock, and not have to expect such heinous looseness.  But I suppose I let my mind believe this too quickly.

At the terminus of the dihedral, more loose rock and choss.  I placed my feet precisely and chose my holds with much discretion.  I clipped on of the few bolts on this pitch, pulled up into a massive hold and reached up.

The loose block that subsequently shifted from its perch was massive in the relative sense.  The same shape and size of a microwave, sharp edged, and weighing close to 60 lbs – it was what I would refer to as a death block.  I pushed back at the stone, held it in place.  I yelled to Lam to hide in the corner at the belay.  I instinctually and as manageable as I could muster, let the block loose with a hard shove to my right.

It sailed for a moment.  Crashed into a ledge a few meters below me, exploded into two large pieces and went flying.  It ricocheted down the wall and vaporized as it hit the base.

I paused. Waiting for something.

I’d had it.  I down climbed a few meters to the bolt, placed a bail carabiner and told Lam to lower.

I reached the belay.

We both took a second to reconcile the moment.  He claimed one of the two pieces had come within a few feet of him on its gravity flight to oblivion.

I set up the rope to rap.  We made the hard choice of knowing when enough is enough.  There were new days to see and greater adventures to prospect.

At the base of the wall, we drank our water with a stiff fervor. As we headed down the “trail” we kept recalling the incident and our prosperity. We made it back to camp before noon.

After an event like that, it seems that the world becomes a bit more acute to the senses and the reality of each situation sits more heavy on the mind.  The sensibility in our actions, the choice to bail and climb another day  – as rational and correct as it was – sat with a bit of disdain in our heads.  It’s not an ego bash, but no one wants to effectively choose to fail.  But is it failure in the traditional sense? No. And here with hindsight, I find myself in the same reality. 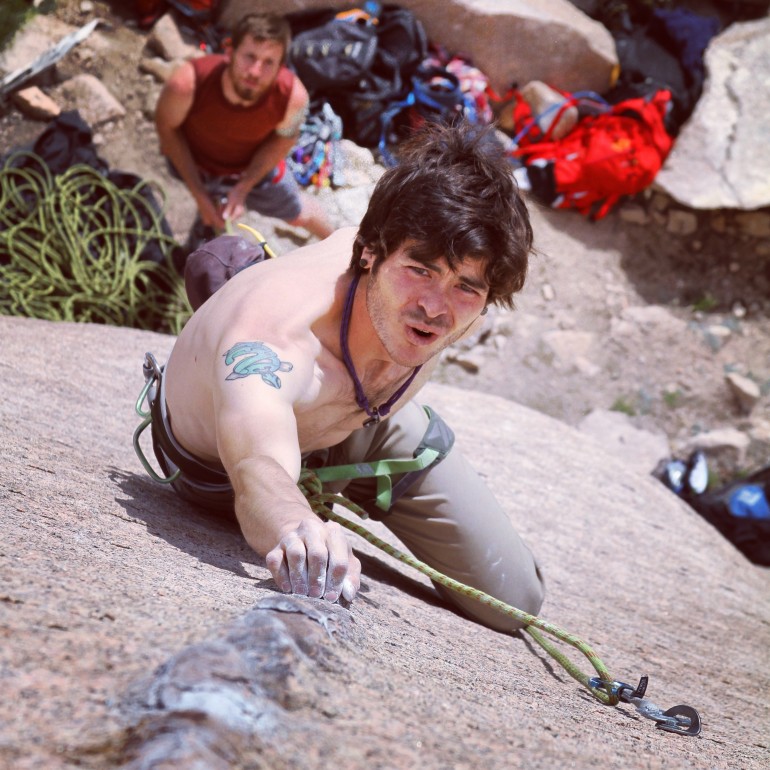 We climbed a mega classic line that afternoon with friends.  The rout – “Anti-Crack” 5.11 – is a phenomenal quarts dike, protruding out, the width of a handcrack and featured to the point of passage.  We all took laps; I whipped off of the increasingly warming holds and respectfully enjoyed the flight.  We drank our fill of cold beer and appreciated the small stuff.

The sunset was quite cliché that night, setting out over the vast west desert, cascading gold and scarlet through the vacant spaces.

I slept calm and fair.

It seems that it often necessary for me to reproduce a sensation in order to finally cleanse myself of the emotion.  After the previous day’s challenge, we wanted to find ourselves on a clean slate.

The route we had simul-climbed earlier that weekend, “Candyland” seemed like a perfect retribution.  We decided it was easy enough and having now scoped it out, we could solo.  Our friend Derek joined us as we slowly, like ants on a log, climbed up the projection.  In the silence, only broken by the soft sound of our breaths and the whip of the wind, the tranquility of the environment overwhelmed. 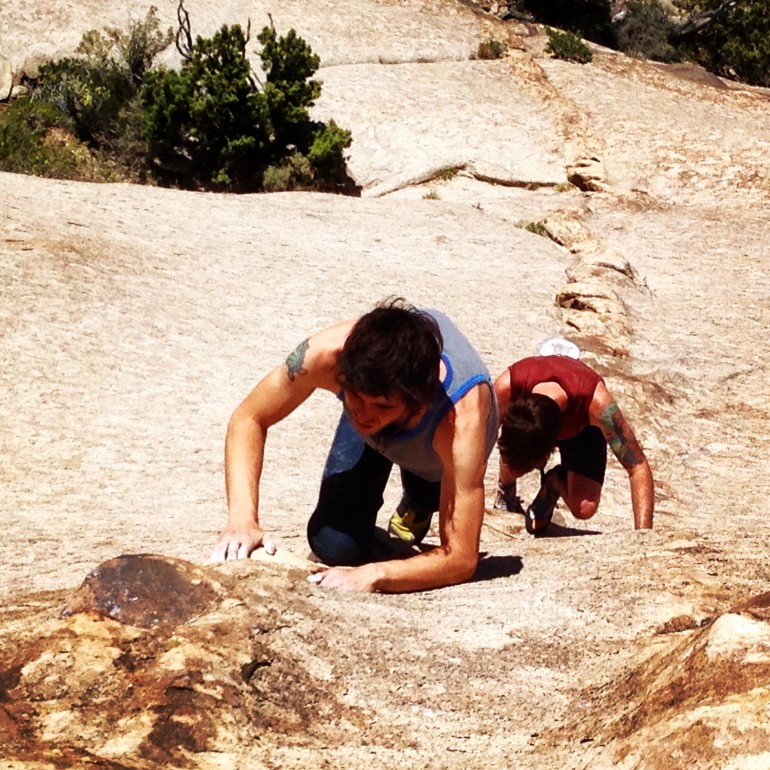 We said goodbye to our friends, we packed up, got back into the workhorse of Lam’s Tacoma and barreled down the dirt roads back to civilization.

By the end of it all, we had increased our mental repertoire, found the limits of our rationality, and perpetuated our drive for the challenge.  I remembered somewhere along the trip, in a moment of distinct clarity, I had reminded myself of who I am – and who I would like to be.  Tomorrow –  I forever beckon its welcome. 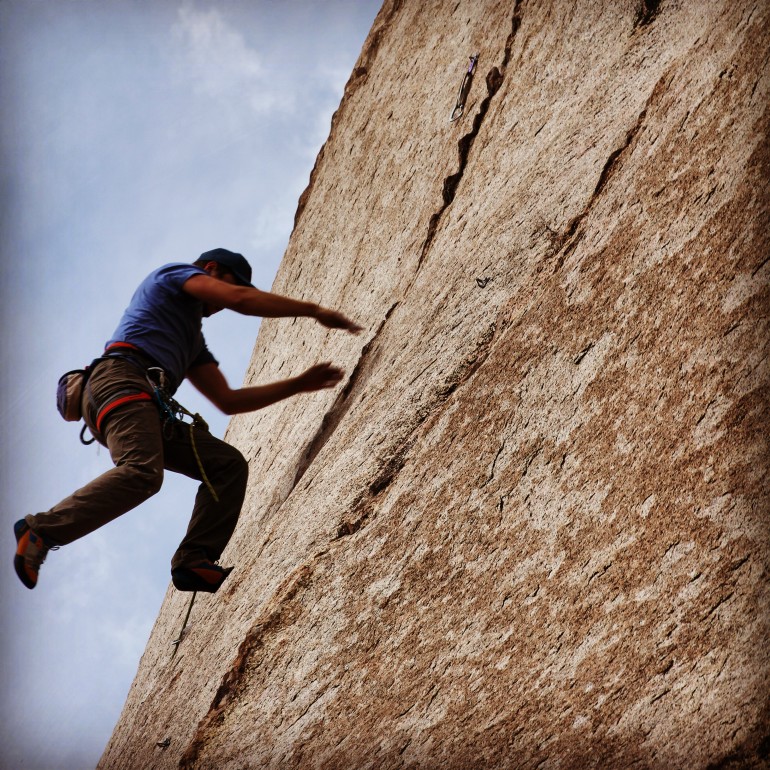 Me taking the whip on “Anti-Crack”