Winter Magic was a day reserved far ahead of time in my calendar. I believe it was actually November when my friend Mike told me about it during our final ride of the season on our fat bikes’ skinnier tired brethren.

That’s what he said… or something like that. I’m probably misquoting him, but the important thing is that it was going to be sweet, and who doesn’t want to support their friend’s event, right?

Fat bikes are the newest segment of the mountain bike market, yes. However, I am not here to argue their merits. Neither am I going to try and convince you that you need one (you do!). If you love to ride and you want to ride all year, fat bikes could be the answer, as they are for most of the riders in Hinton and Jasper, Alberta.

For you see, folks in these parts ride trail all year long, despite the snow, ice and chill of winter. A handful of the trails in the network get ridden over and over, groomed by tire, snowshoe, and general stubbornness. Like skiing and snowboarding, fat biking is very conditions dependent. We often get chinooks and big dumps, sometimes in the same month or even the same week. Luckily enough, last Friday Ullr blessed us with a fresh dump of wet, bondable snow to tame the icy trails just in time for this magical day of love on two fat tires. 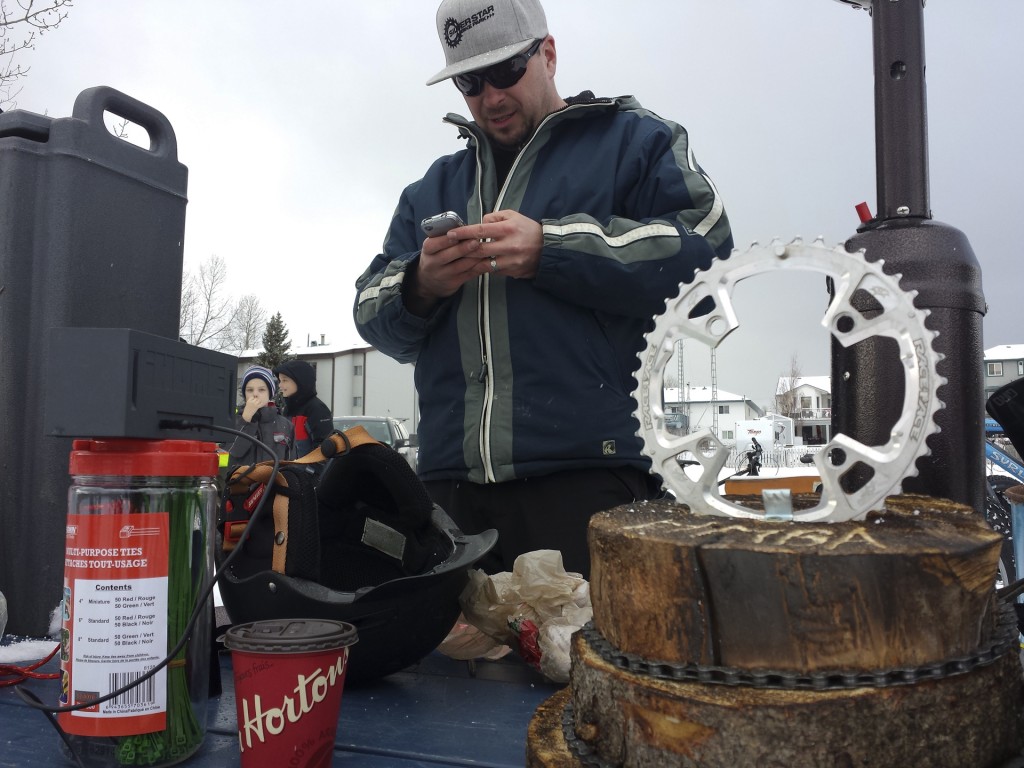 SO, WHAT IS WINTER MAGIC?

The Hinton Mountain Bike Association (HMBA), like most other cycling associations, wanted to draw people out to the community and show them that:

Enter Mike Mahoney; a Jasper Paramedic, and Hinton resident. Mike also happens to be the most passionate cyclist I have ever known. In terms of fat biking he and his co-worker, Rob Prinz (the other Jasper Paramedic), have logged thousands upon thousands of kilometers on their co-owned Surly Pugsley over the past four years.

“That bike literally gets ridden eight days a week.”

Rob told me this over beers after the successful day. Long story short, that Pug gets ridden every day they have off, and on shift change days it gets ridden twice. Mike had the idea of stepping up winter trail management to make the riding less dependent on the conditions, more consistent, safer, and a whole lot more fun. He and his neighbor, fellow super stoked cyclist and co-groomer Mike Langford, had bought an old snowmobile that they would use to pack the trails and get them railing.

However, trail grooming for winter fat biking is a “newish” and evolving art. With the dogged determination to do it right in mind, and faith it would all work out, Mahoney personally sought out and bought a custom 28” wide groomer to tow behind the sled. 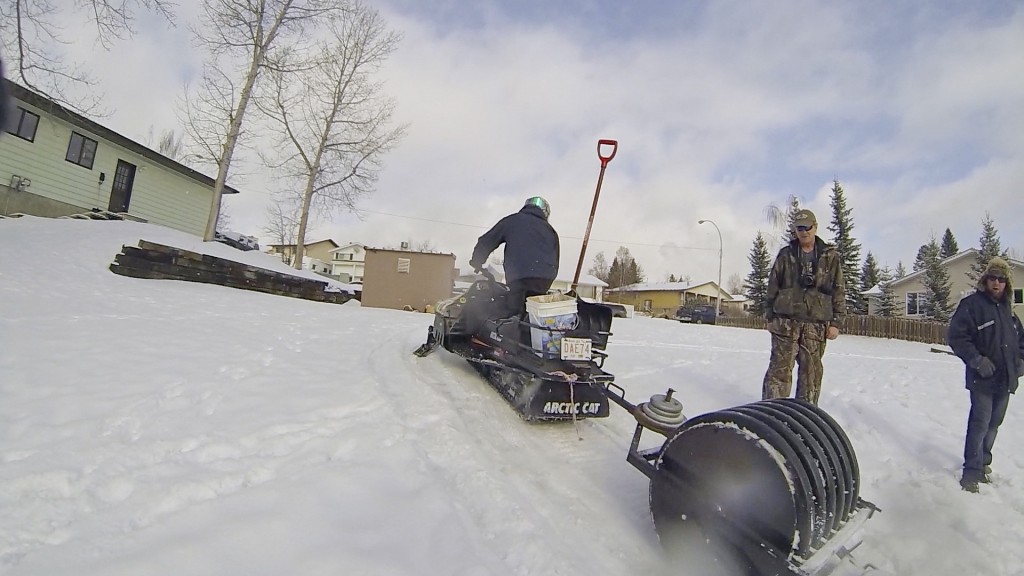 This tow groomer, next to their remarkable unrelenting drive and hard work, would quite possibly be the most important reason Winter Magic and the winter trail project didn’t just happen, but succeeded so remarkably. Also, Praise Ullr! 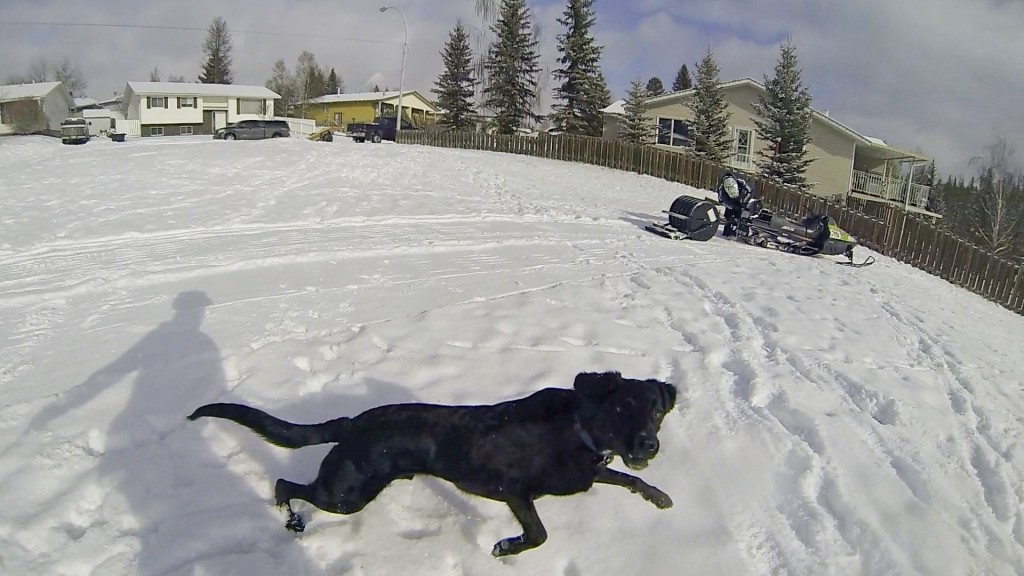 At the beginning of fat bike season, or as I like to call it, ski season, Mahoney gave me the low down for the proposed event. The race/festival/demo day would take place on Maxwell Lake, home to the Beaver boardwalk. It is a series of elevated wooden walkways winding in and out of the forest, and around the marshy ring of the lake.

Maxwell Lake flanks most of the towns trails, and serves as a jump point for many local riders to hit the town’s large network of purpose built mountain bike trails. These trails are cared for and maintained by HMBA volunteers. Local businesses and industries who donate the capital, and Norco Factory pro rider Jay Hoots’ trail building company “HOOTS”, all play heavy hitter roles in the on-going maintenance, creation, and upgrading of the trail network. The town itself also plays a huge role, as they set aside the land and development access for all this to happen. But I digress, because all of that is really an entire post on its own. 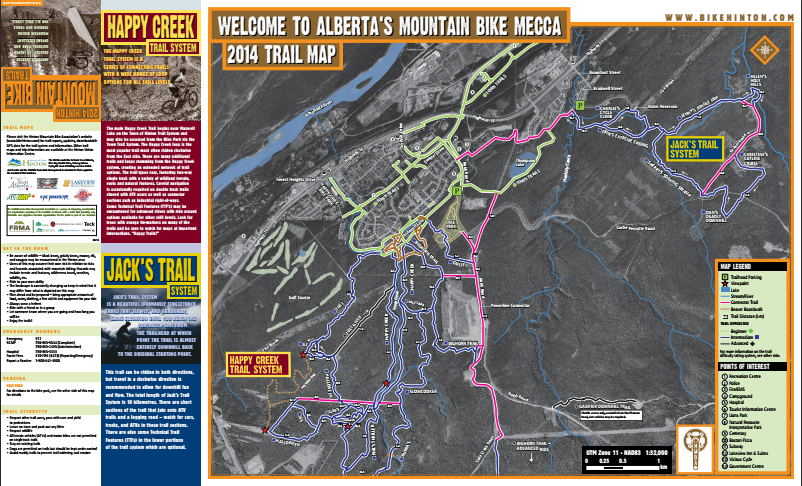 This would be the first year for machine-assisted trail grooming in Hinton, and if it was done right, with few ruffled feathers perhaps, we could look forward to many more.  Mike really took that to heart. Now, it wouldn’t be fair to give him all the credit and he would be the first to say so. This was a great big community initiative, hosted by the HMBA, whose volunteer staff and members furiously planned, gathered sponsors and promoted the day months and weeks in advance.

Our local bike shops Freewheel Cycle, Vicious Cycle, and Source for Sports brought out a heaping fleet of demo fat bikes. There was every variety from Ice Cream Trucks to a few carbon Beargreases, as well as a whole lot of booty. Boston Pizza was dolling out 15% discounts to anyone who “Rolled a fatty and had the munchies”, as our epic race announcer Chris informed us. Tim Horton’s brought out the hot chocolate to keep us fueled and keep the groms stoked. The entire event was free to enter, and run by our passionate and loving HMBA members. 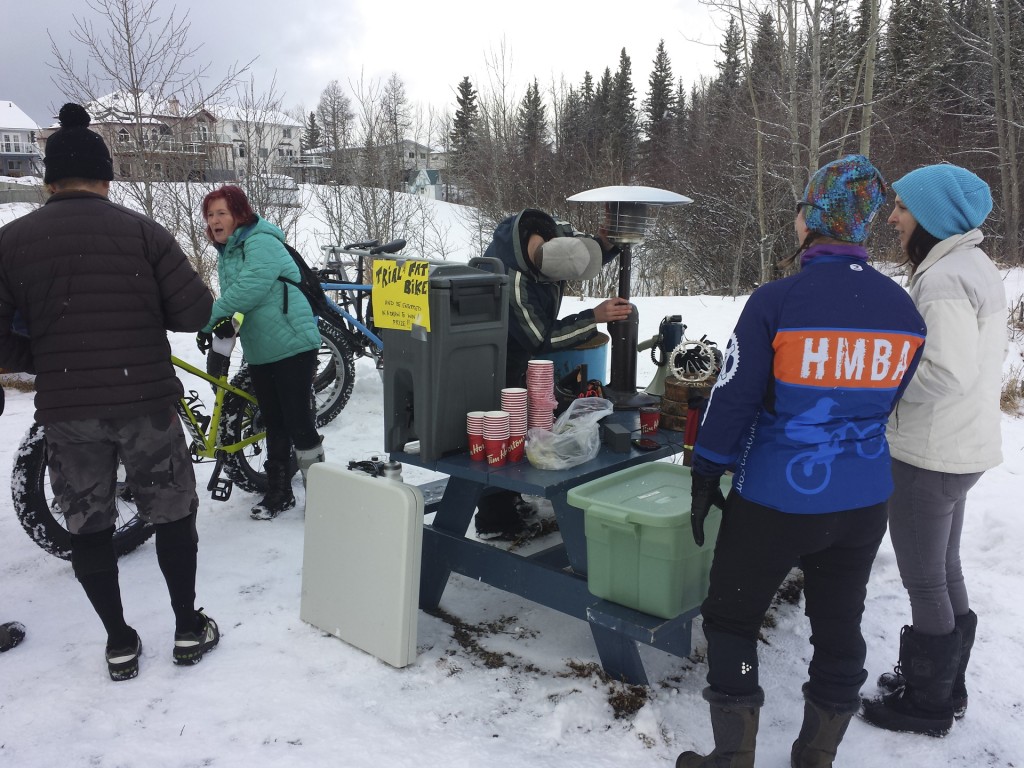 It went down like this: We had ten riders who would be randomly paired into teams. Then, do as many laps in relay fashion as your team could muster in a 30 minute period. The race course, planned and designed by Mike Langford, was a 1.5 km loop around the lake. It weaved into the town trails and the forest a few times, over the boardwalk, had a climb about two thirds of the way through, and ended with a blitz downhill to the finish, keeping you interested as you tagged your partner off.

It was a very smoothly run event and obviously not everyone’s first rodeo. Corinna Mahoney handled the timing, keeping everything buttoned down and fair. Our announcer Chris did a fantastic job keeping everybody smiling, laughing, and totally stoked. We had photographers, demo bikes, door prizes, draw prizes, a trophy, and one helluva great time! This event truly showed me just what a strong community can accomplish in the spirit of advocacy, fun, and the value of sport. 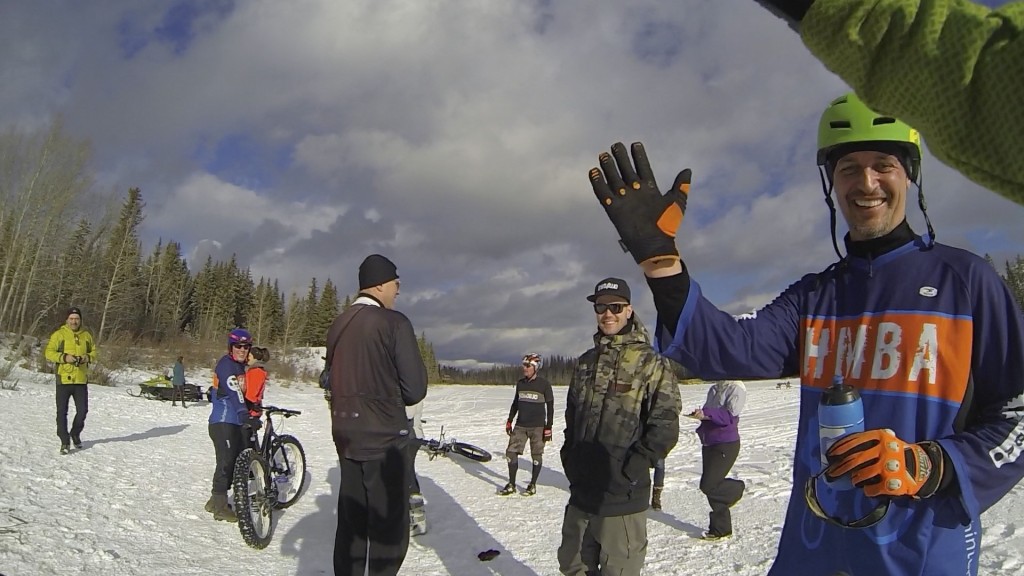 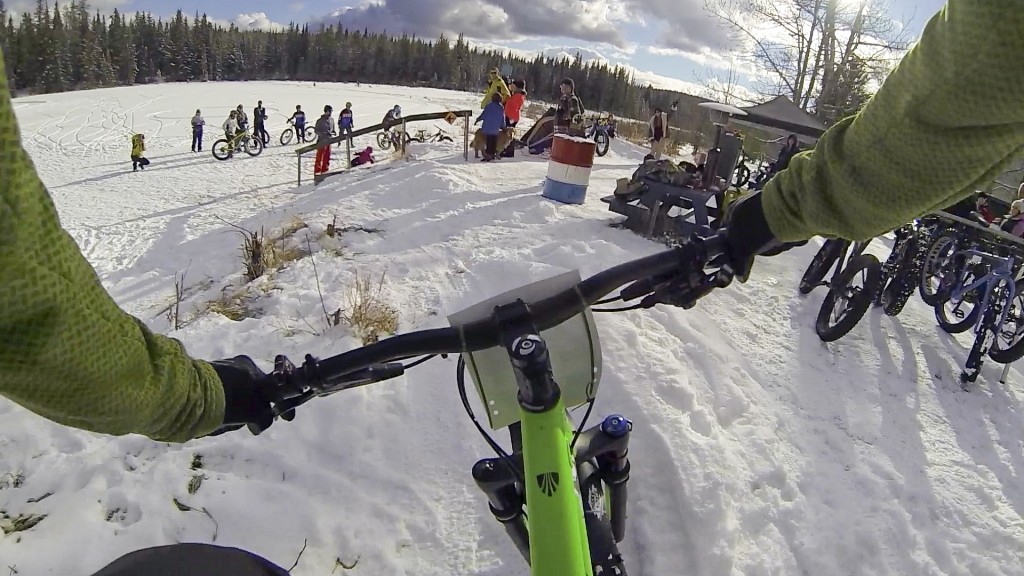 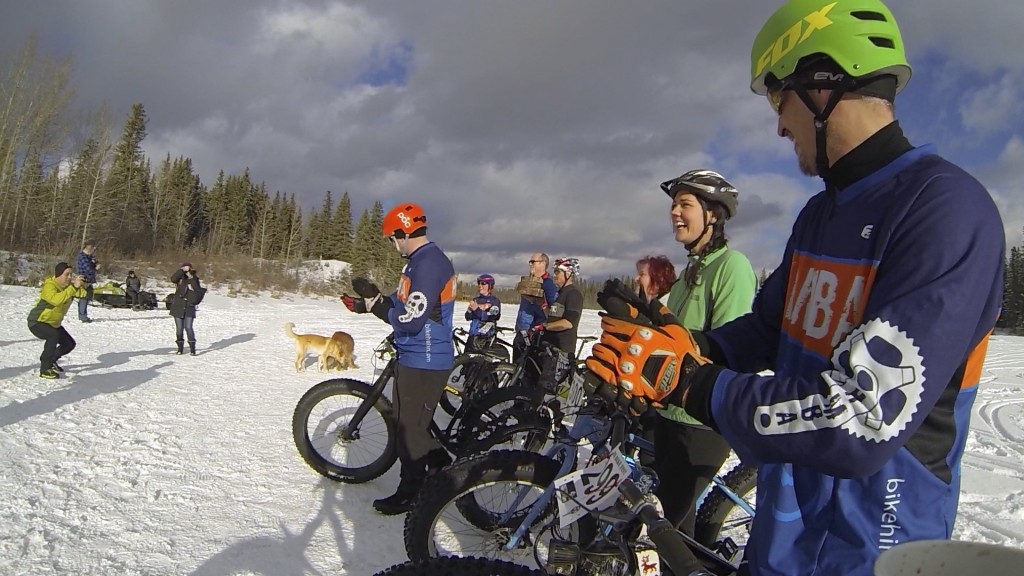 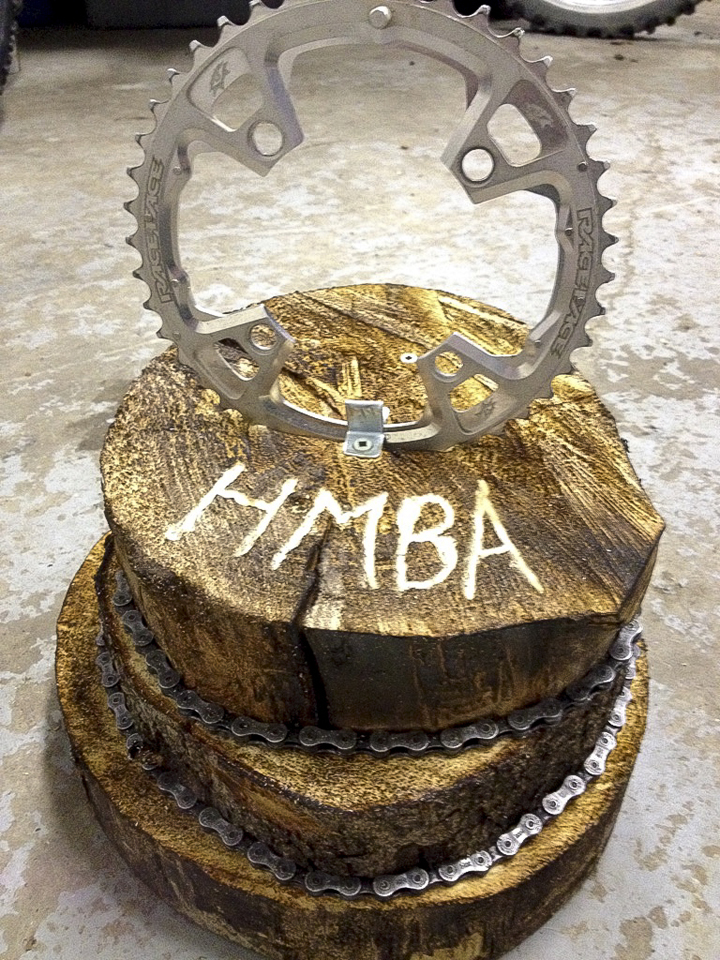 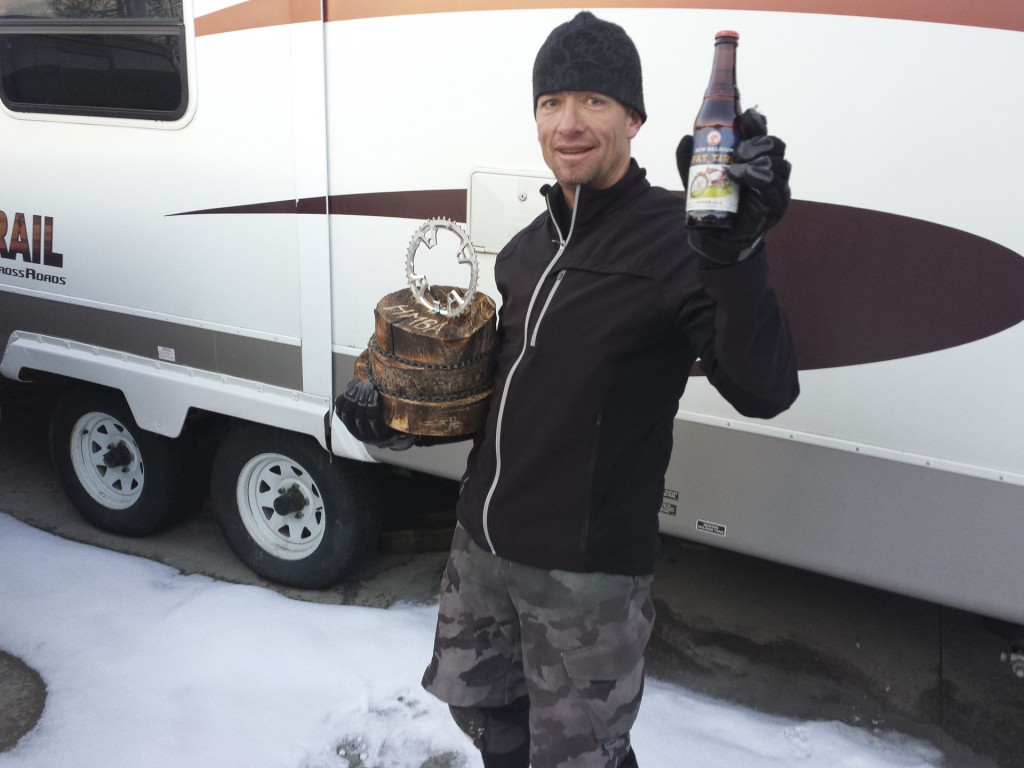 Perhaps the only thing better than the race was the après ride up ‘The J’ to the view point and down ‘Just Giver’ with the boys. Plus, our massive carb loading dinner at Boston Pizza. Being fat bike drunk does come with a hang over though. Nothing another beer, another ride, and the pure stoke of friendship by bike couldn’t fix.

My Mother and Father gave me a love for the mountains, for the peace and the challenges they can offer us. “Go west young man” Dad would say, and into the front ranges we would go. West has always felt like the right way to travel. Often I would ask how much further we had, and every time, his answer was “just around the corner”.
Read More Posts By Jay |
Follow: