Rollin Dubs in the PNW

I met the homie Lucas Robinson down at Woodward and he decided to road trip up the coast with me and my Brother-from-another-mother Adrian Martinez, and we eventually ended up in his hometown. After a summer of toddler sized bicycles, learning the native lingo, and living out of a tent and a Forester along the coast I found myself in a little blip on the map called Bellingham. Bham, as we affectionately call it, is a little town in the most northwest pocket of the country. As an east coaster originally, I was totally taken back by the compost bins in restaurants, Jerusalem cruisers on everyone’s feet, as well as the 81% overcast days per year. Certainly not the SoCal weather that you see in most BMX edits online, so you can imagine my surprise when I found a tight knit little scene of shredders who were down to make the most of the remaining summer, dodging rain spurts, drying spots with old clothes and towels, and dealing with the bipolar weather that makes the PNW so dreamy.

This edit we threw together I think really highlights the good vibes, friends, scene, and weather that we were able to squeeze out of the last ray’s of sunshine this summer blessed us with. I’d like to shoutout all the homies who were a part of this little project, and anyone who has showed us love around the way.

I asked Lucas to really explain the scene in the Northwest and here’s what he had to say:

At first glance in Bellingham, one might not pick up on the subtle hints of a bmx scene. It’s pretty tucked away and could certainly be glanced over. However, the scene in Bellingham really seems to represent what bmx is after all the bullshit is dropped, trends come and go, high seats, low seats, pegs, brakes, riding street, dirt, and park; the list could go on forever. Though all the guys in the scene come from different backgrounds and like to ride different ways, we’re all united by the fact that we just want to be out on our bikes whenever we can, having a good time with the dudes.

Bellingham isn’t SoCal, on average we get rain 168 days a year which pretty much chops your chances to ride in half. We have one skatepark to serve the city’s 80,000 people (which is overrun with lowlifes), a hidden trails scene tucked back in the woods, and though we have some good street spots you have to put in work for it. Bmx isn’t perfect, and it’s not meant to be. bmx is different. bmx is staring at a jump for 20 minutes trying to get your balls to descend from your stomach. Bmx is slamming your body into pavement one second and throwing yourself down the rail again a second later. Bmx comes in a lot of shapes, forms and sizes. From hundreds of riders swarming the streets of LA at the latest sponsored jam, to a couple homies riding the local cut between patches of rain, bmx is and always will be there. Sometimes you just gotta look for it.

More on the way this year as we plan to film a real project so if you’d like to spice up that feed with some hot fire or good laughs just holler at us on Instagram: @lcs_rbnsn & @vacuumssvck P.S.- Let us know what you think of the edit below in the comments. Love it or hate it speak up!! Deuces til next time! 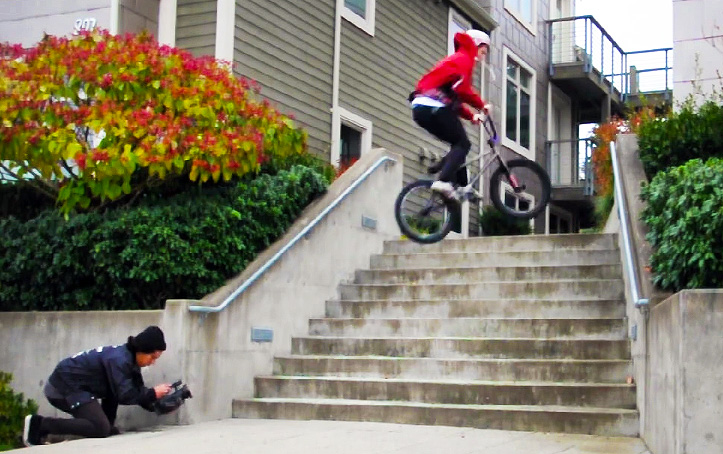 One thought on “Rollin Dubs in the PNW”